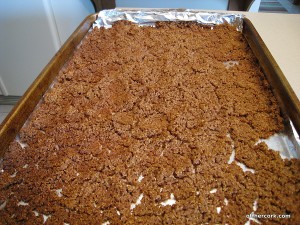 The idea of taking quinoa and creating a crunchy snack isn’t a new one.  However this is my take on the concept of “Quinola” which is like the second cousin twice removed and added back of the granola family.

This is the concept that made me fall in love with quinoa and realize that there’s more this little grain then just being regulated to standard side dish status.

Do you ever think that foods aspire to be the main dish? The star of the show?  Or is that just me?

Just me?  Okay then.

Quinola is super easy to make and put together.  It does take a while to bake and that’s the longest part of this recipe.

In a medium sauce pan add the water and bring to a boil.  Add the quinoa and cook until it’s done, about 15-20 minutes.  Fluff, place in a large mixing bowl, and then set aside letting it cool.

Once the quinoa is cool, preheat the oven to 350 degrees.  Add the cinnamon to the quinoa and stir.  Then add in the soymilk and peanut butter mixture, stirring till combined.

Line a large cookie sheet, either with parchment or foil.  If using foil, spray with nonstick spray.  Spread the quinoa mixture onto the cookie sheet in a thin layer.  Bake in the oven for about 50 minutes.

Yup, 50 minutes.  It takes a while to dry out and get crunchy.  When it’s dried out and crispy, remove from oven and allow to cool for about 5 minutes before eating. 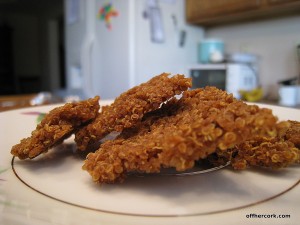 As the quinola is baking, you do need to keep half an eye on it just to make sure it doesn’t burn in places that are really thin.  If you’re using a convection oven, it probably won’t take a whole 50 minutes but will still at least take 30 minutes.

Quinola is crunchy and nutty.  The peanut butter gives it a nice background flavor which is accentuated by the cinnamon.

The first time Scott and I had this we fell in love immediately.  It is so tasty!  It is great to eat on it’s own or mixed in with some yogurt.

Kept in an air tight container, it lasts for a long while.  It’s a great way to utilize quinoa in a new way and if you’ve got leftover quinoa, a nice way to get it used up!