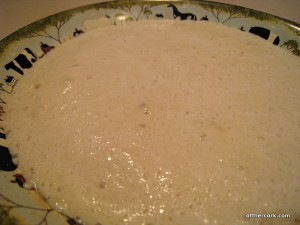 Pizza!!  I don’t know why it took me so long to finally post my dough recipe but here we are, woo!

Scott and I started Pizza Thursday I think in early 2009.  We love pizza and we decided that if we have it every week then we would be more open to playing with toppings and sauces.

Also because we have had trouble finding pizza we like in Columbus.  I know everybody has places they like but some of them are a little too far for us to travel for pickup for a Thursday night.

In order to satisfy our love for pizza we had to make our own.  I originally started out buying pizza dough from Whole Foods which was fine but it wasn’t awesome.  Plus it was pricey.  Yes it was still cheaper than buying a pizza out but if I made my own crust, I could save us loads of cash.

I searched around for dough recipes and started playing around with what I found.

It took me a few months to fully develop this dough and find out what worked for me and what flavors we really liked.  Once I got this down, I haven’t even looked at any other dough.

You need a stand-mixer for this, it makes life a lot easier.  If you don’t have one, you can probably mix this by hand but I haven’t tried that so I cannot make any promises!

In a small non-reactive bowl (like glass) pour in the cup of warm water.  Slightly warmer than room temperature but not “hot”.  You should be able to stick your finger in the water and keep it there without feeling like the water is too hot.  To the warm warm add in the yeast and sugar, gently stir.  Allow yeast mixture to sit for about five minutes so it can bloom.  The picture above is that of bloomed yeast.

Fit your stand mixer with the dough hook and add in the yeast mixture to the mixing bowl.  Add in the unbleached AP flour and gently mix for about 2 minutes.  Stop mixer and add in the spelt flour and 1TBSP of olive oil.  Continue to mix on a low speed.  At this point you will notice that more water needs to be added to help the flour bind and stick together.  Again with warm water, slowly add some to the mixture as it mixes.  About 1TBSP at a time.  Some days you might not need much and other days you might need a few.  Keep an eye on it as it mixes.  You’ll see the dough start to pull together and form a ball. You should be able to touch the dough and it shouldn’t stick to your fingers.

In a large mixing bowl, drizzle it with some olive oil and smear it around the bowl.  Once the dough has reached the ball stage, put it in the mixing bowl and turn it so that it’s coated in oil.  Drape the bowl with a warm damp towel and let it do it’s thing rising and going.

Let it rise for at least an hour and a half then do as you please with it.  Roll it out and start topping it for pizza! 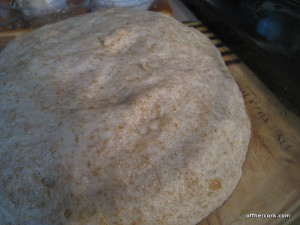 You don’t have to use spelt, you can use whole wheat, whole wheat pastry, or all AP flour if you want.  We just prefer the taste and texture of spelt.

You can also flavor the dough.  I’ve added herbs, hot sauce, and loads of different seasonings.  You will want to add those when you add in the spelt flour.  Not too much, you just need a bit to season the dough.

This makes a good bit of dough, enough for me to roll out to a rather large pizza.  It provides enough that I can have three pieces, Scott has four, and then there are four to five slices leftover for Scott to have later.  You can split it and make smaller pizzas.

Once you get used to making dough it literally takes at most 10 minutes and you’re done.  Easy peasy!

Just a tip, for those that are vegan, you don’t necessarily have to look for vegan specific dough recipes.  Most straight pizza dough recipes are already vegan because there’s no dairy or animal products in the dough.

Now there’s no excuse for you to not try making pizza at home!