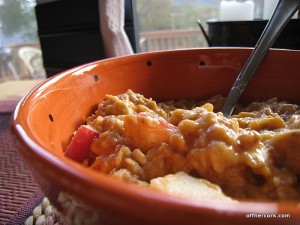 My love for oatmeal started not long after I started this blog.  Now I’ve always enjoyed oatmeal but I had a limit of what I could take in.  I could handle the texture and taste only for so long and then I had to call it quits.

Oatmeal was in my diet for the first half of my life.  I was a lucky person because my mom actually made me breakfast before I left for school.  I didn’t eat cereal or toast or something frozen that I heated up in the microwave.  My mom made me pancakes, eggs, and oatmeal.  Rotated of course, not all of that everyday!

It was your typical oatmeal though, quick oats with milk and then I added a touch of brown sugar to it.  Good but nothing fancy.  Then I moved on in life and sort of left oatmeal in the dust like that mix tape from your first love.

When I saw a lot of the healthy living bloggers dressing up their oatmeal it brought out my creativity and I fell in love with oatmeal.  Before I liked oatmeal, now we had an obsessive relationship complete me with leaving notes on it’s car and calling it at 3am.  Okay maybe no 3am calls but you get the idea.

There are so many things you can do with oatmeal that it boggles my mind.  I never thought about mix-ins and PB or anything added to oatmeal before.  This was a whole new world for me and I loved it.  I did all kinds of inappropriate things to oatmeal in order to keep the spark alive.

It also helped that I found my own “recipe” in terms of making oats the best it can be for me.  I use soymilk as a base and a smashed banana for sweetness.  I add in some cinnamon and ground flax at the end.

During this time I learned that my body LOVES whole grains.  It needs them and when it doesn’t get them, I notice a serious lack in my get-up-and-go.  I also have less energy and my digestive tract doesn’t feel as clean.  Whatever, I’m being honest, you’ll live.  Currently, I’m buying 5lb boxes of oats at Sam’s.  Not just one, but multiple at a time.  I think the checkers as Sam’s assume that I run a nursing facility with my large amount of oats and prune purchases.

Eventually, things sort of shifted for me and just like any relationship that has sustained itself for a significant length of time, I started craving the old and familiar.

My body wanted more whole grains and less flair.  I realized that I actually would rather have a HUGE bowl of oats over a smaller bowl with lots of bling.

Now?  I don’t even use mix-ins.  The craziest I get is adding in either some: 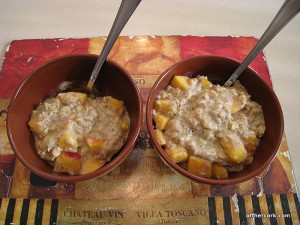 My breakfast is on the right and Scott’s is on the left.  My breakfast amount is roughly four times as big as Scott’s.  I can pack that shiz away, yo!  And on occasion I even finish Scott’s breakfast because he doesn’t eat it all.  Because remember, I LOVE to eat!

I will sometimes change things up and eat oatbran instead of oats.  It’s also whole grain and has the consistency similar to Cream of Wheat.  Same rules apply, total purist when it comes to that.  Just give me a big stinkin’ bowl of it!

In all honesty, I’m glad that this switch has occurred.  I feel better about eating a large bowl of grains in the morning and saving the snackies for just that, a snack.

How about you?  Do you eat whole grains?  Do you like oatmeal?  Do you even eat breakfast?

Just an FYI, if I don’t get breakfast I turn into a huge crabby bitch.  No lie, I don’t know how people don’t eat in the mornings because I will punch you in the throat if you stand in the way of me and some breakfast.  Actually I turn into a really crabby bitch when I’m just plain hungry and need food.  Same rules apply, so cover your necks** if you happen to be around me!

**Not that it would do you any good because I’ll just kick you in the shin instead.  Fair warning!