Warning: This post contains high levels of geek talk and gaming dialogue.  Levels of geekation might be affected and raised after reading. Common side effects are trigger finger syndrome and the occasional need to talk in military terms. Example, “Can you pass me the sugar that’s at your 3 o’clock? Over.”  Read post at your own risk.  Resistance is futile.

Wednesday Scott and I had a meeting to attend and then afterwards we hit up Target really quick for a few things.  Why I can only find Tide Free HE at Target is beyond me, but it is what it is.

When we go to Target we split up because I want to scan the workout aisle and also the sales racks.  Oh and shoes.  Scott doesn’t want to look at that stuff and quite honestly I don’t want him up my butt as I’m checking out the 50% off deals.  Once I was done looking at stuff, I headed into the men’s section to check on deals there and see if there was anything for Scott.

I don’t know about your man but mine, if left to his own devices, will never ever find anything that he likes.  Yet when I rewalk the section with him pointing stuff out, I get the “Oh I didn’t see that.”  “Yeah that’s alright.”  “Okay, that’s cool.”  Basically it comes down to the fact that he doesn’t really look.  This has led to me to just send him off to the tech section and then I’ll go through myself picking stuff out for him.  When I’m ready to hook back up with him, I’ll send a text asking where he is. Lord what did we do before cell phones?  Did we just wander the store aimlessly searching for our loved ones?

That is a long winded explanation of what I’m about to show you which is a text conversation we had with each other in the store Wednesday evening.

Setting: Me looking at men’s T-shirts at Target, trying to decide which one to pick up for Scott.

Scott: Is that a question? JL is DC comics, the others are Marvel.

Me: Where you at?

It was at this point a sales person asked if he could help me find anything and I explained that no, I already found what I needed.

Make sure you take note of Scott’s response because let’s be real, that is a total dorktastic answer.  I’m asking a simple question and all the sudden we need to be clear that there is a distinction and that we can’t just throw superheros together now.  There are rules!

Yes my husband was a comic person.  We have boxes of his comics that go with us every time we move. Those boxes are heavy and awkwardly shaped.  Scott is a dork (a hawt one though!) and really he doesn’t ever try to hide that.  He is who he is and he is very comfortable with himself.  I love that!

Because of him, I have fallen into the dork category.  He brought me over to the dark side.  Granted I’m not as knowledgeable as he nor will I ever be.  But after 13 years together, here are some of the things I know:

But best of all?  Scott is responsible for introducing me to the world of video gaming.  At first he was pleased with himself and now I can’t help but wonder if he’s feels he’s created a monster.  We currently have the new platforms, an Xbox 360 and a PS3.  We had a Wii but sold it because it was not our bag.

The whole reason we even have a PS3 is because at the time, Ratchet and Clank: Tools of Destruction was about to be released and only for the PS3.  Ratchet and Clank is a game series and one of my very favorite.  I HAD to have the new game which clearly meant we had to get the PS3.

Yes kids, I game.  I game as much as I can when I have the time.  Scott and I game together.  We play all sorts, from co-ops to single players.  When we play single player games, we just pass the controller back and forth.  It works out really well because we are each better at some things than the other.  Scott can drive and fly really well while I hate that shit.  I can find hidden treasures and secret entrances like nobody’s business.  Plus I’m a better sniper and our most recent completion of Army of Two: The 40th Day, backs up that statement.  I believe I ended the game with close to 500 sniper kills.

Gaming love has spilled over into other areas of life as well.  Christmas 2008 brought my gaming love to a whole new level.  I received two presents, one which made me squee with delight and one which made me cry because it was beautiful and thoughtful.

Squee: I got a Marcus Fenix Action figure who is a foot tall and talks. He sits on my desk and he is fantastic.

Cry: One of our very favorite games is BioShock.  If you’ve played it, you know that music plays a huge roll in the game.  We fell in love with the music but sadly the company never released a CD.  Bummer.  For Christmas that year Scott gave me this: 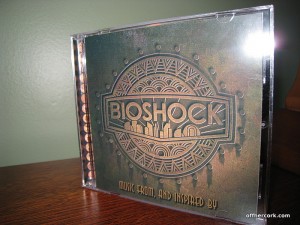 Sorry for the flash, it was the best I could get. Taking pics of CDs is surprisingly more difficult than I expected!

Yes, it’s a BioShock CD that he made for me.  He found all the songs (plus some others we just like) and bought them then burned them to a CD.  He found the art and font from the game and used it to make the CD.  Here are some other views of the bestest present ever. 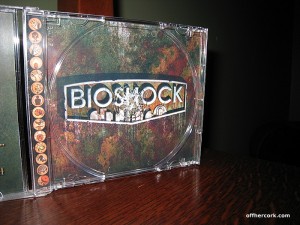 Other than a few twitter mentions, I haven’t really explained on here that this week is Birthday Week for yours truly.  For shiz!

For those that are new, we celebrate birthdays all week long at the HQ.  Sometimes we do prezzies each day and other times we focus more on events and food with a small prezzie on the actual birthday.  This year is a prezzie-everyday-year.  For Scott’s birthday week, the theme for his prezzies was Zombies and he got Zombie related items everyday.  I did this a few years ago as well and it was very well received, which is why I brought it back this year.  Please bear in mind that these are not large purchases.  Each prezzie is more like stocking stuffer type deal.  Small fun stuff! It is fun to open a present everyday! If you haven’t tried this before I highly recommend it.

Okay and circle back to me.

There is currently a theme going on with my prezzies and that theme seems to be gaming related!  Except for the first prezzie, which Scott did say was off theme.

Prezzie #1 was the Blu-Ray of Black Dynamite.  Totally hilarious movie which we adore.  Score!

Prezzie #2 is a novel explaining in detail the story of the Gears of War world.  It explains how it came to be and gives more detail into the characters lives.

Prezzie #3 is a Gears of War graphic novel explaining the story between the first and second game.

Prezzie #5 is a poster from BioShock.  If you take a look at the back of the CD up there, you’ll notice an image with a rabbit mask.  That is what I now have a huge poster of.  Squeee!!!

Clearly you can see how my dork side has blossomed and emerged.  All because of Scott.  Now we can be dorky together.  And hopefully bust out a new game this week!