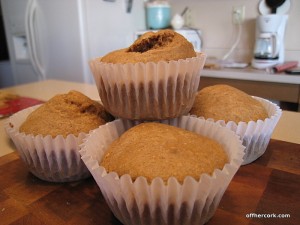 Last month for Scott’s birthday we discussed what sort of special dessert/snacky thing he wanted.  A lot of ideas were tossed around and he finally decided on Cinnamon Vanilla Cupcakes.

Those were his exact words.

Dude.  I don’t even know where he pulled that from! But in this house, whatever my hunny wants is what he’s going to get.

I poured over some websites and several of my favorite cookbooks and came up with a game plan.

This is how I work. I review several recipes to get an idea of how something is done and then I make my own version.

I fully expect that everyone else operates this way as well.  In my head no one follows a recipe exactly, we are all just a bunch of Kitchen Rogues blazing a path with a chef’s knife in one hand and a kitchen blow torch in the other.

Preheat oven to 350.  In a large mixing bowl, add all dry ingredients and whisk together until everything is combined and “fluffy” looking.  In a smaller mixing bowl, combine soymilk, vanilla extract, and olive oil.  Mix and then slowly add that to the flour mixture.  Gently stir the ingredients together.

Line muffin tins with cupcake liners.  Fill with cupcake batter about halfway full.  Bake for about 7-10 minutes or until a toothpick inserted comes out clean.  Remove from oven and allow to cool 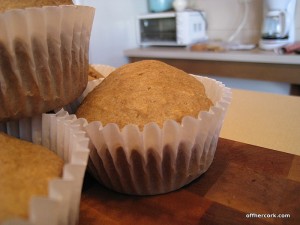 These were my first attempt at vegan cupcake making (remember I prefer to bake vegan).  I’ve been making cookies and such for a while now so I figured it was time to branch out.  Good suggestion Scott!

Aside from the fact that these stuck to the liners a bit more than I would have liked, they came out totally awesome.  Due to the WW flour they are slightly denser than a regular cupcake but that’s okay because we like that taste.

We ate them unfrosted but you could totally top them with a chocolate ganche of some sort.  I’m still working on making a great vegan icing that doesn’t include a ton of powdered sugar and fake shortening (ew).