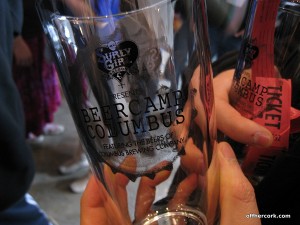 I realize that picture might be hard to see and I apologize for that.  Beercamp was packed! And it was hard for me to get pictures that weren’t blurry.  But I tried!

Last weekend was Columbus’s first ever Beercamp!  Whooo!  I had heard some mutterings about it on Twitter and was following the conversation along while in the back of my mind thinking it might be a fun thing to attend.

When I realized that I would be able to meet some new people and drink beers at the same time, well why wouldn’t I go?  I bought tickets for Scott and I to head to Beercamp!

Beercamp was held at WildGoose Creative and featured beers from Columbus Brewing Company, a local brewery.

When you walked in, you were given a Beercamp Pint Glass and also 8 tasting tickets, each ticket worth 4oz of beer.  If you’re counting, that’s a total of 32oz of beer. 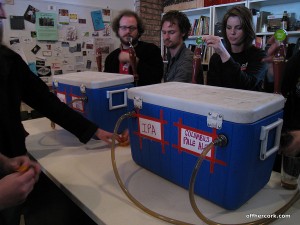 Columbus Brewing had four beers there to sample:

I’m not a huge light colored beer fan but I decided to try the Saison and see what that was like.  Scott started off with the Scottish Ale.

It’s pretty safe to say that me and the Saison did not become fast friends.  I actually couldn’t finish it at all and had to toss it.  Sorry CBC!  I did test out Scott’s Scottish Ale and that was a winner!  So I got that for my next glass.

Beercamp was jam packed making it a little hard to move around to see things, talk to people, and to make your way to the bathroom.  This is why I don’t have many pictures because it was a little difficult for me to take some that weren’t super blurry.

We got to sample the food that was entered in the competition and there was some really great stuffed served up!  Sadly all the desserts won out.  I say sadly because I think the food should have been split into categories.  Mac ‘N Cheese shouldn’t really have to compete with chocolate cupcakes, ya know?  I didn’t try any of those since dessert isn’t really my bag.  I tasted some of the other stuff which was very creative and yummy and if you were to ask me, they should have gotten some attention as well.

For a first time event, Beercamp went well with a few bumps along the way that all first time events face.  I got to meet a lot of new people who I hope I impressed with my mad social skillz and we can hang out again soon.

The one bummer for me was not being able to try any of the home brews that were up for competition.  When I think Beercamp, that is exactly what comes to mind, home brewing.  What it is, how you can do it, and what all is involved.  Talking to folks who do it and talking to local breweries about their beers and the process of making them.  What inspires them to come up with the styles and flavors that they do.  Then finally to sample some of the results.  Scott and I both are really starting to enjoy craft beers and love finding locally brewed stuff.  Being able to sample what some of the more experienced home brewers are doing would have been an amazing treat!

It was day where beer lovers could hang out and bond over some brews, which is always a great thing!  Here’s to next year!  And if you need volunteers, Beercamp, I might know some people who would love to toss around some ideas and lend a hand.