So Scott and I don’t celebrate Valentine’s Day.  We think it’s ridiculous.  You’ve got women demanding gifts of whatever nature and if they don’t get something then, “OMG YOU DON’T LOVE ME!” and guys will buy the gifts just so they won’t get in trouble. It’s slightly effed up behavior and if you happen to be working retail during that time it’s also a little disturbing to watch.

Don’t worry, I’ll spare you my huge anti-Valentine’s Day rant.  Just know I can’t stand it.  Neither can Scott so that makes us a perfect match.  What we both do love is zombies.  Yes that’s right, zombies.

We were having dinner (or maybe lunch?) one day and started discussing our loathing of Valentines.  It had been all over the Twitters lately and I don’t mind telling you it was driving me a bit bonkers.  We pondered if it was possible to make the day into something else?  Something more fun.  Something worth celebrating.

Me: Wouldn’t it be hilarious if we celebrated zombies instead?

Scott: Zombies should always be celebrated and recognized for their sheer zombie gloriousness.

Me: How did we not realize this before!

And thus, we have started Zombie Appreciation Day in our house.  Forget Valentine’s Day with overpriced flowers and overpriced cheap-ass candy.  Forget the ridiculous demands your chick (or possibly dude) is throwing at you as a reason for a new piece of whatever that they don’t need and will only wear/use on the 28th day every other month if you’re lucky. Forget all about that stuff.

Instead I challenge and invite you to embrace the Zombie.

Zombies are all over the place so this can be done any way you choose!  The more creative the better!

There are plenty of movies to watch to get you into the Zombie mood.  How about a little Dawn of the Dead action for classic zombie lovers? Or some Planet Terror goodness?  Want funny, there’s always Shaun of the Dead to turn to. Zombieland also just came out on DVD.

There are video games too!  A favorite at OHC being Resident Evil. There’s Left 4 Dead I and II if you’re into plain running and gunning.

Not into video games? Oh there are zombie board games! That’s just one example but if you do an Amazon search, loads pop up.  The game that I linked to we actually own and it’s a fun game to play.  The rules take some getting used to but once you have it down, it makes for a good time.  And it takes a while to play so you might as well pour yourself a nice drink to enjoy while playing!

For Christmas last year, I purchased Zombie mints for Scott as a stocking stuffer.  He said they tasted like meat flavored mint.  Ew. And yet intriguing.  I have not braved them though.

You could celebrate a whole day of Zombies! Starting off with some gaming and then followed by movies later in the evening.  Or vice versa!  You could make zombie or brain shaped cookies with crazy icing designs.  Oatmeal becomes a whole other avenue of adventure when looking at it as a bowl of possible zombie food.

Perhaps you like looking at zombies?  And just maybe you enjoy other people’s seriously creative ability.  If that’s the case, then please check out the work of Terry Border at Bent Objects.  His stuff is amazing and he’s got a store where you can purchase prints!  Hooray! Bonus, he’s working on new zombie material! It’s like universe just knows it’s time to celebrate something a little more fun and exciting.

And while I realize that this isn’t technically a zombie (or is it?!), I still have to show you this.  Because I’m always a day late and a dollar short, I stumbled upon Skull-A-Day just recently.  If you like skulls (I do!) and again, enjoy creative works, then I urge you to check out the website.  It’s totally dedicated to skulls and art.  You can read about its history on the site.  I entered a contest on the site and won!  Go me! 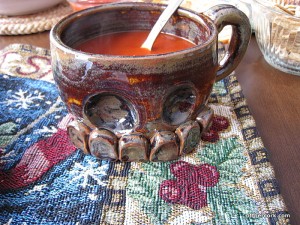 What I got was this gorgeous handmade skull mug.  Isn’t it cute?!  I love it!  It was created by Skeletal Dropkick, who also has a site where you can purchase his works.  Here is my new skull mug in all it’s glory serving me up some soup.  In a skull.  Soup in a skull.  Totally awesome.  It also reminds me of Ratchet and Clank so I <3 it even more.

And maybe, just maybe you like reading about zombies.  Well lucky for you that Amazon is loaded down with zombie books and graphic novels. Take your pic!

Speaking of zombie stories, did you know that Scott is a published writer?  Yup. And his story just happens to be about, you guessed it, zombies. He rocks.

So forget stinkin’ Valentine’s Day with its sickly sappy movies and over-priced dinners out. Instead stay home and snuggle up with the undead. They are loads more exciting!