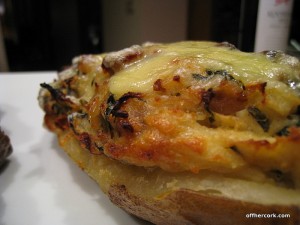 Would you believe me if I told you that I’ve never been to a steak house before?  Like an honest-to-goodness steak house?  I’ve been to Ruth’s Chris once with Scott like a decade ago but that’s a chain so I don’t really count that as a true steak house.

But there are some things I know about steak houses like they are crazy expensive if what people tell me is true.  Every time The Double R mentions steak houses on her show she says that for two people it could be like a $200 tab.

That’s a lot of money to be spending on a slice of cow from a factory farm and a baked potato.

I also know that when people mention steak houses they also mention creamed spinach as a traditional side along with a baked potato.   I decided to take the spinach and potato as sides idea and run with it.

This is the side dish that I made to go with our bison steaks we had for Scott’s birthday meal.  Steakhouse style twice baked pototes.  Or at least I’m assuming since we’ve already discussed how I’ve never been to a steak house before.

Bake the Idaho potato till it is done and soft in the middle. You can do this however you bake potatoes (please say not via microwave).  Cut the potato in half and allow to cool.

In a skillet, heat olive oil (about 1/2TBSP) over medium heat.  Add in shallot and start to sautee.  When the shallot starts getting a bit soft then add in the salt, pepper, red pepper flakes, and grated garlic.  Combine and sautee for about another minute watching the garlic to make sure it doesn’t burn.  Add in the spinach and artichokes, sautee until the spinach is wilted.  Remove from heat and allow to cool.

Scoop out the inside of each half of the potato and add to a medium sized mixing bowl.  Make sure to not scoop out the entire inside but leave about a quarter inch or so border so that the potato will hold together.  Mash the insides of the potato in the mixing bowl till it’s smooth.  Add in the yogurt and the spinach and artichoke mixture.  Stir till combined then add in the 1/3C of grated swiss cheese.

Scoop mixture back into the potato halves, distribute equally between each half.  The potatoes will be stuffed and over-flowing, this is what you want.

At this point you can heat them up and serve or cover and refrigerate until you’re ready for them.

Right before pulling them out of the oven upon reheating, sprinkle with remaining swiss cheese allowing it to melt.  Serve immediately and enjoy! 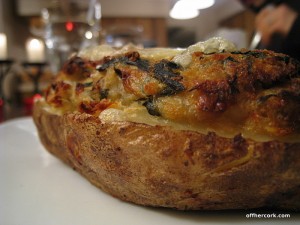 The method I use for baking my potatoes is high heat and foil wrapped.  I wash and then pierce the potatoes with knife.  I rub it down with olive oil and season the outside.  I wrap it in foil and bake at 400 till they are done which is usually around 45 minutes or so.  It does take some time but it’s totally worth it.  I grew up on microwaved baked potatoes because the microwave was New! and Exciting! when I was young so my mom loved the idea that in 5-7 minutes you could have a baked potato.  Microwaved baked potatoes do not taste the same as oven baked potatoes.  Oven rules and microwaves drool.  Or something.

These potatoes turned out awesome!  Great flavor coming from the shallot and garlic with a slight tang from the yogurt.  You could use plain yogurt if you don’t have Greek yogurt.  I think parm would work well here too.  Scott happens to love Kerrygold Swiss cheese and since I had some on hand, that’s what I used.

Twice baked potatoes are great for entertaining as well because you can make them ahead of time and just heat them up when guests arrive.  If you are reheating them, preheat the oven to about 400 and line a cookie sheet with foil.  Spray sheet with nonstick spray and place potatoes on top.  Cover potatoes with more foil and cook for about 20 minutes or so until they are heated through.  Remove foil and sprinkle with remaining cheese.  Done!

The next time you have a fancy-pants dinner at home, give twice baked potatoes a try!

Have fun guys and remember, always play with your food! Enjoy!