For Scott’s birthday week last week, he took Friday off and we headed out to breakfast.  Going out to breakfast is one of our very favorite things to do.  I like dinner but if I had to only do one, I think it would be breakfast.

I love walking into a restaurant and smelling the coffee, eggs, English Muffins, and pastries.  I love that it’s a little bit quieter and subdued.  I like seeing people read their papers or fiddle with files over a steaming cup of coffee and a plate full of goodness. 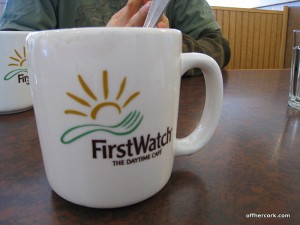 When Scott and I first moved to Ohio, we came across a place called First Watch.  We knew it was a restaurant but we weren’t sure what type so we looked it up online.  It said that it was a breakfast and brunch place only and closed at 2pm.  Interesting!  Because before our only encounter with breakfast places were places that happened to serve breakfast all day long.  Think Bob Evans or, shout out to my ‘Burgh peeps, Eat’n Park.

Scott and I had never been to a place that only served breakfast type items and was only open till early afternoon.  This intrigued us!

It was a while before we got a chance to try out First Watch and now it holds a special place in our hearts.

Did you know that Scott and I eloped?

It’s true, big weddings and all the wedding hoopla is not our style.  Low key with just us, an officiant, and some nature is more our thing.  It was early morning in July when we tied the knot.  As we were leaving the park where we got hitched, we realized that it was still early enough that we could go and get breakfast.

We went to First Watch and had our first meal together as a married couple.  I have no idea what Scott ordered but I sure as heck remember my meal!  It was a croissant with scrambled eggs, spinach, and cheese on top.  It was as good as it sounds.

We have been in love with First Watch ever since and it’s one of the few chain restaurants that I will gladly walk into.

So when Scott had that random Friday off, we knew where to go for breakfast. 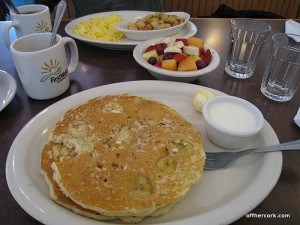 Normally I get some eggs, turkey sausage, and an English Muffin for my breakfast.  This time I was craving pancakes like you can’t even imagine.  I love that at First Watch you can order 1,2, or 3 pancakes.  I also love that they have a huge variety of different ones to pick from.

One of the reasons I shy away from pancakes out is because of the ingredients.  White flour, milk and eggs probably, and white sugar.

But this time, I didn’t give a flip.  Why?  Because how often do I eat breakfast out and get pancakes?  Not often.  Plus I was really really really wanting some pancakes and having something else would not have satisfied me.  Is it worth it to be disappointed in a meal you’re paying for, just so you can say you didn’t eat something because of XYZ?  I’m going with no.

Sometimes you just have to get what you really want.

I had banana granola pancakes and I got some yogurt on the side to dip the pancakes into.  The banana slices and granola were cooked into the pancakes, not just tossed on top.  These were the most amazing things I ever had.  Light and fluffy with the perfect sweetness and vanilla flavor.  I could not stop telling Scott how much in love with these pancakes I was.

I ordered two but only ate one with a few bites of the second.  One would have been plenty, as they were pretty big and substantial for me.

I was happy and content.  The pancake and getting to spend time with my hunnies at one of our favorite places made for the best day.

16 thoughts on “Breakfast Out”