Warning: Due to high content levels of PMS found at the HQ, this post contains beer, chocolate, and cheese along with trace amounts of debauchery.  Proceed at your own risk.

Disclaimer: OHC and its staff are not responsible for any side effects you may experience being exposed to this post. Thank you for your cooperation.

Hey gang!  Listen I totally punked out on my run Wednesday morning.  It was cold but the wind was killer.  I can deal with cold but wind gets to me really quickly and fast.  Running in the cold wind sucks no matter which way you look at it.   Running in it for days drains the soul. I’m for serious.   I only made it for 2.5 miles before I came home.  It got to me and I could not run any longer.  I almost didn’t even go because I could hear the wind but decided that I would just do what I could handle.  Something is better than nothing at all.   Then I shoveled the walk and the driveway so I am calling it good!  The cals I burned combined are equal to a 4 mile run so this is A WIN.

I woke up Lovah and made some breakfast and then my day just went flying by and I have no idea where the time went, which is why there was no post yesterday.  Other than the Yaktrax post of course!

Most of my time quite frankly was spent in the kitchen prepping and cleaning.  I have been wanting to make veggie chili for ages and never got around to it.  I have been seeing a lot of folks digging into the cocoa chili from Eat, Drink, and Be Vegan which intrigued me.  I pulled the cookbook out to take a look at it.  I was down with cocoa but not down with coconut.  I was not feeling those particular nuts yesterday.  What could I do with cocoa though?  Hrm.  I stole the cocoa part but made up an entirely different recipe.

And also I have been wanting some beer bread like Tiger Woods wants diversity in his blondes (too soon?) and decided to get cracking on that too.  I made it with a few twists this time around.  I added in some pepperjack cheese instead of cheddar, used a darker beer, and added in a bit more spice.  It smelled like how one would like to think a pub from old timey times would smell.  It did not smell like how an old timey pub actually would have smelled (phew!).

The thing about my husband is that he’s forgetful about things.  He really can’t remember shit and that’s the truth.  I’m not bashing him (I am not down with people who bash their significant others), I am stating fact.  And providing this tidbit for some backstory.  Occasionally I will ask him to guess what something is that I made because I know he can remember.  I swear he can do it!  This is also my way of making sure his brain stays active so that when we really are 85, he can refer to me by name and not just, “that woman I married.”

When I ask him to guess it is only for things that we have already had before.  I don’t whip up a new concoction and ask him to name it.  Totally unfair.  I have rules.

However my husband who never remembers anything, will try his best to guess.  He will put random words together hoping with all hope that they sound right.

Andrea: Well that too, but look what I’m about to pull out of the oven. 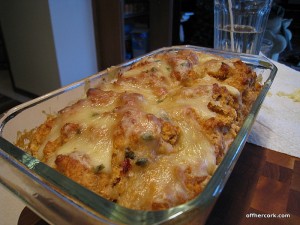 Andrea: Ta-da!  Do you know what that is?

Andrea: Seriously? Mexican Taco Bread is what you’re tossing out there?

Andrea: Didn’t you see me sipping a beer earlier? (to make sure it wasn’t skunky! Shut it.)

For reals peeps, I am not clever enough to make this kind of stuff up.

Dinner was a veggie chili loaded down with all kinds of stuff and the recipe will be forthcoming because I must share.  I will tell you that it had pumpkin and cocoa in it.  I know, killer!  Check it out. 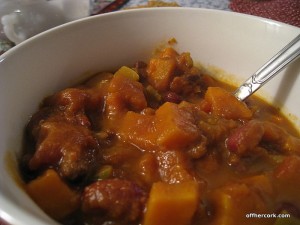 Paired with some beer bread and life was pretty fantastic at that moment. 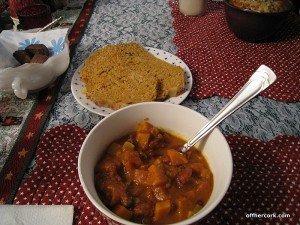 We kicked it at stick fighting and then I promptly came home and went to bed.  I read for a bit, starting a new book in the No. 1 Ladies’ Detective Agency series.  Anyone else read that series?  It’s fun and light and an easy read.  I got a little munchy and Scott brought me up some prunes that I ate in bed like a proper senior.  He hadn’t liked prunes before and gave them another try last night.  He said he liked it!  Hooray!  I’ll get that brain to stay active if it’s the last thing I do damnit.

So Columbus is all a flutter because ohmygods we are about to get snow!  And like it might be 6 inches at most.  While that is a good amount, let’s keep it real, 6 inches is nothing.  I woke up this morning and it was not snowing nor had it snowed.  My goal was to crank out a decent run before the blizzard of ’10 started to rear its head.

Things going my way this morning:

1. There was no wind except for a very slight breeze.

2. It was 20 degrees for my run which compared to recent temps, is basically bathing suit weather.  HOORAY!

I cranked out 7 miles this morning all before the death storm 10.  HELL YES.  I thought for sure this week would be a very low mileage week due to temps but 7 miles I will take.  I was looking forward to a high mile run today and was glad to be able to achieve that.  We normally have conditioning class tonight but I wanted to take measures just in case that didn’t happen due to weather.  As in, we shouldn’t leave the house because some jokers can’t drive in snow.  Not us (naturally) but I’m not a trusting soul and people tend to flip out a bit for a touch of snow.  7 miles I am calling another WIN for sure.

Smoothie was a little different at lunch today so let’s talk about it: 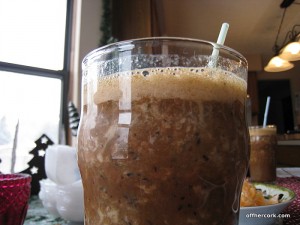 Beautiful!  I accidentally bought some fat free French vanilla Stoneyfield the other day.  Someone put it back in the wrong place and instead of low fat I got no fat.

I cannot stand fat free yogurt.  I can tolerate some vanilla oikios but that’s it.  Everything else is yucky and that includes this Stoneyfield stuff.  Well I’m certainly not going to throw away a huge container of yogurt, that’s ridiculous.  I decided to freeze it in ice cube trays.  Exactly how I do for snacks for Rocky.  This way I could give them to Rocks or I could toss them in smoothies.

I am a genius.

This smoothie was kickass.  Totally creamy like a shake and perfectly filling.

I took Rock of Love out for his walk.  He had to suit up because eventually the storm hit and at the time I walked him, we had about 5 inches of snow.  He loved it and was prancing around in the snow.  He got commented twice on his jacket and booties.  He knows he’s money so I don’t know why he’s got to go through the dramatics about the matching set in the house.  He is not even a teenager but a senior so shouldn’t he be past the angsty stage already?

We did not make it to conditioning class which I was totally okay with because all I wanted to do was get in some new jammies, start pizza, and drink wine.  Not necessarily in that order but that’s actually how it turned out.  Thursdays are new jammie days for me.  I wear the same jammies all week like an animal.  Whatever, I’m clean so why waste clothes?  Exactly.  Since I clean the house on Thursday, everything gets changed up, sheets, towels, and jammies.  You get the idea. 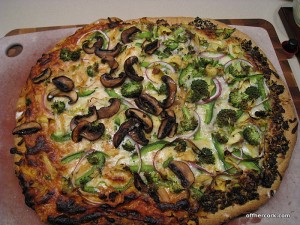 Second time using the pizza stone and it is fantastic!  Definitely the best crust, crispy and chewy.

Alright gang, there is some red wine and chocolate calling my name-o, so I’m out.  Till tomorrow!