Hi gang! Oh man I don’t think I could be even more blah today.  It’s one of those days where I’m constantly behind and running to catch up.  First last night we watched an old movie and had a snack. 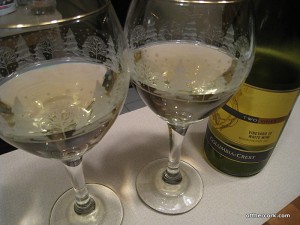 Some white wine and nutrolls!  YUM! We watched, After The Thin Man and if you like old movies that are “who done it” type you definitely should give the Thin Man series a look.  The movies are hilarious!  The storyline is interesting, the dialogue is fantastic, and the interaction between the two main characters is great!  Of course with old movies one does have to deal with certain actions and behaviors towards women.  Meh.  It’s a good lesson in how far we’ve come as a society and how far we still have to go.

I went to bed way too late and had too much wine.  Bah!  For the record I don’t get buzzed or drunk (nor does Scott) because for us that’s not the purpose of a nice drink.  I think sometimes people assume that if one is drinking they are only doing it to get drunk which is a limited and sad perspective to have.  Wine and beer to me are like great desserts, something to treat yourself with and to savor!  But I have my limits and too much wine means I sleep like crap and get too hot in bed.  Both of which happened last night, combined with being overly tired and that added up to a really crap sleep.

I was still going to run this morning regardless but it was pouring rain again and windy outside.  Blech.  I was gross feeling anyway coming off of too little sleep.  I hate that feeling which is the reason I’m so behind today.  I just can’t get motivated to do anything and then by the time I start it’s late.

I did walk Rocky when there was a break in the weather and wow it was great to get outside!  It might have been cold and windy but the fresh air was a nice change after being cooped up all day yesterday! 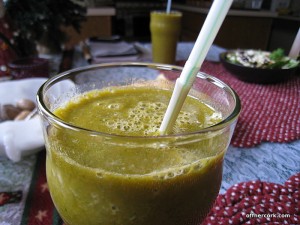 Today’s lunch smoothie was Exorcist green but don’t let that scare you, it was really tasty!

Dinner was pretty easy today since it involved leftovers.  Scott had leftover pulled pork and I had leftover soup from Saturday. 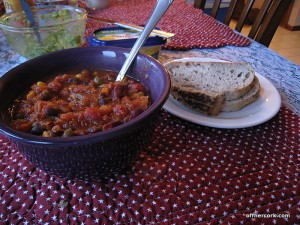 The soup was perfect for today because the weather was crappy.  But then I got jealous of Scott’s tacos (there’s a joke in there somewhere) because I wanted one too!  But I didn’t want pork two days in a row (can’t do meat two days in a row) so what to do? 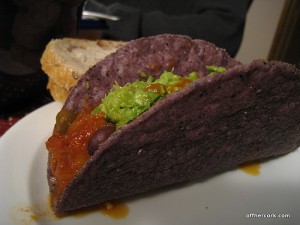 I passed on the bread and put some of my soup into a taco, topped with guac and hotsauce.  YUM!  Then I used the broken leftover taco pieces and dipped them in my soup.  Perfect solution!

I hate to label it that way but since the topic is periods, I doubt the dudes are interested. :p  Did any of you read the Breathe Article by Kath discussing the topic of embracing the cycle?  For a short article it was pretty interesting and came at a time when I was just dealing with that situation.

Since I’m currently in maintenance mode, I don’t really weigh myself as much as I used to.  I do it now strictly just for maintenance to make sure I’m still on track.  I go mostly by how I feel and since I’m feeling great and my clothes fit beautifully, I’m pretty happy.  I did weigh myself recently though and noticed an increase of three pounds.  I didn’t freak out, I just assumed that my new love for feta in my salads caught up with me.  No biggie, reduce the feta, up veggies and fruit and the three pounds would be history.  I didn’t really think much of it.  Then the following week I weighed myself and the three pounds were gone.  Well that was fast so I knew something had to be up.

Then things finally clicked I realized that this was period weight.  Since my eating has become very clean, I haven’t really had to deal with period bloating and weight gain for a long time.  I still get hormone cranky and craving chocolate but that’s about it.  Anytime I feel bloaty it’s because my eating has been off or I haven’t taken in enough water.  By “off” I mean eating processed foods (an Amy’s burrito for lunch with no veggies makes me bloaty and feeling gross) or if I don’t get enough fruits and veggies that day.  What’s interesting is that I didn’t feel bloated or any different at all really.  Nor did my clothes fit any differently.

It does make me wonder if this turn of events is diet related.  Since it has not been an issue for over a year now, perhaps my new love for feta did catch up with me! :p  I’m actually curious to see if this is a trend that is going to start up again and continue.  Next month I’m going to have to check again and see if there is some weight gain.  If so, I am going to maybe look at what I’m taking in a little more closely to see if I can determine what’s going on.  Not that I’m worried about period weight but I am curious to try and understand why it’s an issue again after being dormant for over a year.  If it’s here to stay, so be it!

Do you have to deal with the monthly water weight or is it a non-issue?