Hi gang!  Listen yesterday was just Le Crazah with me cranking out stuff here at home which lead to no post.  I know you all understand which is why I don’t even stress about it but I do still feel the need to explain myself so perhaps I still stress a bit? I also apologize for that terrible run on sentence but whatever I was not an English/Journalism major, I was Crim-Psych and we didn’t care about no stinkin’ sentence structure.  Unless we were turning in paper and even then whatever.

Random fact that will blow your mind(although my other fellow grannies will yell HOLLA): Back in the day when I was in college, most people didn’t even have computers.  Yup. Had to type a paper?  Computer lab baby, computer lab.  I had my own but no printer so I still had to kick in the lab to print out my shiz.  And I got to carry around those sexah discs.  USB what? Not.  Typing papers in high school was nonexistent.  You had to hand write those puppies and depending on your style of writing a 10 page paper could be easy or difficult.  You pick!

We also didn’t have cell phones in college. No one did, hell we were still getting used to those new fangled cordless phones with the extending antenna! The kind that you would bang against the wall until you got used to the fact it extended 2 feet away from the handset.  Yes those!   Had to call someone long distance?  Calling cards.  If you had one that was 10cents a minute you were golden because most of them were 25cents a minute.  Scott had a 10cent one, that rate kicked in after 7pm (restrictions FTW!) which was handy since we went to different colleges 7 hours apart.  He also had more money than I did in college so I didn’t mind him being the one making the call in the evening. True story.  He also has more money than I do now so at least we are consistent!

I had a 5 mile run yesterday and then came back and did some of Gina’s workout.  I mixed and matched, some from the beginners and some from the intermediate.  I also don’t have a medicine ball yet so I used my handweights for some things which totally worked out.  I have to say that I felt awesome after my workout! I love running and feel good afterwards, but yesterday running combined with the weights, I got the high.  I love the high!  Normally I only get that if I do speed drills and quick fast runs.  I do not get the runners high from distance alone.  Yesterday running plus weights gave me a workout high and it was fantastic!  For sure I need to do this more often.

Anyway yesterday was same old same old except I was kicking it Donna Reed style most of the day.  Lunch was the usual with an addition: 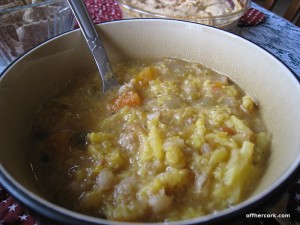 A little bit of Amy’s veggie barely soup on the side.  I bumped up the veg by mixing in the leftover mashed cauliflower from Sunday.  I am a rockstar!  It totally worked, now had I actually liked this Amy’s soup I probably would have been a bit more happy.  Sometimes Amy’s soups seem to have a very weird onion taste going on.  Since I love onions, for me to say “weird onion” you know something totally funky must be happening.  I think I’m going to stick with the tomato and lentil versions of her soup. 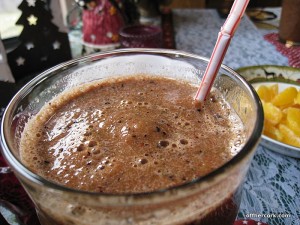 After lunch, I cleaned up the kitchen and then cranked out some pizza dough.  Then I pulled out a new prezzie to use: 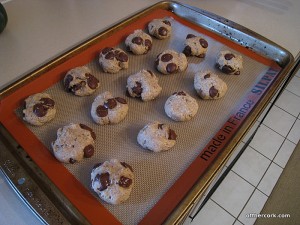 Silpats!  Well, silpat, I got one for Christmas.

Riddle me this, instructions on the silpat say to store it flat yet it is sold and packaged all rolled up.

Drive on the parkway, park in the driveway kind of stuff going on right there.

I made some almost vegan chocolate chip cookies. My chocolate chips are not vegan, so you know, that’s the almost part.  I LOVE THEM with all my itty bitty heart.  The cookies.  The silpat is nice too and worked divinely. 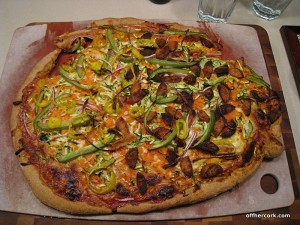 Confused?  Well here’s the thing, Thursday (today) we are going to dinner and a show with friends so there really wouldn’t be time for pizza.  And we must have the pizza!  Normally I would have just bumped it to Friday but we might be going out to dinner Friday (it’s restaurant week here) so you see my dilemma.

Scott had to work late yesterday and since we weren’t able to hit stick fighting class I make the executive decision to move pizza day to Wednesday. 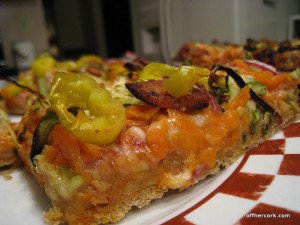 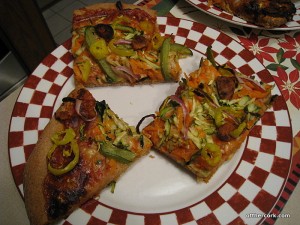 I had three pieces while we watched some hockey.  Let’s not discuss that.   Then it was time for my snacky! 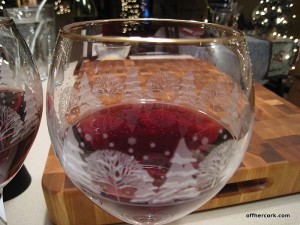 Some red wine and cookies!   I had two cookies, mmm!  They were a little bit poofy but overall very good and if you want the recipe I’ll post it!

I woke up at 7am this morning and heard the wind.  I flip-flopped back and forth about whether to run today or do a rest day.  Rocky was sleeping in all peaceful which he never does so I went with it and just laid in bed for a while.  I should have gotten up but whatever it’s over now, no sense on dwelling on it.

I was going to run and do strength until I took Rocky out for his potty run which is when I got slammed with the wind.  Cold wind sucks to run in, plain and simple.  I hate it.  I didn’t want a rest day though.  I really enjoy having rest days on Fridays so what to do?

Duh.  Sometimes it takes me a sec.

I did 2 levels of shred and then some extra stuff on my own from Gina’s workout and some additional stuff I added in for hamstrings.

Lie on your back on the floor.  Both feet placed on top of the stability ball and lift your hips/pelvis off the floor and hold for two seconds.  Drop back down, rinse repeat.  You will feel it burning instantly!  You can do this on a chair or bench too.  The stability ball just gives you an extra level because you have to keep it stable as well as lift your hips.

I was spent after an hour of hardcore kicking it! And I felt awesome and was totally pleased with myself for working out. 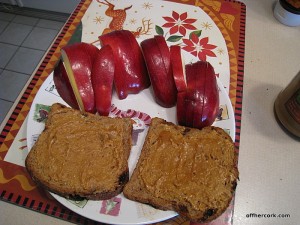 It was late in the morning and I didn’t want something super heavy.  Oatmeal and oatbran would have been too much.  I really wanted a mess but we are out of yogurt (grumble).  I decided on two slices of cinnamon raisin Ezek with PB and honey, along with a huge red delicious.

Yummy?  Yes.  Filling?  NO!  My body was like, “Oh hey, breakfast appetizer, we can dig it.  Where’s the real food now?”  I was so hungry still!  I’m not proud of what I did next but well, when I’m hungry it’s best if you just yield and get out of the way.

Listen!  He was eating so slow and he only had two pieces of toast.  He didn’t even have the fruit part!  He said he was full and wasn’t going to finish his breakfast anyway, so I took his remaining half of toast.

This quieted my bellah but in no way filled me up.

When lunch time rolled around I was more than ready!  Knowing that I did a good bit of strength stuff today, I took Gina’s advice and bumped up the protein a bit in lunch today. 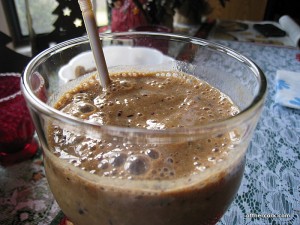 Thick and lovely! Like a milkshake!  I had a chick’n patty on the side: 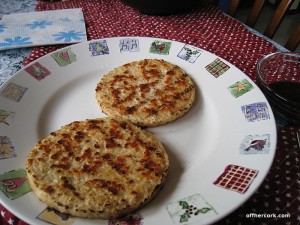 With some BBQ sauce for dipping.  Standard salad too but no fruit because we are out of fresh fruit.  Other than an apple and I already had that today.  Scott again got full before clearing lunch so I finished the last two bites of his chick’n patty.  Then I had two huge prunes because I was still hungry.

If I ever again think I can get away with eating some toast for breakfast smack me.  Or spank me, whichever.

I’m out pretties!  We are headed out to dinner and a show tonight with friends so recap will be up tomorrow.  Wooo!  Have a great one!