Hi gang and a big huge welcome to 2010!  Which I keep wanting to type as 2110 for some reason. I would hate to think what my state of being would be like if I were to make it to such a date!

Thursday evening we had some bubbly and snacks. 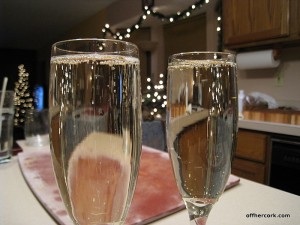 Mmmm chocolate cookies!  We watched a bit of Twilight Zone and I just barely made it to midnight.  I quickly kissed my boys and headed to bed time where I immediately crashed out.

Friday, the first day of a brand new year and this is what I was greeted with. 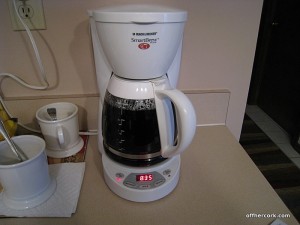 Now I realize that this doesn’t look odd.  It’s a coffee pot, big deal.  Well the thing is, that’s not my coffee pot.  In fact I have no idea who’s coffee pot that is or where it came from. 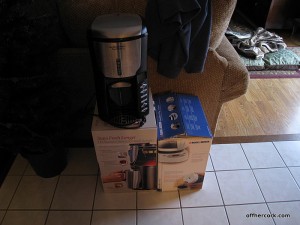 The one sitting on the floor?  That’s my coffee pot.

Like whoa!  Apparently some shenanigans happened after I went to bed.  I just went about my business prepping dinner and then poured myself a nice mug of coffee.  I had plans of possibly a light run or maybe some shred but my body said, “Hey, let’s not.”  And so I didn’t.  Rest days, we all need ’em.  I had a wee bowl of yogurt + granola, and a bite of gingerbread bagel.  When I say bite, I mean that literally.

I basically lounged around being a total bum and it was pretty amazing.  I did some laundry and then Kim told me it might be back luck.  Well I don’t need any stinkin’ bad luck so I immediately ceased all laundry.  Thank goodness I found that out early on!

Eventually Scott got up and I made us some breakfast. 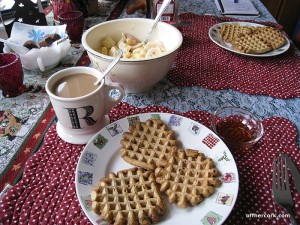 We had gingerbread waffles and a huge fruit and yogurt mess.  The fruit was:

The rest of the day was spent gaming our hearts out.  I found out that the impostor coffeepot was ours pulled from the 7th circle of hell, the depths of our basement.  Apparently it was me who broke the original coffeepot.

See, it was pouring very very slowly.  So slow that sometimes we had to tip the coffeepot forward in order for it to pour faster.  When I cleaned the pot out on Thursday, I guess I scrubbed and scoured a little too hard.  It stopped holding liquid altogether.  It pees its pants basically.  Hence Impostor Pot.  Now we are shopping for a new pot.  Impostor is nice but he doesn’t need to live here.

Soon dinner called to us and we fell for its siren song like punks. 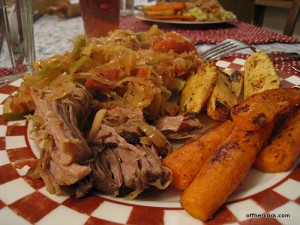 Pork and sauerkraut, mashed potatoes, and roasted carrots and parsnips.

The pork was a butt roast that I cooked in the crockpot along with the kraut.  There were also some tomatoes, onions, and green peppers in there as well.

I loaded up my plate mostly with sauerkraut because I love it oh so much.

I ended up not eating much mashed potatoes because I just wasn’t feeling that.  Veggies, kraut, and pork were awesome!

We watched a Pens game which was horrible and I snacked. 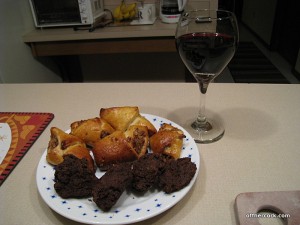 I sipped on some red wine and had some nutroll and chocolate cookies.  Clearly not that entire plateful, that was for both of us!  I hit the hay and decided to play Saturday by ear.

I got up at 8:30 this morning.  Total craziness!  I’ve been going to bed way too late in the evenings.  This after midnight business is killing me.  Ugh.

Muay Thai school opened back up today and I debated long and hard about going.  I miss hitting stuff!  But this weekend is the last two days of vacation and well, I want to get the most out of it that I can.  Plus Scott and I had a few things that needed done so we stayed home.

I should have run this morning or done some shred but I didn’t.  I did walk my dog and it was crazy cold outside.  OY! I had on two pairs of gloves which did not work.  My fingers were red, swollen, and numb when we got back home.  I seriously need to find me some good gloves! Where can I look friends?  Should I check out REI and see what hardcore campers and hikers wear?

Scott had leftovers for dinner this evening but I did not.  I needed some light, filling and loaded down with veggies. 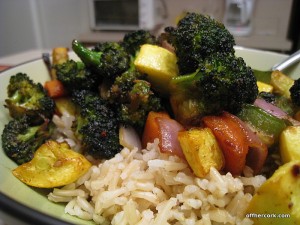 Roasted in the oven at 400 till tender.  They had:

And roasted for about 10 minutes or so.  The rice was brown jasmine rice.  Mmmmm! 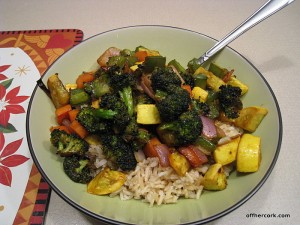 The plan for the rest of the night is to read in bed and perhaps a mug of tea.  I’m hoping it’s not going to be too terribly cold for my run tomorrow morning.  Temps are starting to get low low on this end!  Till tomorrow my pretties!

P.S. Tell me what you think of the new design!