Hi guys!  I could not get warm last night at all.  I hate that!  I made a mug of tea and headed to bed to get snug with my toasty bed warmer (I mean that literally, “bed warmer” is not a euphemism) but it took me ages to get warm.  I even had to sleep with my socks on for a bit.  Sexah!  And also, ew.

I’m still reading SK’s, Under the Dome.  It’s just okay so far.  Some of the characters are a little hard for me to read because they have personalities that I cannot stand.  The kind where you are able to relate because you know/knew/interacted with someone just like that?  Yeah.  Sometimes the actions and behaviors of the characters are a little hard to stomach.  Does that ever happen to you when you are reading a book?  Do you ever stop reading a book due to the sheer fact you absolutely hate the characters?

That’s happened to me only once.  Normally I can finish a book out no matter how much I hate it or the characters, although there I have been times where I’ve stopped just because I couldn’t get into the book.  However, Twilight, is the most craptastic piece of drivel I’ve ever read with horrible characters.  I was able to finish the first two books but could not read anymore of the series for fear my head would explode from all of the bad.

Under the Dome, I’m close to being about 200 pages in and while some of the characters (most of them) are dolts, I’m still able to push through alright. 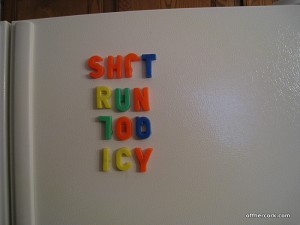 I got up this morning and headed out for what I was hoping would be a longish run. I wanted to crank out at least 6-7 miles this morning but that was not happening.  It was 31 degrees out which was warm but still below freezing.  It was also misting out which meant that everything was covered in a thin layer of ice, including the roads.  Because it was such a thin layer I couldn’t wear my YakTrax but it was enough ice to make things miserable and difficult.  I managed a 3.5 mile run and had to turn in and come home.  It was just too risky to do more and with cars slipping and sliding everywhere, I could not justify trying to do more miles.  I was really cranky about it too.

In the grand scheme of things, it’s not a big deal but you know how it goes when you want to run, run, and run but can’t for whatever reason.  Meh.

The upside is that being 31 degrees I only had to wear one pair of pants and a running hoodie, wooo!

Still had to wear my toboggan and gloves though, let’s not get crazy here.  I have a feeling that this warm weather isn’t going to last. February can tend to be a psycho-hosebeast sometimes and March is just plain old emo wanting attention for being “Spring!” but not getting it.

My HRM has been acting goofy lately, it bottoms out.  I don’t get the Flashing-Double-Zeros-Of-Death but in the middle of my run it will suddenly tell me that my HR is like 80.  Then in a little while it will jump back up to a normal reading.  Clearly this is not proper behavior and even though my endurance is up and my heart is stronger, I can in no way pull off an 80 HR in the middle of a run!   So what is the deal?  Is the signal getting lost some how?  Do I need to clean it better?  I love my little HRM so I need to know how to take care of it!

Breakfast was fun! And yummy, but I don’t have a picture for you because pictures would have looked neither fun or yummy.  I made some pumpkin chocolate oatbran!  And since I can’t take a picture of dark foods to save my soul, I spared you have to view my breakfast.  It was regular oatbran with about 1/2C pumpkin and 1TBSP unsweetened cocoa mixed in.  Delish! 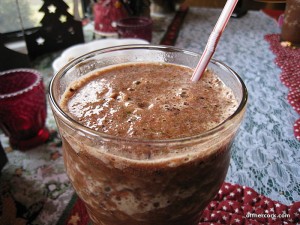 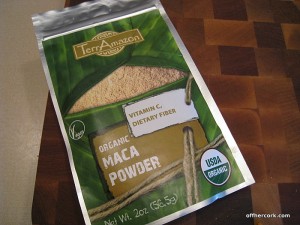 Oh yes we  sampled some of the famed Maca powder the Mayans loved.  This was given to me by the fabbo LG and I finally remembered to pull it out and try it!

Here is a slice of convo Scott and I had about it:

Scott: So I see you’re using the new stuff.  Maca.

Scott: So what does it do for us?

Me: Well, I don’t remember everything off the top of my head because it’s a lot, but I do know it’s supposed to increase libido.

Me: Feel anything yet?

I barely noticed it in the smoothie till I got to the end and then it was a little powdery chalky tasting.  I’m going to slowly add it to stuff here and there and see what happens.

Kicked it at MT and then came home to glorious food! 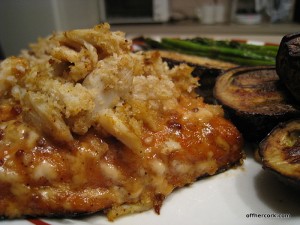 Salmon! With some crab topping!  The salmon marinade had:

I had some leftover crab from when I made risotto so I seasoned that with:

I kept it simple because I wanted to taste the crab and didn’t want it to compete with the salmon. 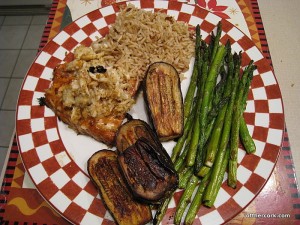 Roasted veggies on the side; asparagus and baby eggplants.  Super simple and easy!  Brown jasmine rice as well.  YUM!  The baby eggplants were very tasty and I could eat the skin because it was super tender.  Normally I pass on eggplant skin because I find it too chewy but this was excellent.

Alright pretties, I am wiped out.  I’m off to bed to read and then crash it!  Till tomorrow!