I wrote this yesterday but for some reason my photo program decided to crap out on me and was not working so it didn’t get posted.  I wanted to get this up so I didn’t change any of the verb tenses to past.  You’ll live through it, I know you will.

Friday evening Scott and I watched an old movie (Sherlock Holmes) and had some snackies! 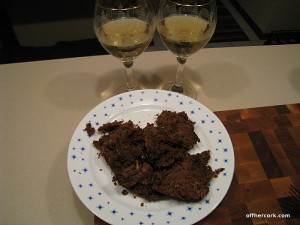 Wine (obv, it’s Friday) and some chocolate zucchini bread!  Wooo! It was so freaking good.  It’s extremely hard to take a picture of something chocolate and make it look edible.  You just have to trust me that this is some good stuff.

Saturday morning, aside from one sore spot on my back I was feeling 100% better than I felt Friday.  Goodness!  I really just needed that down day.  We hit up MT and then headed to North Market afterwards.  I was out of meat and needed to stock up.  We don’t eat meat a lot but I do like making us a nice Sunday supper using meat.  It’s like our meat day. :p  We also stopped at some of the food stations to pick up some things for lunch.  Disappointment train ahead! Have your tickets ready!

One of the worst things about ordering food from someplace is being disappointed in what you receive.  It’s so frustrating to me because I just spent some money on something I’m not totally satisfied with.  It sort of reinforces my desire to just eat at home because I will always get what I want how I want it.

Anyway, moving along.  I ordered some sushi, a veggie roll with avocado.  This is what I got. 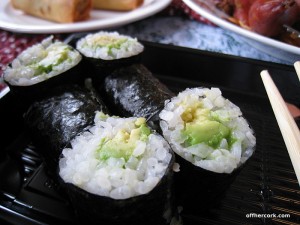 Some rice and avocado.  Um, where are the veggies?!  I paid over $5 for this?  Meh.  Scott asked me how it was and I said, “It tastes like avocado on some rice.”  I was so pissed. 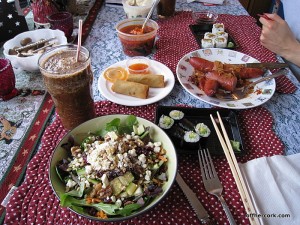 Veggie spring rolls also showed up, I had one.

The smoothie was awesome and since I made that, I’m going to go with, I’m not surprised.

YUM! We also stopped by the Polish station.

Kielbasa and kraut, mashed potatoes (for Scott), and another stew that I don’t recall it’s name.  The kielbasa was different and didn’t taste as well.  The kraut, part of Bigos, wasn’t very good.  And the mashed potatoes weren’t like last time.  I tasted them and it just was not tasty.  Wow I was so disappointed about this.  You know I look forward to eating the food of my people and this was not a very pleasurable experience.

I did have a salad on the side (I made) so that kind of made up for the ick factor of the other stuff.

The rest of the day, Scott and I just chilled out and gamed for a while.  Then I got started on dinner.

Did you know you can buy a nice container of crabmeat at Sam’s for a really great price?  Whole Foods sells the same container but smaller and more expensive.  Surprise?  I got some to have over the holidays and again we didn’t get a chance to eat it, which brings us to now.

I decided to use it and make some spicy crab risotto!  This was spawned totally from Twitter.  Lori and Kim were talking about pumpkin cheddar risotto with shrimp that Lori made and holy crap doesn’t that sound fantastically good?  So I started playing that around in my head and how I could go about making it.  Then I realized I had some crabmeat that we need to eat and well could I sub that in place of the shrimp?

And then I thought, well what else can I do with crab.  I originally was going to make a spicy crab chowder, could I transform that into a risotto dish using the same flavors?  Thus spicy crab risotto was born!

Welcome to my head.  Don’t be scared, it’s nice in here.

This made a ton of risotto and we have leftovers out the wahzoo! 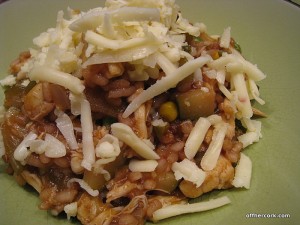 Topped with a bit of pepperjack cheese for extra spiciness.  We watched some hockey and then I headed to bed so I could get some decent rest before Sunday morning.

I got up this morning and was surprised at how dark it was still at a quarter after 7 this morning! Normally it’s just starting to get light and you know the sun is going to be out soon.  Not today, goodness!  Which can only mean one thing, it’s overcast.  I checked the weather and the forecast said a mix of rain and snow today.  Ew!  I busted my hiney and got it out the door to get my run in before the weather hit.

It was about halfway through mile 5 when it started raining.  I had to come in at 6miles because it was fully raining by then.  Bummer!  I’m going to try and make up the miles somewhere this coming week.

Even more of a bummer, when I got back home I realized I was out of yogurt so I wasn’t going to be able to have my fave Sunday post-run snack!  No granola and yogurt with chocolate chips for me today.  I may have shed a tear at this point.  So bummed! 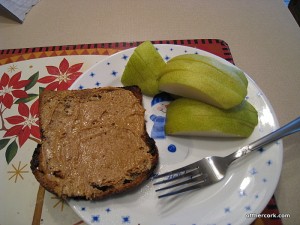 Sunday Breakfast!  I had trouble with this today actually! I wasn’t really sure what I wanted.  I wasn’t feeling anything specific.  I had no idea what to make.  I ended up making some eggs. 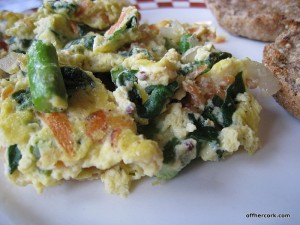 I sauteed the veggies up first for a few minutes, then added the eggs for scrambled eggs with a twist.  Ezek muffin on the side and a yogurt mess in the middle.

Since I didn’t have yogurt, I had to improvise and it came out smashing! 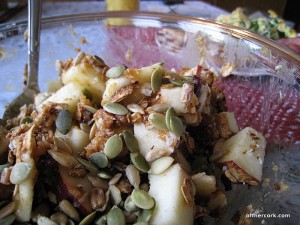 Sliced and chopped in a bowl.  I mixed about 2TBSP of PB with about a TBSP of maple syrup to help loosen up the PB and sweeten it a touch.  Added that to the fruit and stirred.  Then I added in granola plus pumpkin and sunflower seeds.  Amazing!  This was so good and totally filling. 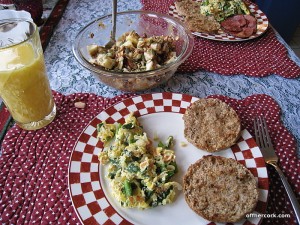 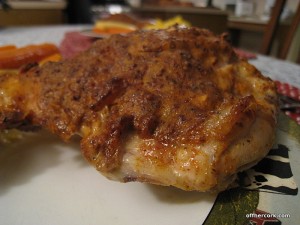 The chicken I did differently by adding a honey mustard glaze to it.  I seasoned the chicken up with:

And let it hang out for a bit before tossing it in the oven.  I brushed one layer of the glaze on and started it baking at 375.  The glaze contained:

When the chicken was halfway cooked, I added a second and final layer of the glaze.

This was rockin’!  Parsnip and carrots on the side for roasted veggies and also this: 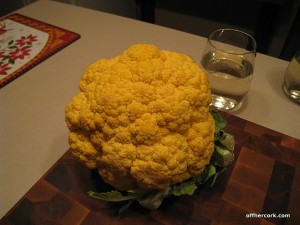 Hello orange cauliflower!  In the back is a wine spritzer, 1/4C white wine and a lot of seltzer.

I made mashed cauliflower with the orange love. 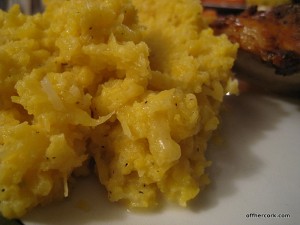 I cooked it in some water and chicken stock till it was cooked through.  Drained and mashed with a pinch of butter, salt, pepper, and soymilk.  Just like how I would make regular mashed potatoes. 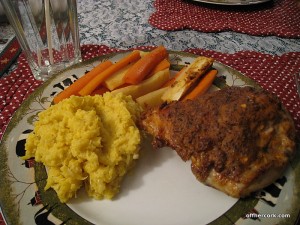 That’s a lot of food and in no way did I eat all of that.  I had maybe 1/2 the chicken, most of the mashed, and a good bit of the veggies but there was a good portion still left on my plate.  No clean plate member today!

Addition: We watched some TV after eating and kicked it on the couch.  I had a glass of red and some chocolate, which will show up in the next post as the pic is still on my camera.