Hi gang!  I had a snack last night after stick fighting class. 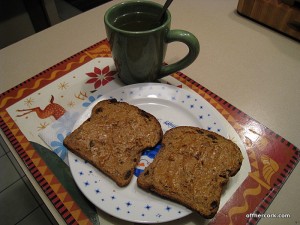 2 slices of cinnamon raisin Ezek bread with PB and honey plus a mug of tea.  Mmmm!  Supper was in no way filling, I wanted more! But sadly the leftovers were just enough for two full bowls.  It was yummy, but I just needed more.  Since my stomach felt empty and was sort of growling, I decided to roll with it and have a snack.

This morning I got up and kicked out five miles, wooo!  I wanted to do more but didn’t want to push myself.  In class last night, we were doing some kicks and where I was holding the pad kept digging into my thigh each time Scott kicked.  After a while it got really sore (as is going to happen after repeatedly taking a kick to the same spot) and now I have nice tight knot in that place.  Because conditioning class is in my future for this evening, I didn’t want to risk pushing too hard on the run and straining that muscle.

I have to tell you about the oats this morning because they were the best ever!  Sadly I don’t have a picture because I was way too busy stuffing my face.  It was regular oats kicked up gingerbread style:

At the last minute I tossed in a chopped apple to get slightly warm but not cooked.  Oats were A-Mazing! So flipping good!

After regular Thursday chores it was time to dig in for some lunch. 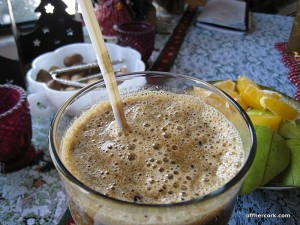 The weather today was incredible!  It was 20 and sunny for my run which was glorious but then it got up around 40s today.  When I took Rocky out for his walk we were both so excited that it was warm!  Wow what an amazing difference!  Not getting used to it though, I’ve learned that lesson the hard way!

This was our first conditioning class since before the holidays, crazy!  I could not wait to work it and get things pumping.  It was kickbutt!  Right before class I munched on an orange.  Seriously loading up on fruit today and I love it!

Back home for you know it! 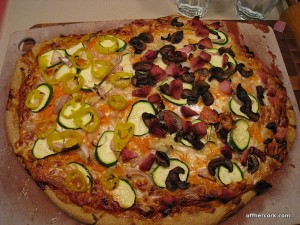 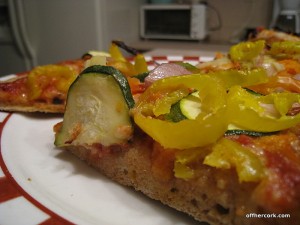 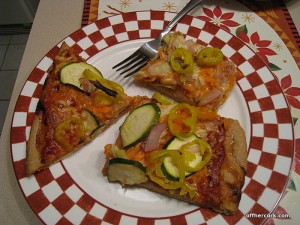 I had another slice after these because this A was hungry! Chomp!  Now it’s time for some wine and dessert!  Happy Thursday all!  Catch you tomorrow!