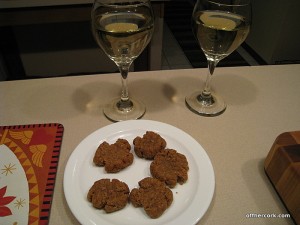 Wine and PB cookies!  We had a bottle open from Sunday and I didn’t want the wine to turn; there was just enough left for each of us to have a glass.  I also had some PB cookies because my bellah wanted something else.  I had three of the little guys.  Mmm  Vegan PB cookies with whole wheat flour and maple syrup.

I finished my No. 1 Ladies’ Detective Agency book and I have to say this one was really bad.  It was number 9 in the series and nothing in the book happened at all.  Nothing.  It was ridiculously boring and I’m a little bummed.  Why do series end up sucking?  I’m now reading Under the Dome by Steven King and we’ll see how that goes.  His post-accident books tend to be really awful, but I’m trying to keep an open-mind!

I did not run this morning.  I could feel my thighs this morning and there was no way they were going to want to do anything.  Impromptu rest day, I can dig it!  I slept in a bit and woke up ready to stuff my face.  I love waking up hungry!  I had a big honkin’ yogurt mess and then Rocks and I kicked it for a walk. 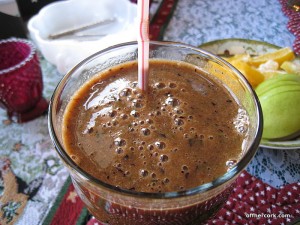 Lunch was usual with smoothie gloriousness:

It was delish but a little on the sweet side.  Normally I only do 1/2 C of pineapple juice, a cup is too much I think.  It was tart sweet.

Dinner was so easy!  Leftover bigos pulled from the freezer!  My version of course, all veggies and lotsa beans.  Mmmm! 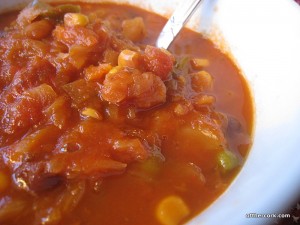 Let’s see if I can remember everything that’s in here: 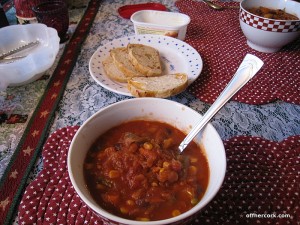 With some cheddar jalapeno bread on the side bought from Kroger with an approved ingredient list.

The following section I’m labeling as: What The HELL Target?!

Check out this crazy bidness!  Remember a few months ago when I purchased some bellbottoms from Target and poked fun at myself for them but also mentioned how they make the bum look major?  Well, they are my fave jeans and I wear them whenever I get the chance!  Now I saw another pair on sale at Target, same exact style, make, and model.  The only difference was color, the new ones are a very dark blue.  For seven bucks you can bet I snatched those up.  I tried them on and they were a bit tight but I just assumed:

1. They needed broken in a bit.

2. I just had a monster lunch so fiberful food bellah can have that effect sometimes.

They are the same size as the other ones, so why worry, right?  I washed the suckers and dried them because dried jeans are softer and just all around better.

A few weeks later I go to wear my new jeans to meet up with a friend and I can barely get them on.  Once on I cannot fasten them.  Like, can’t even make the two sides meet.

I know I didn’t gain any holiday weight so I was confused.  What is up with this?  Since there is nothing wrong with me something has to be wrong with the jeans right?

Check this shit out, favorite jeans on bottom, new jeans on top. 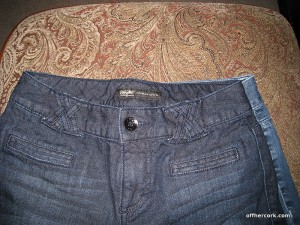 THEY ARE NOT EVEN THE SAME SIZE!

Even though they are technically the same exact pair of jeans and are supposed to be the same size, they are not.  No wonder I can’t fit into them.  I might be small but damn I’m not that small.

And then companies wonder why women have body image issues.  Maybe it’s because you screw us on sizes and clothes people!  Into the recycling bin they go. Bastards.

Has that ever happened to you?  I honestly have never experienced this before so I’m a little gypsy-crazy over it because dang it I wanted another pair of those jeans.

Toronto-girl has tagged me with a beautiful blogger award!  And I’m to tell you another 7 random things about me that you might not know.

What can the topic be?  How about…

What’s in a name?

2. My nickname is Andie which you might sometimes see around these parts.  Growing up in a household with two people of the same name could get confusing at times.

3. The only time my dad ever called me Andrea was when he had to raise his voice to try and get my attention.

4. My mom will always and forever spell my name as Andy, even though I’m a girl.

5. I never had to share my name with anyone during school.  Even college, there was never another Andrea in any of my classes. I enjoyed that.

6. I have no middle name, two are enough!

7. In the early stages of Scott wooing me, he tried to impress me with the fact that he could spell my last name without help.  Too cute!

Okay pretties, tell me some random factoid about yourself in the comments! Do your ears hang low? Do you have super sharp canine teeth? Spill it!