Hi pretty pennies!  This is my last Daily Eats post of 2009 and well this is a big deal.  It means that for over a year I have been recording my daily eating habits for all the world to see.  Whoa!

And now I’m changing it up in herez!  Listen friends, here’s the skinny, when it comes to breakfast and lunch I’m boring as all get out.  It’s pretty clear that for breakfast I will either have:

And for lunch I will have:

And for some reason I am thinking that you are incredibly bored reading about what kind of salad I had or which option I went with for breakfast.  Oh the suspense!  So I’m thinking that I’m going to skip over those.  I’ll mention it in passing I think and maybe talk about the smoothie more in depth, but what I’m going to start focusing on is dinner.  While we do have some specific days, like Fish Tuesday, dinner tends to be a bit more creative and different.  This will also allow me time to post on other topics I want to discuss and extend these posts to include more talk on training or whatever strikes my fancy.

Now if I do something totally different for breakfast or lunch, I’ll give you a heads up.

I got up to snow that didn’t go away, slapped on the YakTraxs and headed out for a 4 mile run.  I wanted to go farther but my foot was still a bit sore and therefore I didn’t want to push it too hard too fast.  This was the first day I rebelled and didn’t take a photo of my breakfast!  It was a huge yogurt mess and it was pretty glorious.

Lunch was typical and then later in the day we headed over to our stick fighting school to help demo the inside a bit.  It was a “spring cleaning” of sorts and also some walls were getting ripped down to get redone.  We helped with that and then headed back home to get all snug and comfy.

I will take this opportunity to say that I’m totally jealous of all the folks who got snuggies this year.  Those of you that got DSLR cameras this year for the holidays, well that’s nice but really this sister right here wants a snuggie.  I will stick with my point and shoot canon (which is awesome BTW) because a snuggie is where it’s at.  My lamenting about not having a snuggie lead to this conversation:

Me: I am totally jealous of those that got snuggies for Christmas.  I for shiz want a snuggie.

Scott: You want a snuggie?  Snuggies are just for one person.  When we snugs on the couch it’s about all of us snugging together under the good blanket.  You can’t do that with a snuggie.

Me: Well seeing as how this vacation the entire first half of the day is me spending time with myself because someone is sleeping till noon, a snuggie therefore would seem appropriate now wouldn’t it?

Me: Oh snap! If you wanna play that game, I can totally dish it out right back at you suckah!

Scott: I’ll get you a snuggie.

Although to make his point, he’ll probably get me the zebra print one and tell me that’s all he could find. I’ll know it’s just because he really wants to see me in some zebra print.

Both of us were hungry but I wasn’t sure what to make.  In all honesty, I was a little seafood-ed out so I didn’t really want Fish Tuesday.  Instead I made some pasta.  You don’t see that too often here at the HQ! 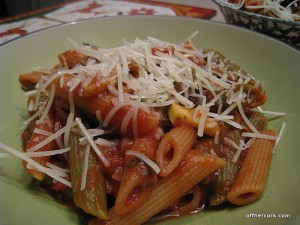 Whole wheat and spinach penne in a tomato sauce that had:

With some asiago on top for extra cheese factor. 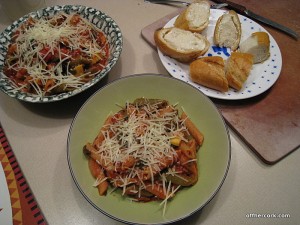 Bread on the side, my pieces are unbuttered.  The pasta was just alright because I am just eh about tomato sauce.  I was going to make pumpkin penne since that is my favorite way to eat pasta but then decided against it.  We always have that if we have pasta because I love it but Scott really digs on tomato sauce, which we hardly ever have.  I decided that it really wasn’t fair of me to always make my faves, he should have some too, and therefore I went the tomato sauce route.  It had some leftover wine in it for depth and some red pepper flakes plus cayenne for some heat factor.  It wasn’t bad just not entirely my thing.  It left me wanting some pumpkin penne! :p 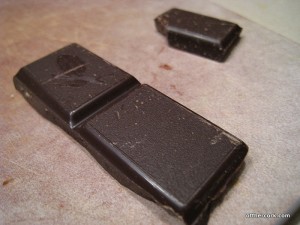 While watching TV, I had 3 squares of my love, sea salt chocolate.  Mmm!

I got up super early and busted out 5 miles.  I again was still taking it easy on my foot.  I didn’t wear the YakTrax this time around as most of the snow had disappeared except for a few areas on sidewalks.  I wanted to do 6 miles but the thought of having to plow through 3 inches of snow again to hit another loop wasn’t very appealing to me so I turned in and headed home.  Ahhhhh warm!

Breakfast was a huge bowl of oatbran and some coffee.  When Scott got up, we headed out for the day running some errands.  First up was Panera though for some lunch.  I forgot to take my camera so unfortunately there are no pictures!  Shame on me!

I have to say, that I used to love Panera and now I do not.  First of all, they only have two salad options that do not contain meat, Ceasar and Cafe or whatever it’s called.  I cannot get behind Ceasar salad because it has nothing going on.  It’s romain and croutons.  Not enough veg for me.  I chose the cafe salad which was a bit over dressed and still no veggies really.  Some tomatoes, red onion, and cucumbers.

Give me carrots, and broccoli, and some seeds, and maybe a pepper or to.  And I would also like some English seedless cucumbers, not the flavorless, wax heavy, regular cucumbers.

I had a side of veggie soup which tasted okay but was weird.  It had these white things floating around in it that I did not understand.  It was too soft to be rice or barely, so was it disinegrated potato?  I do not know.

I did order regular portions of both, none of this “pick two” business because that is not enough food for me.  I might be small but trust me when I say that when it comes to veggies and fruit, I can pack it away and create a food bellah like no one else!  The cashier was surprised, “Oh! Full sizes of both?!”  “YES!”

Plus the restaurant is always freezing cold, what is up with that?!  Gimme some heat, it’s winter yo!

I will be sticking to just hitting Panera for some bagel and bread fix.  Which I got before leaving; a dozen of asiago bagels, 2 demis of asiago bread, and 2 gingerbread bagels.

That’s right, I said gingerbread bagels.  Let your mind wrap around that one for a minute!

After lunch, we hit Lowe’s for some Method stuffs because Lowe’s has the biggest selection of it, which is surprising.  Then it was off to Target to check out the sales rack.  Target already has swimsuits out.  OY!

However I did score some pretty sweet deals.  I got a very nice wool brown winter dress coat, long, for $25.  Holla!  I also got some fleecy stuff, a sweatshirt, and a few other shirts for el cheapy.  They did not have any running tights, mittens, or running gloves out though.  Booo!

After Target, we headed back home to feed Rocks and then it was back to the school for more demo work.

When we got back from that, it was finally time for some supper!  By this point it was late and I was starving but lazy.  Scott had leftovers and I decided to have what I really wanted. 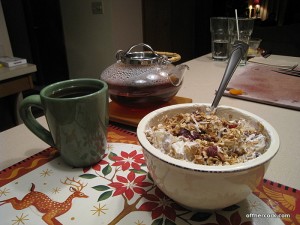 Some tea and a huge yogurt mess.  Basic messiness:

The tea was a relaxing one with rooibos and chocolate and mint.  I used my brand new teapot that Scott got for me. 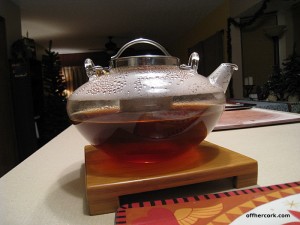 We watched some Pens action and then I kicked it to bed because I had a headache and was passing out tired.

Holy crap!  The last week of this year is totally flying by!  And so is this vacation, next week it will be back to the grind.  Boo hoo.

It snowed sometime during the night and I woke up to about 2 inches of the white stuff.  YakTrax back on and out the door for about five miles.  Just shy of five miles today.  I wanted to do 7 actually but the snow was kicking my ass!  It was a bit slippery and my sort of groin area was starting to get sore.  It’s the ligaments (or tendons? something) that connects my thigh to my hip bone will start to hurt and ache.  Not the outside, on the inside.  So instead of pushing myself, I headed inside.  I am calling 5 miles in the snow a success today.

I didn’t change right away though!  I slammed a glass of CS, grabbed a shovel, switched to boots and shovled the driveway and sidewalks (including some of the neighbors’ walks).  Totally selfish on my part, I wanted more exercise in today. :p

The thing that sucked about the snow today is that the temps outside have risen and everything is yucky slush.  Even when I headed out for my run this morning, before 8am, things were starting to melt.  Yuck.  It didn’t take me long to shovel, about 45 mintues.  By this point I was hungry and very much wanted a shower because I could smell my stank.  ICK! 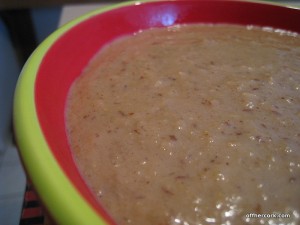 I am showing you breakfast today because it’s oatbran with a twist.  I decided to make “gingerbread” oatbran this morning because I have gingerbread on the brain.  I did the typical oatbran prep:

It was glorious!  Scott actually got up early this morning and finished what I could not.  He loved it to!  Tasted just like gingerbread.  The next time I will probably go down to only 1/2 TBSP of molasses since this was a bit sweet.

Lunch was same old although I did have a small amount of Amy’s tomato soup as well!  Smoothie had some coconut milk in it today making it extra creamylicious.

Sadly I did have to run out to the grocery store quickly today because we were out of tomato sauce and I can’t make pizza without it!  I was afraid there would be madness but the store was actually pretty quiet.

We are now into serious pizza making bidness over here at the HQ, check this out. 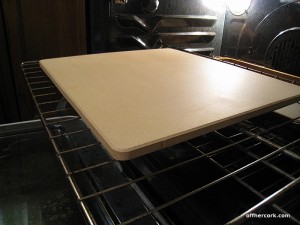 Holla! That’s a new pizza stone that my loves gave me for Christmas.  Oh yeah!  Tonight was total experimentation night as I worked the stone for the first time.  I kept the toppings light and did my best. 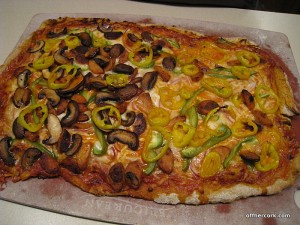 The pizza was fantastic! 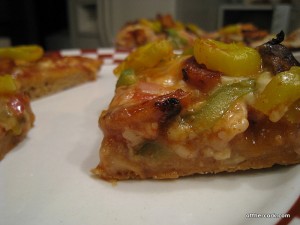 The crust was awesome!  Crunchy and chewy, so so good!  I had a cookie sheet under the stone to catch drippings but next time I’m going to go without.  I think it impeded the heat circulation a bit. 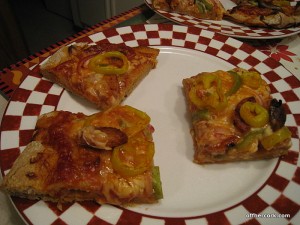 I sipped on some seltzer and also a wee bit of red with the pizza.  This was the last Pizza Thursday of 2009!  Wowy!

Now I’m off to watch some Twilight Zone (marathon on SciFi!), drink some more wine, and have some dessert.  YUM!

Be safe tonight my pretties and have a most fabulous New Year’s!