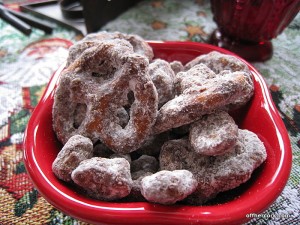 I have never eaten this snack mix before.  First of all it’s covered in powdered sugar which means it’s gonna be major sweet.  And secondly, it’s called Puppy Chow for frack’s sake.  I’m not eating that.  At the risk of sounding totally snotty, I don’t even feed my dog kibble, you think I’m gonna touch something that is named after some crappy dog food?

I don’t know what prompted me to look into this snack mix a bit further but I did and realized that it’s pretty easy to make.

I decided to come up with my own recipe because most of the other recipes I saw used lots of butter or shortening.  Even the vegan versions used vegan shortening.

Totally unnecessary!  I knew I could come up with something better AND it’s not named after a really crappy dog food, it has a festive cute name instead.  If you don’t dig on Reindeer Crunch, feel free to call it “Stuff” or “Addicting” instead, I won’t be mad at ya.

In a very large bowl mix the cereal, pretzels, and banana chips together.  In a double boiler, melt the chocolate, peanut butter, and coconut oil together until smooth and creamy.  Remove from heat and pour over top of the mixture in the bowl.  Stir to make sure everything is coated with the chocolate mixture.  Start adding in the powdered sugar until everything is white and covered in sugar.

Immediately start stuffing your face with your new snack mix.

I used coconut oil in place of the butter and shortening I saw in other recipes.  I also decreased the amount a great deal.  Using several tablespoons of butter or shortening is totally unnecessary and a bit excessive.  In fact I don’t even think the coconut oil is even required.  I bet this would work just as well without it.

I like Kashi cereals but if you want to use Honey Nut Cheerios instead, knock yourself out.  That would work just fine.

You probably could melt the chocolate, peanut butter, and coconut oil in the microwave but a double boiler is super easy to make and I think results in a creamier better tasting chocolate.  If you want to try the microwave, give it a shot, I’m not making any promises though!

I do have two sticking points.

1. Don’t use crap chocolate, get good chocolate.  This means bypass the Hershey’s or store brand chips and get yourself some nice chocolate.  I used Ghirardelli 60% dark chocolate chips.

2. When I say all natural peanut butter, I mean it.  No Jif, or Skippy, or anything like that.  I am talking peanut butter where the ingredients consist of two items: peanuts and salt.  That’s it.  The kind of peanut butter you have to stir first and then store in the fridge.  Trust me, your body and your friends will thank you for this choice.

This is a recipe that is easy and can be done in like 5 minutes.  It’s also a recipe that can make a ton if you need it for parties or perhaps for some gift giving.