Hi gang!  There was a little excitement today here at the HQ and by excitement I mean almost fainting with a slight chance of vomiting.  Fun!  That however will get explained in another more in depth post.  I know you’re looking forward to it!

This morning started off pretty normal.  When I took Rocky outside I saw some light fluffies on the deck and realized it was snow.  I didn’t think much of it and then it started spitting snow a little more aggressively.  Whee!  We came back inside and I started knocking out some work.  I saw more local peeps on twitter talking about snow and that got me excited.  YaY snow!

Then I looked outside and realized that it was seriously snowing, sticking to the roads and everything.  I don’t normally run on Monday mornings but I had to get me some of that action!  I quickly changed and hightailed it outside for a quick 4 mile loop.  Wheee!

Back home and showered, I made a huge batch of oatmeal.  Just plain old oats. 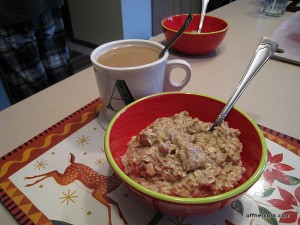 They were delish!  I plowed through the oats and in no time, I’m talking like 1/2 an hour, I was starving.  Like big time, totally empty, almost nauseous kind of starving. 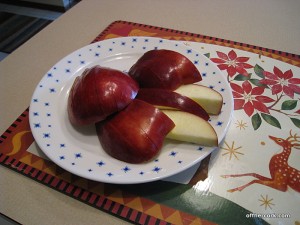 I then ate a piece of Ezek bread with PB.  No picture because I was trying to get it in my bellah as quickly as possible.  That helped but it didn’t fill me up or anything.  It just made me more functional and decrease the level of hunger from red alert to orange.  Or yellow.  I don’t really know my alert colors too well.

Then I made lunch which was quick and easy. 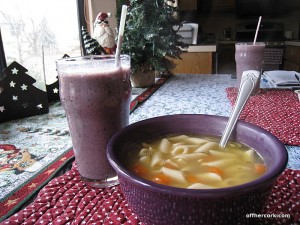 Canned soup that was supposed to be veggie penne but was more penne and no veggie.  Aside from the five carrots and two pieces of celery.  Complete with a purple people eater smoothie:

I didn’t eat all of that soup, about half probably.

I putzed around the house doing a whole bunch of things and then got started on dinner.  Since it was pretty clear that I didn’t fuel myself properly yesterday and today, and that I needed protein, I busted out the big guns.  Prepare yourself. 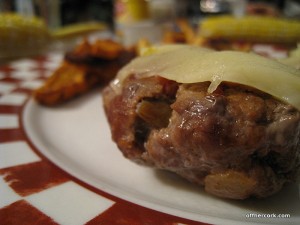 Yes, that is a burger.  I used sirloin (local, happy, you know the drill) and made some burgers for Scott and I.  Topped with pepperjack cheese. 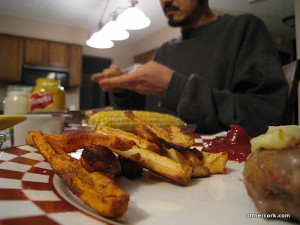 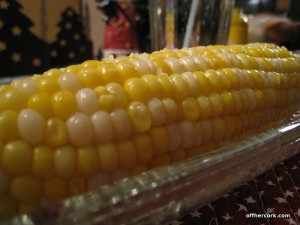 I also busted into my stash of frozen summer corn!  Oh yeah! 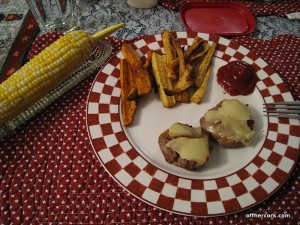 My burgers are mini size.

I still feel a little empty so I’m gonna hit the prune bag and also the nut bag.  Ba dum bum!  Then it’s off to brave the cold and dark to make stick fighting.  Another day where I’m counting down the hours till I can get in bed! :p