Hi gang!  I had every intention of posting this past weekend but time got away from me.  From the moment I posted Friday’s recap on Saturday, we were on the move pretty constantly.  I’ll do the best I can for a recap!  I promise it’s not terribly exciting though. :p

Saturday started off as usual although I did get up a bit later than I like on Saturday mornings.  Perhaps I’m the only one on the planet who gets cranky when they sleep-in too long on Saturdays? :p   If I get up late then I feel really rushed in the mornings getting ready for Muay Thai.    I did some work and then kicked it with a large bowl of oatbran. 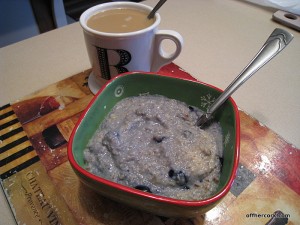 Scott and I got to discussing our day and because we were meeting friends later for dinner and we had other errands to get done, that sort of put a time crunch on the day.  Sadly class had to take a back seat while we did other stuffs.  Other stuffs part I was getting the xmas decorations out of their storage boxes and getting the trees put together.  Oh yes, multiple trees!  I love pine trees and all that glitters with them so we have a main tree that is used as our xmas tree.  Then I have all kinds of other trees scattered throughout the house. 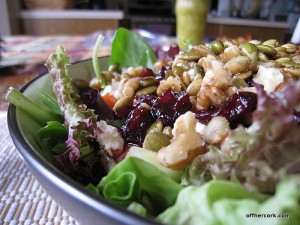 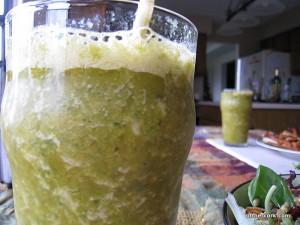 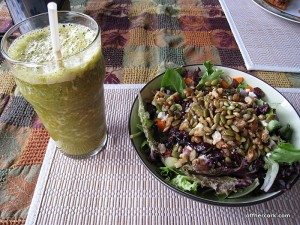 I would love to tell you what all was in my salad and smoothie but I don’t remember exactly.  Sorry!  It was nothing out of the ordinary, that much I do know!

After lunch we headed out to run some errands.  When we got back I had a small snack before going to dinner.  I didn’t want to show up starving because the restaurant we were going to didn’t really offer too much Andrea friendly menu items. 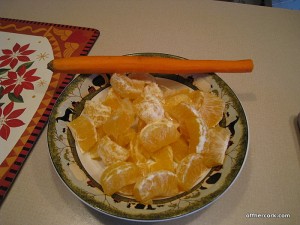 I got purty and then we headed out in the super chilly cold!  No pics of dinner because it wasn’t really an appropriate situation for me to be taking snap shots of my meal.  Sometimes even food bloggers have to lay low and realize that not all situations are going to lend themselves to being photographed.  And you know what I’ve learned?

That is okay.  It is okay that not every single thing I eat gets pictured and posted.  It’s okay to put down the camera!

We went to a local Mexican chain restaurant to meet up with friends who were celebrating birthdays this month.  I had a veggie burrito which was very low on veggie and very high on white flour tortilla and cheese (even though I asked for no cheese).  I ate the guts of the burrito and Scott ate everything else off my plate.  It was a sad burrito indeed.

I came home and was still a bit hungry and since I still had a long run ahead of me come Sunday morning, I knew I needed some fuel. 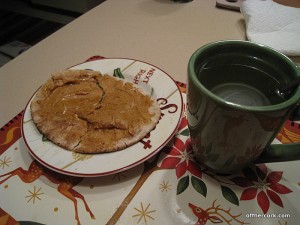 I had a whole wheat pita with PB and honey, along with a mug of tea.  I inhaled that pita and then hit the bed to read for a bit.  I finished Water For Elephants which the ending was really a let down.  The whole book I was on the edge of me seat and the ending was just so bland in comparison.  I was really disappointed.  Now I’m reading The Heretic’s Daughter.  Anyone else read that?

I bounded out of bed early Sunday morning because I was so excited to flipping run!  I love those mornings.

Once Rocks was taken care of, I hit the pavement adequately layered up!  I had on two pairs of pants and my winter running jacket because it was super cold out.  I only managed 5 miles for my long run though for two reasons.

1. My right groin muscle area felt funny towards the end of five miles.  Groin injuries can take you out quick if you aren’t careful so I curbed the run and came home.

2. My drawers were falling down! My tights I had on are too big and my other pair of pants I was wearing was not holding them up properly. Thus both pairs of pants were falling down.  Not something I really wanted to be dealing with on a cold winter morning run! :p

After stretching and showering, it was time for some fuel. 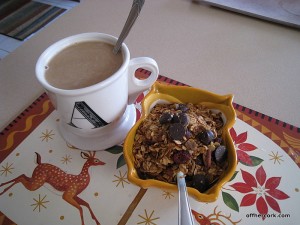 The last of the homemade granola (and a few chocolate chips!) and Stoneyfield Banilla.  I kicked it on the couch with Food TV on in the background.  They are showing Nigella again in the mornings!  Love her and the way she talks about food.  They also keep showing Sunny Anderson’s small commercials where she gives a recipe while utilizing a Viva papertowel.  So annoying!

It was at this point I should have been writing a recap but instead I was shopping at Nike.com for some new winter running gear.  I dropped an insane amount of money but it’s totally worth it because Nike winter gear is where it’s at!  I would love to try out some Luluemon or Athletica gear but dang they are expensive.  Nike can be expensive too but at least you can get stuff on sale.  For Luluemon, I just can’t justifying spending $100something on a running hoodie.

Scott was up by this point and it was time for some Sunday breakfast! 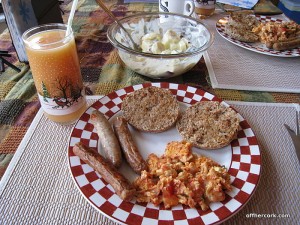 Scrambled eggs with salsa, chicken breakfast sausage, and an Ezek muffin with butter.  Apples and banana + yogurt in the background.  No close-ups because nothing is pretty. :p Drink was OJ+cranberry juice+seltzer.

I told you I have been craving Ezek stuff like crazy!

After Sunday breakfast, I got started on laundry and then putting the decorations up.  It takes me a day just to get them out and organized, then another day to actually put them up!

Sadly I didn’t get to finish!  But most everything is where it is supposed to be, I really just have to do the finishing touches.  Quick outside playtime with Rocks and a phone call to my mom, then it was dinner time.

Sunday Supper I could not get right to save my soul.  It was just one of those nights! 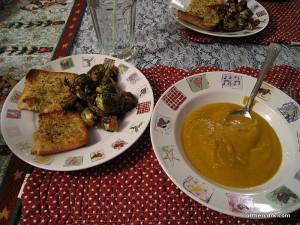 We had leftover butternut and sweet potato soup.  I pulled out of the freezer and heated up, this was totally tasty and fine!

Brussels Sprouts on the side with caramelized onions along with some toasted ciabatta bread with a bit of parm on top.  This is where things started to fall apart on me.

The sprouts were also supposed to have some crispy prosciutto but I tasted the prosciutto and it tasted off to me.  I ended up tossing it.  Then I went to make some garlic bread with some pesto I got from the Foodbuzz Festival, the pesto also turned on me.

Crikey!  So that got tossed.

Okay, no problem, sprouts with onions and another crusty bread would be fine.

The sprouts were fresh and I roasted them first before tossing them with the onions.  I cannot make fresh sprouts for anything.  I always over cook them and they turn out mushy. These were no exception, mushy gross mess.  Frozen sprouts I can make taste like a dream, fresh sprouts I am teh suckage.

I couldn’t eat them. 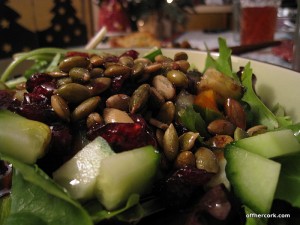 I made a side salad instead and all was right with the world.

By this point it was going on 8:30 and I decided to hit the couch.  Scott and I watched an old movie, Casablanca.  Then we snacked: 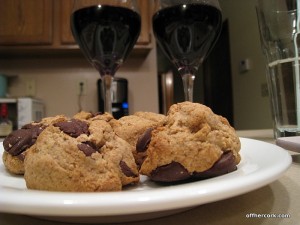 Wine and cookies!  YaY!  I have to say I didn’t care much for Casablanca.  The movie was alright but I really thought that Ingrid Bergman’s character was a shiz head.  Yes I said it.  And that sort of killed the movie for me.  I totally felt for Bogey and really just wanted to punch Ingrid in the neck.  What a brat!

After the movie, I read for about 20 minutes and crashed hard on my comfy bed.

See, I told you that you didn’t miss anything exciting!