Hi gang!  Can I tell you that I had the most glorious sleep last night!  We started the Pens game and I had some tea, which I apparently forgot to take a picture of.  Doh!

By 10pm, I was calling it quits and went to bed.  I slept like a rock and it was amazing.  The best sleep I’ve had in a while!

I was going to run today but decided to give my ankle a bit of a rest since I tweaked it a bit yesterday.  It’s okay, just a tad sore.  I was starving though so I got crackin’ on breakfast. 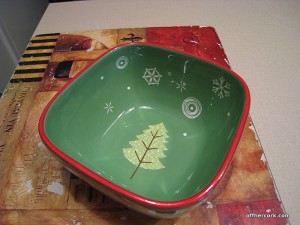 Today’s festive bowl!  And I believe this is all that I have which means I need to get some more stat! 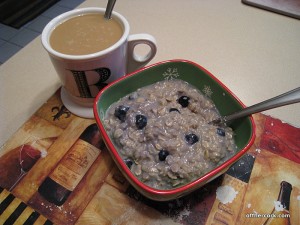 Huge bowl of blueberry oats and I’m not even kidding about its hugeness.  I made double the batch of oats that I normally make and ate most of it saving a bit for Scott.  I have no shame in wolfing down a large bowl of oats!

It wasn’t long after breakfast that I took Rocks out for his walk.  No hour walks today because of the durn ankle.  My ankle did get a bit sore during the walk so I guess it’s a good thing I didn’t run.  Once we got back home it started pouring rain and hasn’t quit. :o  Next to slush, cold winter rain is one of the worst things.  Blech. 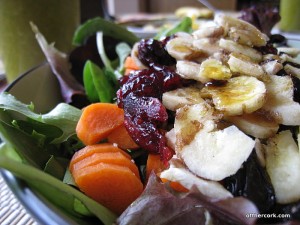 No feta today but cranberries and raisins were added.  And also some banana chips that were cooked in coconut oil and left unsweetened. 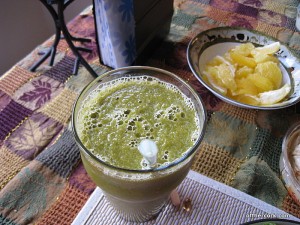 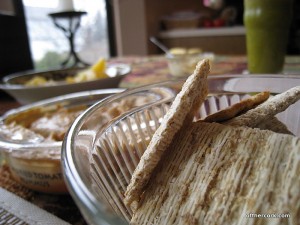 Sabra sundried tomato hummus and crackers.  I finally found this hiding out at another grocery store!  It’s really tasty but jeeze Sabra totally skimped on the sundried tomatoes.  There’s barely any in there! 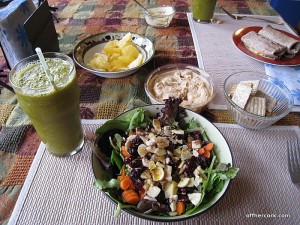 Oranges in the back for some fresh fruit action.

After lunch I got busy getting stuff done around the house.  I had some zucchini, last of the summer stash, that needed used up quickly because it was starting to turn.  I decided to use it to make some chocolate zucchini bread.  Heaven!

Then while I was in the kitchen I prepped dinner and got that ready so I would just have to heat that up later.  It involves peppers and salsa, but you’ll have to wait till you get down that far before you find out what it is.  I had just finished that and was about to add more garlic powder when the bottle caught on the shelf and I dropped it.

Wouldn’t have been a big deal except the top popped open and I lost half the container of garlic powder to the floor.

It was one of those huge containers that you buy at the warehouse stores.  Exactly.

I pulled out the Swiffer Sweeper but that stupid thing is only handy if you need to pick up some lint otherwise it stinks and doesn’t really work.  This meant I had to get out the vacuum.

I hate our vacuum.  It’s old and Scott refuses to let me get a new one because the one we have “is good enough”.  We’ve had this conversation loads of times.  The thing is, it’s a bag vacuum, which automatically makes it old and dated.  But because we’ve had it for so long, when it runs, it smells like my dog’s feet.

Whenever we have company over I have to vacuum three days in advance just to make sure the smell has dissipated by their arrival.  I just use a paint roller on the carpet to get the “freshly vacuumed” look right before company arrives.  I’m just being honest up in here.

You can imagine the fantastic smell I was assaulted with in the kitchen today:

Chocolate zucchini bread baking in the oven paired with spicy Mexican-ish type dish coated in garlic powder and all brought together and assembled in a bouquet of Rocky’s feet.

Don’t you wanna come over?

I got the kitchen cleaned up and decided that since the house already smelled like feet, I might as well keep vacuuming.  So the downstairs got taken care of.  After all of that it was time for dinner! 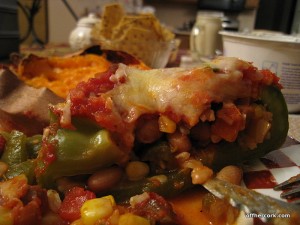 Then added in some frozen corn and some of the pinto beans.  I also tossed in the leftover brown rice from yesterday and added a little bit of salsa to that.  Stuffed in green peppers and baked for about 45 minutes at 375. 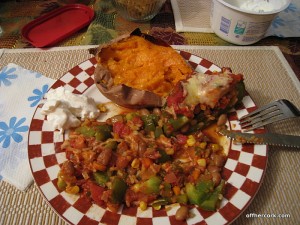 The last 5 minutes, I topped them with pepperjack cheese.

With a sweet potato on the side.  I love sweet potatoes paired with spicy things.  Someday I’m going to make loaded sweet potatoes and see how that turns out.  Oh! And there was also some Fage on the side for “sour cream”.  So good!  I apologize for the “mess”, it wasn’t until I was done cutting up half the pepper I realized I forgot to take a picture.  Ooops!

Now I’m off to read for a bit and then hit SF.  It’s cold and rainy and I so don’t want to leave my house.  Perhaps there will be some tea in my future when I get back home!  Till tomorrow!