On the first day of vacation, my true love slept till noon and I ran five cold miles.

I wanted to run a bit longer but during my run, my right hamstring started bothering me.  Stupid hamstring!  It started getting tight on me and achy, so I cut the run short at five miles.  I didn’t let that bother me nor did I even give the hamstring another thought.

I showered and then had a loverly bowl of oats. 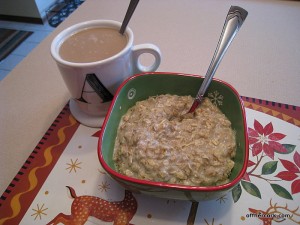 Regular oats and some glorious coffee.  Why does coffee always taste better when you’re on vacation?  I made the usual batch forgetting for a second that Scott wouldn’t wake up till lunch time.  Unfortunately I had to toss the leftovers, boo.  It was just a small amount so not worth saving really.

I got stuff done around the house including getting Rocky out for his walk and then I made us some lunchie. 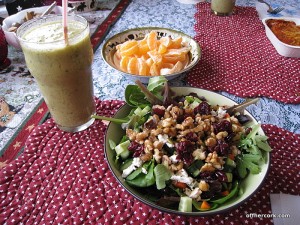 The thing I love about putting goat cheese on a salad is that it mixes with the liquid of the dressing and thins out becoming totally creamy and coating all the fixin’s.

After lunch it was off to TehKu to meet Lawgirl to chat and catch-up before we both embark on the craziness of the holiday.  She brought me some books to check out and also a little giftie!  I got some Maca powder!  Wooo!  I gave her some homemade goodies.  Only food bloggers would give each other healthy eats. :p 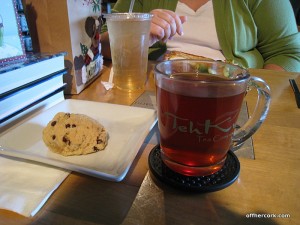 I had some tea and a chocolate chip scone while at TehKu.  The tea was called creamy caramel and it was awesome!  I had another mug of it too! 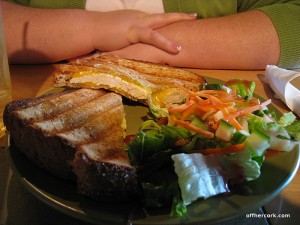 LG had the Cha-Cha chicken sandwich which also came with a side of a little salad.

We chatted for a while and then I stayed a bit longer so I could chat with Inggrie (owner of Tehku).  Scott picked me up around 5ish and we headed over to Whole Foods.

I desperately wanted to pick up some manchego cheese.  I wanted it for one of the special dishes I plan on making for dinner one night while we’re on vacation.  Because of this, we braved the store.  It seemed like it was jam packed with people who have never been to Whole Foods before. :o

By the time we got home and got groceries put away I was starving.  STARVING!  I had no desire to take 45 minutes out to make something new.

Freezer Saver to the rescue!

The only thing I made fresh was roasting some asparagus.  I pulled some crabcakes out of the freezer and heated those up. 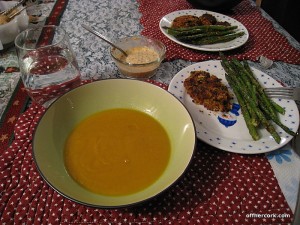 Along with some butternut squash soup, also from the freezer.

This is why it is a good idea to make a huge batch of stuff!  Because you will always have a homemade meal ready to go when you are tired/lazy/sick/time-crunched.

After dinner we plopped it on the couch and watched the Pens game.  They played the Ottawa Senators and so help me if I have to hear about that Senator dating/proposing/now-engaged-to Carrie Underwood one more flipping time I’m gonna lose my toque.

See what I did there my Northern friends?  I am so cultured and clever.

Then it was time for some specialness!  I mean this literally, not as an innuendo.  I understand your confusion though.

We opened up some sparkling wine to celebrate the first day of vacation!  Wooo! 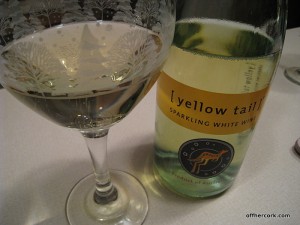 Yellow Tail sparkling wine is so good!  And not expensive at all, so if you like bubbly pick some up. 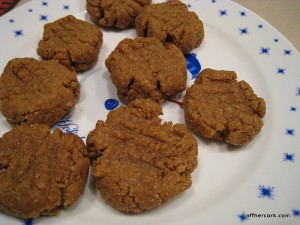 Some PB cookies also made their way into my bellah.

It’s pretty safe to assume that when I have a snack (cookies, pudding, etc.) and when I say that I pulled something from the freezer, this is all homemade stuff.  If it isn’t, I promise I’ll give you a heads up.

On the second day of vacation my true love slept till 11:30 and I ran a gimpy 1 mile.

Remember my stupid hamstring? Well since I cut my run short yesterday I figured that things would be better but as soon as I started running my hamstring immediately got tight and I knew that I had to head home.  I wouldn’t even be able to go a super shortie 2.5er.

I wanted to do 7 miles today or at least 6, but that was not happening at all.  Maybe this is Universe’s way of telling me that during this vacation, perhaps I need to actually relax and not just talk about it.

I came home, put my jammies back on and had a mug of coffee.  Then I made some breakfast. 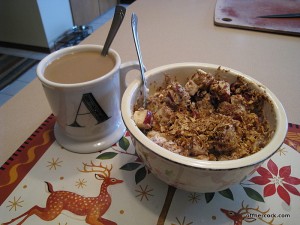 After breakfast I did as many chores around the house as I could while princess slept.  When he got up then I could get down to business and clean this mofo up!

After all of that it was time for some lunch up in here!

Salad same as yesterday, switch out the walnuts for pecans. 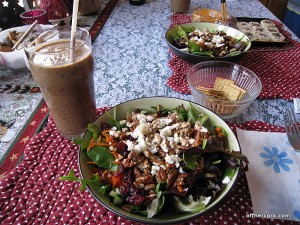 Some crackers on the side, Back to Nature’s version of wheat thins.

After I ate all that, I got up and had an orange because I was craving some fresh fruit.

I did some laundry and walked Rocky.  Basically just stuff around the house to get it in top shape for the holiday.  Woo!

My mom got her package today so she should be all stocked up with some baked goodies.

I talked with Scott about Christmas Eve dinner beforehand and he insisted that we still have pizza since it is a Thursday.  Pizza it was!

But it’s Christmas Pizza!  Everything on it is either red or green. 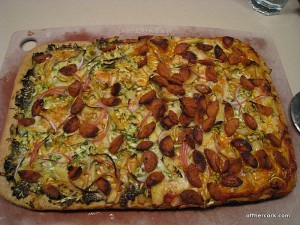 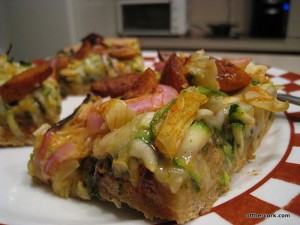 YUM!  I didn’t have any green peppers or I would have added some of that too. :p 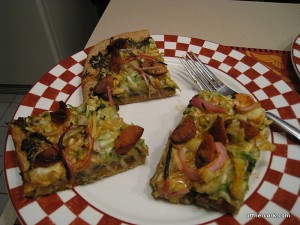 How much do we love Pizza Thursday?!  YaY!!  I ate those three and then had another very wee piece.

Now I’m going to hit the couch with some red wine and chocolate.  Oooo!