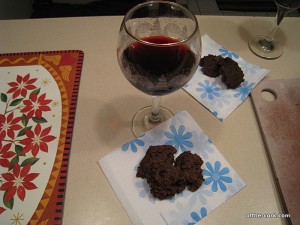 Friday evening my snack of choice was some wine and cookies!  These are brand new cookies I created and all I’m telling you about them is that they are made with beer.  Yes you read that right, beer.  In cookies.  I am awesome and so are these cookies.

I slept like crap Friday night and woke up Saturday groggy and staring at the winter craziness that was going on.  We had snow and it was coming down fast.  However our weather was greatly fluctuating between being at freezing and then above.

This means it would snow/rain/snow/rain.  Good times.  I knew right away that we weren’t going to be heading out to MT in that stuff.  I contemplated a run for very long time, so long that I got too hungry and it became too late to head outside.  I would be lying if I said I was bummed because normally I love running in the snow.  But yesterday I wanted nothing to do with it.  I fed myself instead. 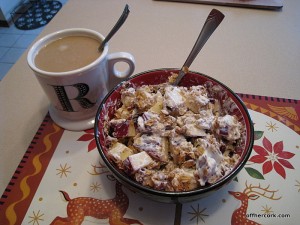 In my bellah went another yogurt mess instead and it was delish!

Eventually Scott got up and we pretty much hung out and chatted.  Other than when we sit at the table for meals, we haven’t really just sat on the couch and chatted for a long time.  It was a nice moment and I was loath to end it.  However my belly and Scott’s belly began to growl and it was time for some lunch.

It was late in the day because we talked for so long that my lunch was kept simple. 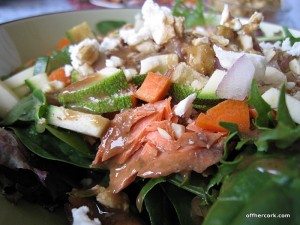 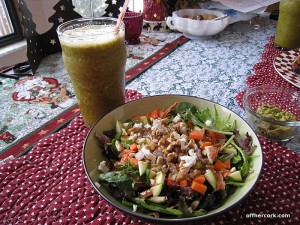 Smoothie on the side!

I was going to start baking at this point and that is when I discovered I was out of flour.  Ack!  I didn’t even realize I was low, shows how much I pay attention.  I had no desire to go to the store on a Saturday but I ended up going.  My motivation wasn’t even flour!  I wanted to wrap gifts and we realized that we were very low on wrapping paper.  It was my need for more wrapping paper that got me moving.

Hours and a bunch of craziness later we made it back home safe but minus whole wheat pastry flour because the stores were out.  Curses!

I did get Scott’s presents wrapped and then busted out some dinner.  Quick and easy risotto. 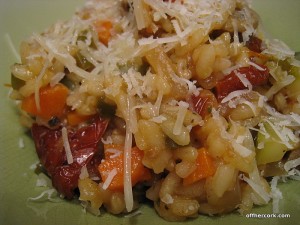 Mmmm!  Risotto is one of those meals that I make when I’m tired and need something hearty but easy.  Bonus is that it only uses one pot to make a whole meal.  It had:

Topped with a bit of parm and asiago cheese. 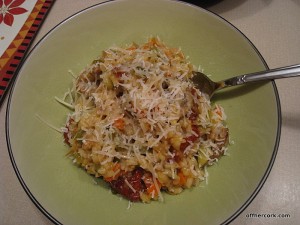 Yum!  It wasn’t long after dinner that I headed up to bed to read before calling it a night.  And that wasn’t long either!  I finished my book and zonked out.

I got up with my alarm this morning and immediately got ready for my run.  I was running today come hell or high water snow and ice.  It wasn’t very cold out thankfully but I was running in some “wintery mix”.  Blech.  I cranked out 7 miles, wooo!  It’s safe to assume that I drink some chocolate soymilk after each run, even if I don’t have a pic to show you.

After stretching and a shower where I ran out of hot water (major suckage), it was time for some fuel. 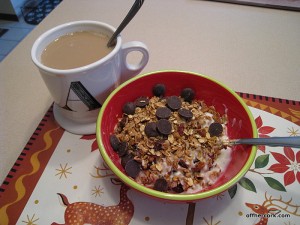 I kicked it on the couch for a bit eating, watching Food TV reruns (they showed the exact same episodes last weekend!), and worked on my recipe post.

Then I headed into the kitchen where I got some chops in some brine and started on some more nutroll making.  I got some stuff going and Scott stumbled his way downstairs.  I took this as a signal to get started on some Sunday Breakfast. 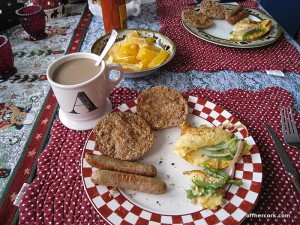 Sorry no close-up, but nothing was pretty. :p  I made a big omlette for Scott and I to split.

It was gooey and delish.  There’s some chicken sausage on the side, an Ezek English muffin, and some oranges in the middle.  Breakfast was awesome!

During breakfast Scott and I had a conversation that made it perfectly clear that Scott isn’t a runner.

Me: It wasn’t too cold today so the 7 miles wasn’t bad.  However by the end of 7 miles, I’m cold and ready to come home.  I don’t know how to handle that so I can increase my miles.

Scott: Are you tired at the end of 7 miles?

Scott: Well then could you truck-it?

Me: What makes you think I’m not already trucking-it?

Scott: Because you just said you weren’t tired.

Isn’t that the best advice though?  Just run faster and get it over with quicker.  Oh if it were only so easy.

I baked the rest of the day working on gifts and stuff to send to my mom.  I’m hoping to get packages out in the mail tomorrow!

Once baking was done, and I put in a quick call to my mom, I got started on dinner.  Because I already had the chops ready to go, I just had to assemble everything else which went into the oven. 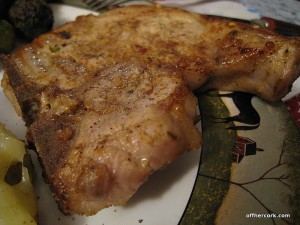 Pork chop that was brined in a cider brine.  Yummy! 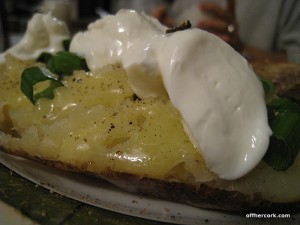 Loaded baked potatoes!  Regular potato baked and then topped with Irish cheddar (me and cheese are best buds this weekend apparently), green onions, and sour cream (2% Fage).  So good! 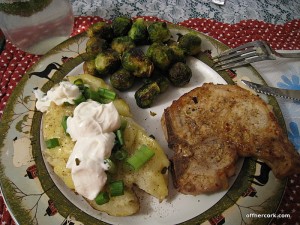 With some roasted brussel sprouts on the side.  Fabbo and very filling dinner.  I ate all my 1/2 (the other half is leftovers) potato but everything else went to leftovers.

Alright gang I am out!  I’m going to have some wine and perhaps a snack in a bit.  Then it’s off to bed to get ready for Christmas week!  Whoooo!