Hi lovelies!  Scott and I worked hard Monday night and then I realized it was after 10pm!  Yikes! I had to get moving and hit the hay.  I did have a small glass of Riesling while working.  I sipped that thing for hours. :p 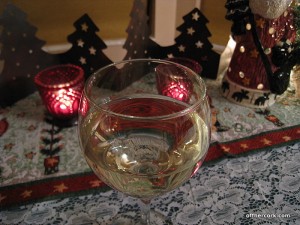 I woke up and headed out for a run even though it had started sprinkling.  I decided to just wing it and get as much done as I could.  I ended up coming home at 4miles because it was chilly, windy, and rainy.  That kind of mist rain that you can’t get away from and it blankets you in wet.  Ick.

Shower and then breakfast! 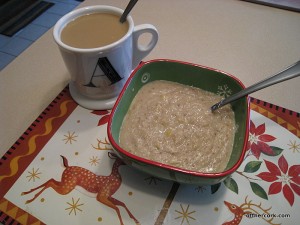 I had some oatbran but a little differently, I used vanilla SO Delicious Coconut milk instead of Vanilla soymilk.  The verdict?  It was alright but I wouldn’t do that again.  The oatbran wasn’t as thick or creamy and the coconut milk actually provided a bit of a tang at the end.

I did get Rocky walked and while it wasn’t misty raining out, it wasn’t pleasant.  It got colder and the wind picked up, loverly.

Christmas prezzies are starting to arrive at the HQ!  Both Scott and I only shop online and so we have to coordinate with each other once packages start shipping so we don’t accidentally see something we shouldn’t.  Amazon is generic so if we have something shipping from there, we can reveal that and the other person is able to view the box.  This is in the event one of us has to retrieve the parcel while the other is otherwise occupied.  If it’s coming from someplace else then strict measures are put in place and discussions are held to ensure nothing is witnessed until permitted.  Told you, big deal ’round here!

Lunch was a normal affair with something hot thrown to shake things up and to help me stop shaking (from the cold). 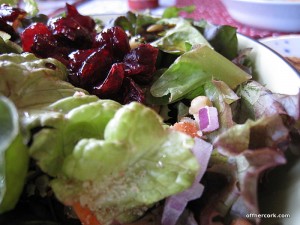 Salad, same as Monday minus the feta. 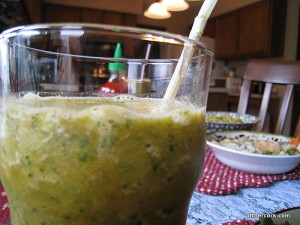 If you’re wondering about the winter situation and if smoothies now make me cold since it is cold outside, the answer is yes.  Yes I’m usually freezing once I’m done with lunch and I use washing the dishes as a way to help me warm back up.  I’m not willing to give up smoothies though so sacrifices must be made. 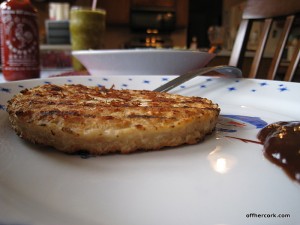 Oh hello there grilled chick’n patty! Long time no see! But while you were tasty, you did not keep me warm.  For shame! 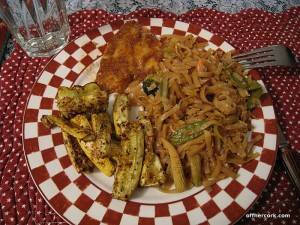 We hit class and it was stellar.  Then we came home to a twisted Fish Tuesday!

Roasted yellow squash on the side with:

On the side for the carb was leftover Pad Thai!  I had been dreaming of that bad boy all day long.  Mmmm!

While eating we listened to the Pens game on the radio since it was not televised (grumble).  After dinner, we hit the couch with some wine. 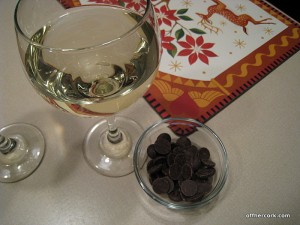 That bottle is finally kicked!  Took us a while! :p  I also had about 10 dark chocolate chips.  I thought I wanted something a little sweet after dinner and it turns out I didn’t at all. We finished listening to the game while we sipped.  Pens spanked the Flyers but good.  I headed up to bed and crashed out around 11pm.  I was pooped!

Up bright and early this morning for a long run, 7 miles, what what!  It was in the teens this morning temp-wise but there was no wind so it was cool.  I did get cold towards the end of my run and was happy to head back inside.  It feels like I haven’t run 7 miles in ages! I was so happy that I was able to bust that out this morning.

I had a small glass of CS and hit the shower for a long rinse!  Then it was time for a big honkin’ bowl of oats. 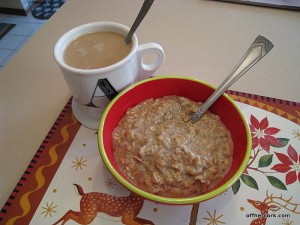 Awesome!  Plus coffee which was fantastic.

I did some work, walked Rocky, and then did some more work.  I headed into the kitchen for some lunch and totally changed things up today. 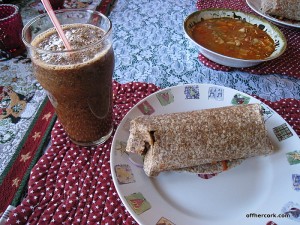 Check me out rocking the lunch diversity! 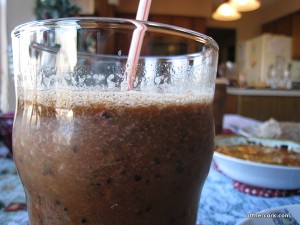 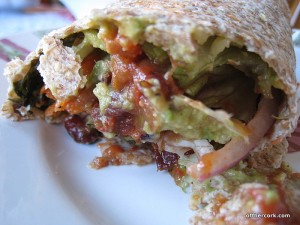 And A WRAP!  Dude, I never hardly ever eat wraps let alone eat a them for lunch.  But let’s talk about this glorious piece of work.  First of all it’s on an Ezek tortilla, I finally found some at Whole Foods.  These wraps are great!  And a little different in texture and taste, so if you try one don’t expect it to be all fluffy like a white or wheat tortilla.  It’s chewy, grainy, and nutty.

Inside the wrap is:

All rolled up and trying to hold it together. Seriously who says you have to have meat in wraps?  Not moi!  It was filling but didn’t leave me feeling like I had a brick in my tum.  Thanks to the fresh raw veggies and the sprouted tortilla!

After lunch I got busy working in the kitchen.  I tried three experiments and I’m calling 2 of them successes and one a flop.  It was only a flop though because my flax seeds had turned on me.  Boo!

One was a complete success and the other is a success to me!  I made some PB cookies and while I love them, I know not everyone would dig on them because they aren’t sweet enough.  I dunno why everyone needs tons of sugar to be happy!  They were low on sugar and made with WW flour so while I think they are fabbo, I can see how others might not. :p  Which is okay because it means they are ALL MINE!

I’m lovin’ on the caps today I guess.

I finally got hungers for dinner and heated up some leftover bigos from Sunday. 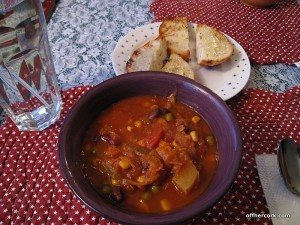 There was also 1/2 an asiago cheese bagel that I ate and if you think I didn’t put any extra cheese on there, you would be wrong.  That wasn’t enough for my 7mile booty, so I had an additional slice of Ezek bread with my soup.

Now I must get ready for SF class!  I have a few things to wrap up before we leave.  Till tomorrow my pretties!