Hi guys!  Settle in because it’s a long one!

Yesterday was jam packed but yet it’s going to seem like I didn’t do much. :p  I got up early and settled into my Saturday morning routine.  I had a cup of coffee and plopped down with the laptop for a bit.  Then I got busting on some breakfast in prep for Muay Thai. 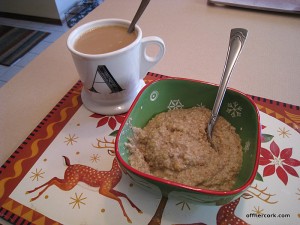 A nice bowl of oatbran and some more coffee.  I inhaled that because I was a bit hungry and then started cleaning up the kitchen.  Before we headed out the door to MT, I had a handful of raisins because I got a little munchy on the way out.

After class we headed to North Market to pick up some holiday treats from the two butchers there and also picked up Rocky’s case of goodies.  While there we headed right over to Hania’s Olde World Cuisine, a brand new Polish food stand that just opened up about a month ago.  I first heard about this new stand via Diana’s blog and knew that the minute I was back at North Market I had to visit.

Unfortunately, I forgot my camera or I would have taken pictures of all the glorious food.  Oh man I was in heaven and so was Scott!  Little known fact, it wasn’t until Scott and I started dating that he was finally introduced to sauerkraut, kielbasa, and pierogies.

The verdict is that he loves all that stuff!

We had a chance to chat with the owners who are extremely nice and very passionate about bringing the food of their culture to the folks of Columbus.  I realize I’m pretty biased but Eastern European eats is about as good as it gets.  It’s full of flavor and will keep you full, warm, and toasty.  Completely comfort food for me.

When we got back home, I whipped up a quick late lunch for us. 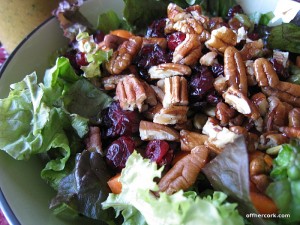 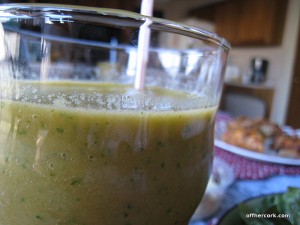 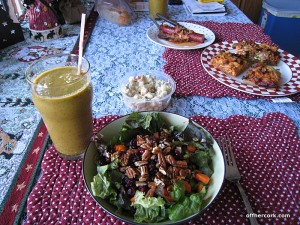 YUM!  In the middle is some “potato salad” which I basically inhaled but I promise I didn’t eat it all!  It had:

In a mayo sauce with ground black pepper and other various spices.  Scott was also munching on some handrolled kielbasa with a bit of sauerkraut stew on top.

I probably died at that point because I swear I was in heaven.  I had a few bites of the kielbasa to test it out for authenticity.

They do not make their own kielbasa but I know wherever they got it from, it’s handrolled because the knot at the end of the casing was clearly not done by a machine.  I’ll see if I can find out where they got it so I can score some myself!

Not pictured: I had two clemintines on the side for some extra fruit action.

After lunch I showered and then finally made some granola up in this place!  I also made some homemade oat bars.  Woot!

Once that was all said and done, I chilled out and got some holiday cards finished.  Not all of them, but most!  Which was a nice relief.

I would be lying if I said that I wasn’t dreaming about dinner that entire time.  I threw caution to the wind and decided to indulge a bit. 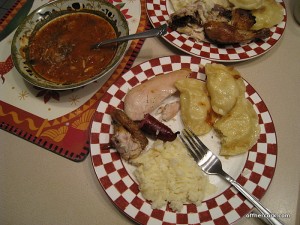 On that plate of Polish goodness is rotisserie chicken, mashed potatoes, leftover kielbasa, and some potato and onion pierogies.  On the side is some Bigos or sauerkraut soup (also referred to as Hunter’s Stew). This version has a tomato base and has:

Both Scott and I were pretty much like pigs in shit eating this dinner.  Sometimes you just have to let go and GET IT!

Don’t worry, I was done eating after that meal.

We watched some hockey and then I kicked it in bed reading for a bit.

I woke up just before 6am for a potty run and realized that it was pouring rain outside.  Crap!  I turned off my alarm and prayed it would be done raining by the time I woke up.

Well it wasn’t, it was still pouring rain.  Needless to say after my fantastic, yet heavy meal Saturday night, I was ready for some exercise action.  I didn’t want to sit on my butt and working the heavy bag was out since Scott was still sleeping.  I decided on doing some 30 minute shred and worked through all three levels.  Once I was done shredding it, I showered and finally hit some breakfast. 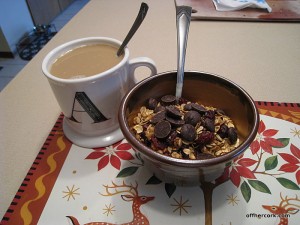 Yogurt and granola, with a few dark chocolate chips on top because that’s my Sunday treat to myself!  I had a big honkin’ bowl of it too.  After eating breakfast, it was getting late and I wanted to get some soup in the crockpot.  I got started on that and my loves woke up.  I think it was the smell of more sauerkraut that roused him outta bed.

Soup done and cooking away, it was time for some Sunday breakfast! 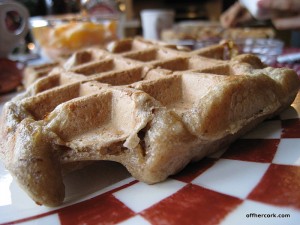 I made some banana walnut waffles with SO Delicious vanilla coconut milk for the base. 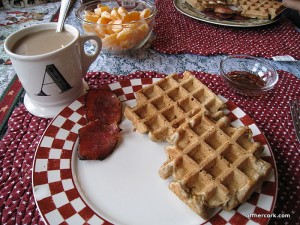 Some Canadian bacon on the side (local), maple syrup for dipping, and a whole bunch of clementines in the middle.  MMMM!  Everything was so good and tasty, just exactly what I needed.

I got some good news today that all my packages are currently being shipped and on their way here to be wrapped and made pretty.  Hooray!  I still have to finish up presents for Rocky but I am done.  Whoo!  Now I can focus on baking and getting stuff out in the mail.

I got the rest of the xmas cards finished and now everything is ready to hit the mailbox.  I had a small snack right before making out the cards. 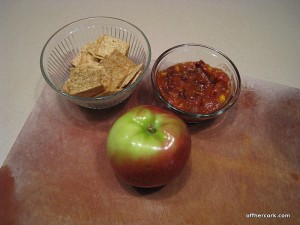 Soup was cooking all day long and smelled insanely good.  I didn’t have my fill of Bigos so I made some with my own twist.  I wasn’t looking for anymore meat products so I did a little subbing. 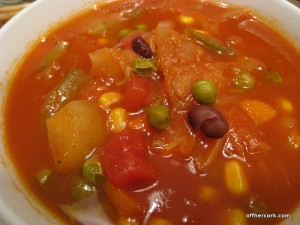 It’s still a tomato base and also some chicken stock, the soup has:

There’s seasonings in there, some Worcestershire sauce, and garlic.  Always garlic in Polish food! 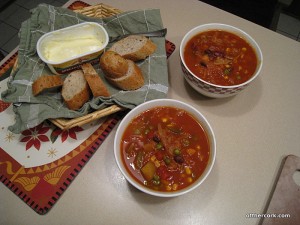 If you don’t like sauerkraut then I’m sure this doesn’t sound too good, but for those of us that love it, this makes us pretty happy.  A veggie-filled and hearty soup was perfect for this gloomy and dreary Sunday.  A little multigrain bread and buttah on the side.  Hells yes I cleaned that bowl out!  And Scott even went in for seconds.  Mmm mmm!  I made a freaking huge batch of it too, filled my whole crockpot.  Normally we eat Sunday Supper at the table but we wanted to get the hockey game finished so we would have time to watch a movie.  Now I’m off for snugs and movie watching.  Hope you all had a great weekend my lovelies!