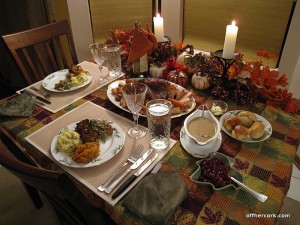 This Thanksgiving was a bit different for our household this year.  We’ve been eating clean for over a year now and have been reaping the benefits.  Our eating habits aren’t even close to being the same as they were last year at this time.  We eat way more produce and a lot less meat than we did a year ago.  I’m a lot more consciousness about ingredients and what exactly goes into a dish.  I’m also a lot more aware of where my food comes from and what I choose to put on my table.

This year my focus was on making all of our favorite things yet keeping things healthy at the same time.  Is it possible to live through the holidays eating fabulous food that not only feel like indulgences but are also healthy for you?  I was going to try and find out.

What I learned this Thanksgiving was that you have to pick and choose your battles in terms of the recipes and how you approach cooking the different components of the meal.  I am not a vegan nor am I a vegetarian, however I don’t think that every dish needs a ton of butter, dairy, or eggs in order for it to be tasty or complete.  Sure it’s the holidays so a bit of leniency here and there is fine but that said, just because it’s the holidays doesn’t mean I need to start channeling Paula Deen by putting butter and bacon in everything.

I also learned that because butter tastes good, that means I don’t need quite as much of it as previously thought.  A TBSP or less provides enough richness and decadence, there is no reason to use a whole stick of butter.

What I ended up doing was decreasing the amount of butter in a lot of dishes or sometimes I didn’t use it at all.  Same for milk and eggs.  I had a game plan and stuck to it.  I wrote out what our menu was going to be and then I thought about the ingredients for those things.  Where can I use less butter or none at all?  Where can I use soymilk instead?  Where can I use egg whites instead of whole eggs and where can I lose the eggs all together?

Our Thanksgiving Dinner for 2009 was as follows:

I used a turkey breast this year because we don’t eat nearly as much meat as we used to, most especially me.  Cooking a whole turkey would be very wasteful and doesn’t really make sense for our lifestyle anymore.  Previous years I would take a whole stick of butter and mix that with seasonings and fresh herbs to rub under the skin.  That’s a lot of butter!  Granted we had a much smaller amount this year (5lb breast instead of a 11 lb whole turkey), but I only used 1.5 TBSP of butter to rub under the skin and it was more than plenty.

When I say homemade I mean I made my own mushroom cream sauce.  Campbell’s does not live at this house.  My cream sauce only had a small amount of butter in it, about 1/2 a TBSP, the rest of the fat for the roux came from olive oil.  I did use unbleached flour for the roux and I used plain soymilk with beef stock to help make things creamy and rich.  This is probably the dish I’m most proud of because it was so damn good.

Used two bananas for sweetness and just a touch of maple syrup, and that’s it.  In the past I made this dish with half and half, eggs, brown sugar, and flour, all mixed together.  I realized that none of that stuff was needed in order to make a great sweet potato casserole.

Was made with bread cubes from Whole Foods, no butter just olive oil, and organic chicken stock.  In the past I would have used butter instead of oil for sauteeing the veggies and also added in an egg before baking as a binder for the stuffing.  I realized this year that there is no need for an egg at all.  If the stuffing is moist enough it will stay together on its own.

I did use milk and butter in the potatoes, this was part of picking and choosing my battles.  We don’t eat mashed potatoes often but it is something we have more than any of the other dishes.  When I make it on occasion I don’t use butter and use soymilk for the liquid, so I thought I could splurge a little here and use milk and butter.  However, I didn’t use much butter–about a TBSP–and the milk was 2% organic milk.

I used olive oil and whole wheat pastry flour for the roux.  Yeah the WW flour does make the gravy a bit grainy in texture but the taste is still awesome.

Made with cranberries, cider, and organic cane sugar.  Delish!

Scott loves those dinner rolls that you buy at the store and finish cooking at home.  You know what I’m talking about right?  He always requests those for Thanksgiving, it’s the one thing his family always had that he enjoyed a lot.  I always got them for him because I want him to have things that he enjoys.  This year was different though because we did not have those rolls.  I almost bought them.  Almost.  Then I thought to myself, “Okay, what exactly do they have to do to those rolls to keep them shelf stable for so long since they are half cooked?”  I couldn’t think of anything positive for an answer.  I explained to Scott that I could not in good conscience purchase and serve those rolls.  I said that I would make him rolls instead and he was totally fine with that.  Whew!  I made whole wheat dinner rolls with soymilk instead of regular milk and got rid of the butter in the recipe.  I did a light egg wash on the outside for color as they baked and these turned out to be great rolls!  I loved them and Scott loved them, so I was a very happy lady.

The crust was vegan made with a mix of whole wheat pastry flour and unbleached all-purpose flour, ice water, and olive oil.  The filling I used egg whites and soymilk but the egg whites could easily be subbed with flax + water for a binding agent instead.

I’m extremely happy with the way our Thanksgiving turned out this year.  I feel like our entire meal was a nice holiday treat.  We didn’t have to compromise taste to get a healthier dish and I felt really good about everything I put on the table.  Of course I’m already planning for next year!  Always in the planning stage!

But don’t just take it from me!  Here’s what Scott had to say about our meal this year:

As readers of OHC may have noticed, over the last year our healthy
eating practices have coalesced into what we have now.  The changes
have been gradual, but quite different from years past, and are
generally characterized by:

Dinner menus may have changed, but excellent flavors have been
maintained and discovered; a testament to Andrea’s cooking and
innovation.

But what about Thanksgiving?  A meal that traditionally revolves
around a 12+ pound turkey, and many sides the recipes of which would
be incompatible with our new eating practices.

In the end, there was nothing to worry about (not that I harbored an
ounce of concern).  What I got was a delicious feast that was
consistent with our new eating habits while maintaining the traditions
of our Thanksgiving meal.

We still had turkey (instead of a full turkey we opted for a turkey
breast (less than 6 lbs)).  We still had stuffing, mashed potatoes,
green bean casserole, sweet potato casserole, cranberries, roasted
vegetables, gravy, dinner rolls, and pumpkin pie.  Everything was made
from scratch using natural ingredients with zero loss in taste.  In
fact, everything was crazy good!  Mmm, ahem– The traditional foods,
tastes, and feel of Thanksgiving have continued on, though the means
of preparation, ingredients, and quantities may have changed.  All in
all, plenty to be thankful about.

How was your Thanksgiving this year?  Did you make any changes or approach it any differently than previous years?

15 thoughts on “What I learned this Thanksgiving”