Hi guys!  Another very long day yesterday and I’m not quite sure when it’s going to let up.   I don’t mind being busy but when it starts putting a crimp into other things and causing my schedule to be all wonky, then I start getting stressed out.

Yesterday there was no run!  Booo!  We had a terrific windstorm here yesterday morning and I’m so not running in that.  Been there, done that, and running in cold wind stinks!  So I went back to bed and slept till 8am which meant I got 10 hours of sleep. :o  Crazy!

After taking care of Rocks, I made a yogurt mess with new yogurt. 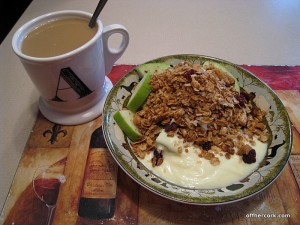 Stoneyfield Banilla!  Oh heaven!  It is so so good!  It’s a little on the sweet side and could be less sweet for my taste buds but it’s some seriously good yogurt.  I used a granny smith apple in my mess to help combat the sweetness a bit and some homemade granola.  Which I’m almost out of; I’ll have to make more this weekend.  And there is no fake banana flavor, it’s made with actual banana puree!  Love you Stoneyfield!

After breakfast, I did a few things around the house and then got started on some work.  The current batch of stuff is for a series of interviews regarding a study.  The upside is that it’s lots of work; the down side is that since it’s a study, I have to type the same thing over and over again.  Meaning, the same questions by the interviewer.  That gets old fast.  Umph!

Then I made some lunch!

Since I missed Fish Tuesday, I needed some fish somehow, so into my salad it went. 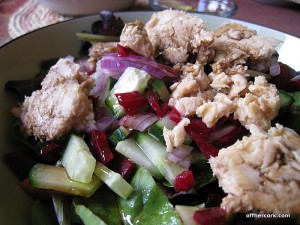 Topped with balsamic and olive oil.  I’m trying to space out my balsamic use since it’s almost gone.  Eeep! 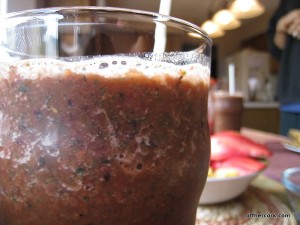 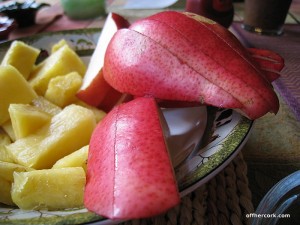 Red pear in the middle with the last of the pineapple. 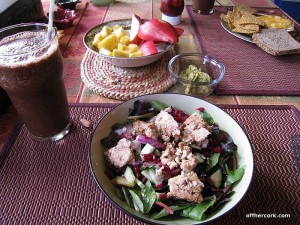 That leftover guac was for Scott.  Lunch was delish!

More worky.  I eventually took a break to stretch my legs and walk Rocky.  I also just needed to get away from the computer for a minute and not focus on it any longer.

Once we got back I worked and busted out the rest of the tapes in my queue.  Go me!  Finally it was time for some dinner which was easy because it was leftovers! 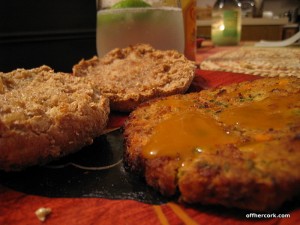 First up on the side I had a Morningstar Asian veggie patty that I just toasted up in the toaster oven.  I was lazy and didn’t want to pull out a skillet.  However, the toaster oven is a poor substitute because it doesn’t leave things crispy crunchy, just heated through.  It still tasted good though!  It was topped with chili garlic hot sauce.  On the side was an Ezekiel English muffin which oh my goodness I just love love love!  Ezek bread has totally won my heart.  The muffin had a smidge of butter on it. 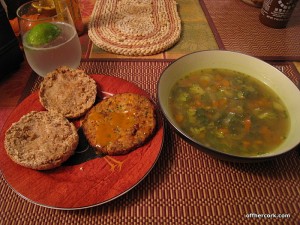 And of course the leftover soup which tasted loads better the second time around.  Mmmm yummy dinner!

After dinner, I changed into my jammies and we sat down to watch the hockey game.  It was horrible, let’s not discuss it.  I made some tea and sipped on that while watching the game.  And then it was another 10pm bedtime crash out for me.

I hope to be able to post today’s eats today!  I got a huge batch of new tapes in but I’m going to try and plan everything out so I will have time to post again.