Hi gang! So sorry about yesterday but I got work in and worked my butt off last night.  My babies is sick and so I was taking care of him as well.

Monday night SF class was awesome because we got to spar.  Not too hard because we didn’t headgear and I didn’t have my mouth piece with me, but enough that I was able to get out a lot of frustration.  Hitting things is fun!  You should totally try it!

And let’s be honest it’s a lot cheaper than therapy.

After class I totally crashed in bed.

I was up bright and early yesterday to get my run on.  Four miles, oh yeah!  Ever have one of those runs where you think you are busting it out hardcore only to see that your HR was not up much and you were maybe faster by like a minute?  That was my run yesterday.  It was an awesome run and I completely felt like I was going fast and kicking some booty.  Nope.  Dang!  Ah well I felt good after it! :p

I showered and stretched really well, then I made some new oats! 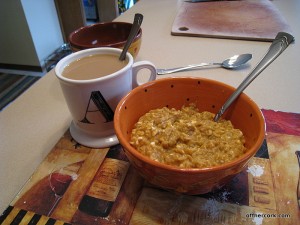 I saw some other bloggers put cottage cheese in their oats and decided to give that a try.  Now here’s the thing, I actually hate cottage cheese.  The texture of it grosses me out and well the taste is not a pleasant tang like yogurt, it’s a tang like something done went and died.  However I do like it when it’s cooked into things.  Then it’s yummy!  I added it to my oats for some extra bump and protein.  I usually add whey powder in for extra protein so I omitted that this time.  These oats were heaven!  You can’t taste the cottage cheese at all, it just made the oats creamy and rich.  Totally awesome!  And Scott loved them and was a bit taken back when I told him it was cottage cheese.  Wheee!

After breakfast Rocky and hightailed out for a quick walk so I could get back and started on some work.  There is where I proceeded to work and do laundry all day long.  Except for a few breaks to eat! 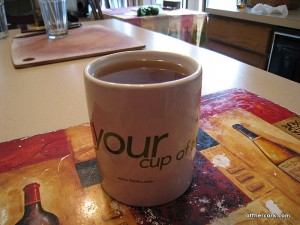 I had some tea after the walk.  Mmm holiday spice!

Scott informed me that he was going back to bed after lunch and this is when I knew he was seriously feeling like butt.  My mom was sick when she was here, so I’m sure that combined with his way too many late nights and way too many work stresses, finally caught up with him.  I made him a big bowl of ninja stars (think Os but only stars, Annie’s brand) and sent my man to bed.  I also have him taking some Emergen-C as well.  I don’t have a cute little nurse maid’s outfit though.  Perhaps I should look into getting one?  I tried to get him to let me take his temperature but he wouldn’t bend over for nothing. 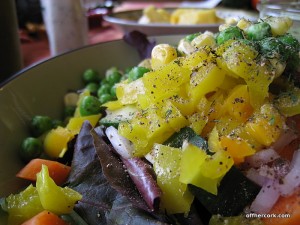 Topped with a small amount of yogurt Ranch dressing. 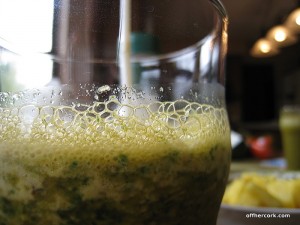 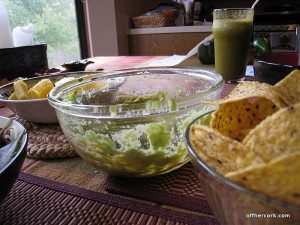 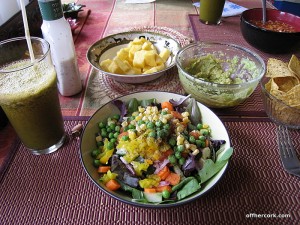 Twas a good lunch!  Then it was back to work.  It was lunch time when I decided that Scott didn’t need to be going to MT and using up energy.  Knowing that we had more time this evening, I worked all evening while he was sleeping and then I got up to make us a late dinner.

Easy peasy Asian inspired soup. Scott’s version had a ton of udon noodles in it.  It’s all about his comfort foods until he gets better.

While I was cooking I snacked: 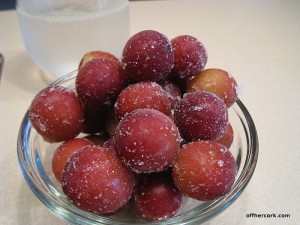 On the last of my frozen grapes.  I wonder if I can tolerate the cold enough to make more? Hrm…. 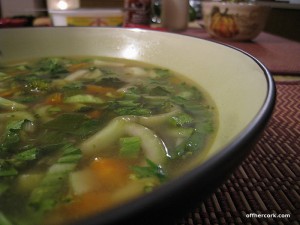 Seasoned with curry, soy sauce, and a bit of sesame oil.  I had some multigrain bread with butter to go with my soup. 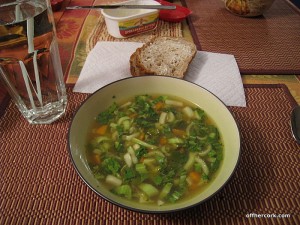 It was so good and I have  a feeling that leftovers are going to be even better! 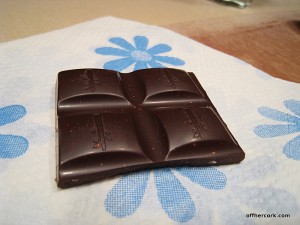 While we watched TV, I had two out of four dark chocolate squares.  Dark chocolate with hazelnut toffee.  Couldn’t really taste the toffee too much but the chocolate was good.  By 10pm it was over and out and I went to bed.