Today has been all about fall flavors here at the HQ!  I love indulging in fall flavors with lots of pumpkin, apple, and cranberry going on.  Mmmm!

Last night’s “junk” food was delicious but oh guys it left me so bloated feeling afterwards.  :o  All the salt from the pizzas and fries caught up to me.  Goodness!  I was slamming glasses of water while we watched some hockey.  Almost caught up, last period left to go in last night’s game.  I hit the hay early too.  I was actually starting to pass out around 9pm. :p  But powered through until a little bit after 10pm and then I had to call it quits.  I crashed it out and bed and slept soundly, ready for my run this morning.

Where I busted out 6 miles!  Booyah!  And then wrote a little message to Scott: 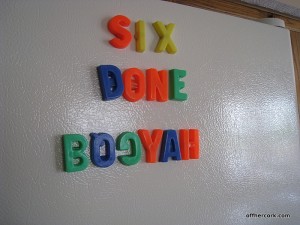 This is in response to his message to me this morning which said, “Have fun run!”.  Do we not just love him or what?

My pace was a little slower this morning at 10:30min/mile but I can dig on that.  My right ham is a little tight but not overly so.  I’m going to stick with six for a while and also start my physical therapy exercises up again at least once a week to work the hamstrings and get them back in order.  Adding miles and running long distances come winter is what will prove challenging I think.  Running in the cold for 4 miles is no big deal but more than that when the temps are in the teens might be a bit hard. Eeep! 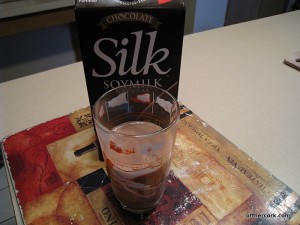 I had a nice glass of CS and took Rocky out for a short walk.  I was freezing cold so I had to hurry back home.  Being sweaty and going out in the chilly morning air doesn’t work I guess. :p  In my defense I do put on more layers for his walk but that is not cutting it.

I stretched really well and then showered and tossed on my comfy robe.  Time to refuel! 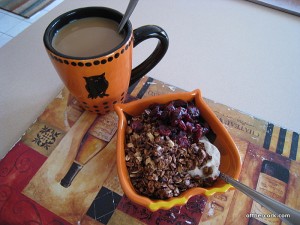 Lately Scott and I have been using 2% organic milk + some cane sugar in our coffee in the mornings.  We ran out of creamer and had the milk on hand so used that.  We made a quick stop at the store yesterday and a 1/2 gallon of Meijer organic milk was the same price as a small bottle of Meijer organic creamer. :WTF:

So yeah, we just got the milk instead.  Stretch that buck, right?

Then I chilled it on the couch for a bit while sipping my coffee and eating breakfast.  Eventually I headed over to the kitchen for some dinner prep and to get started on Sunday Breakfast!

New things to try out today!  For Sunday Breakfast we had: 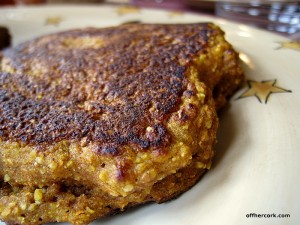 Cider Pumpkin pancakes.  I made these with spelt flour which is new to me.  My first time using it and I have to say I’m pretty pleased with the results.  These pancakes also had cornmeal as well which is why they looked textured. 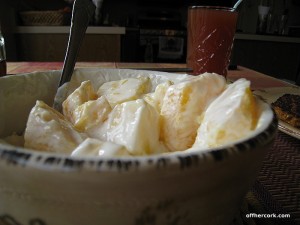 Fruit salad, and more yogurt for me!  Pineapple and orange slices in Oikos vanilla yogurt. 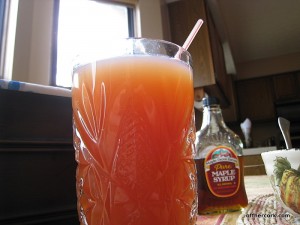 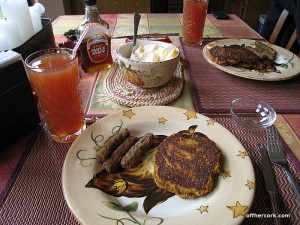 And also some new chicken sausage.  No close up because sometimes a sausage in your face doesn’t look so edible even if it totally is!  These sausages were weird and I probably would not buy them again.  I’ll do a review on them for ya.

After breakfast, I did kitchen clean up and a little more prep work.  Scott headed out to mow our beast of a lawn.  Him having a bit of free time and it not raining outside have finally coincided so he was able to mow.  I worked on my Chocolate Zucchini Bread post.

My bellah eventually started rumbling and Rocky was prancing around (i.e. up my butt) wondering where his dinner was.  I fed him and then pulled the chicken out of it’s brine.  I also had a wee snack. 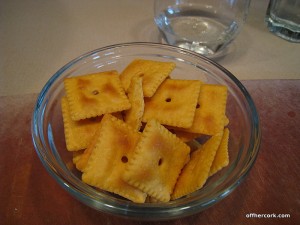 Occasionally in the huge box of Rocky’s chicken backs, we’ll find chicken legs which is just more chicken for us.

We found one yesterday and Scott said he wanted some roast chicken.

No problem my love! 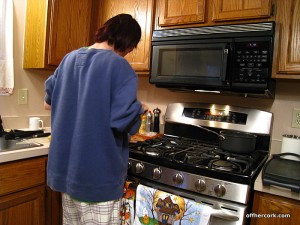 Why do I always look like I’m 8 feet tall compared to my kitchen?  Goodness!  Don’t be jealous of my flannel jammie pants now.

I had some other chicken legs in the freezer so I used those in addition to the stowaway chicken leg from yesterday.  Cider and cranberry juice brined chicken legs roasted in the oven with some root veggies. 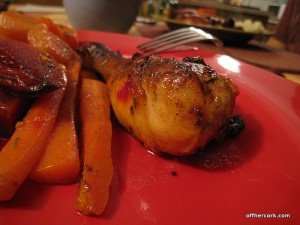 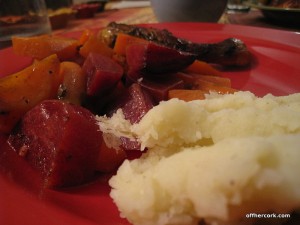 Mashed potatoes with the roasted veggies which were golden beets, regular beets, and carrots.  With onion and garlic thrown in for flavor and mushrooms tossed in for Scott. 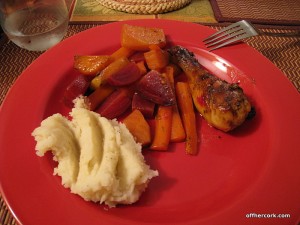 Dinner was fabbo and smelled so good as it was cooking!  I stuck with traditional seasonings for the chicken, poultry, rosemary, garlic and things along those lines.  Mmm mmmm!

I made a fall inspired drink for Scott while dinner was cooking.

Spiced rum + apple cider + cranberry juice.  I had a sip for quality control and it was really tasty!  I have another fall drink in mind for him for some other night as well.  Whee!

Now I’m off to finish last night’s game and hang with my boys.  There is wine in my future!  I bought some pumpkin ice cream from Jeni’s (local ice cream shop) but dang, all this chocolate zucchini bread talk has me wanting that instead! :p