Hi gang!  I know I promised you two posts yesterday but well time got away from me. Oy! Let’s just recap it.

If you know anything about me, you know I thought briefly of running a light run yesterday morning, but my bod was all, “Hell no” and so I listened.  I got up at 8am and started a glorious morning.  After taking care of Rocks it was time to pray to the Pumpkin Gods for some Pumpkin Power!  RAWR! 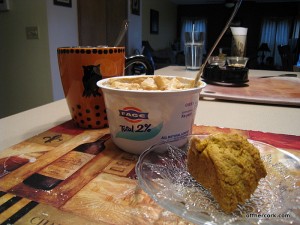 If you know anything about me, you know that Fridays indeed call for Pumpkin Latte love at least.  Also in attendance, pumpkin yogurt with apple, and 1/2 a pumpkin scone.  Oh yeah!  Don’t forget to say your peasandthankyou to Mama Pea for coming up with the Pumpkin Latte idea!

I made a big batch:

All blended till foamy goodness.  I decided we could add in our own sugar amount so skipped that part for the big batch.  I mixed some scoops of pumpkin with the yogurt and added the same spices minus the vanilla, and a honey crisp.  Mix and eat out of container like a savage.  And then 1/2 a pumpkin scone from TehKu.

Today was going to be a busy one and I wanted to make sure I was properly fueled for it.  Plus, if you saw yesterday’s post, you know breakfast items are basically nonexistent at the moment.  Scarah times up in here!

After breakfast I got dressed, cleaned a little bit around the house, did some more online stuffs and then it was time for lunchie.  If you know anything about me, you know I blew through that breakfast in no time flat.

If you know anything about me, you’ll know what’s up for lunch. 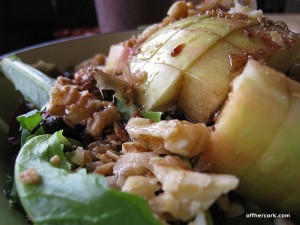 Topped with balsamic and oil. 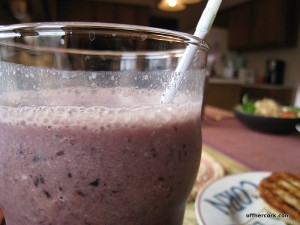 If you know anything about me, you know there was leftover pumpkin latte mix for smoothies!

Scott wasn’t digging on the smoothie too much today but I liked it. 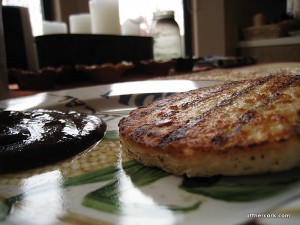 Morningstar grilled chick’n patty with BBQ sauce.  If you know anything about me, you know I squealed with delight when I started eating this. 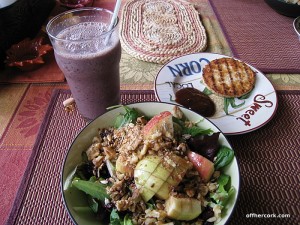 I plowed my way through lunch taking out anything in my path, including extra smoothie!  I didn’t finish it all, but since Scott was being such a wimp I drank some of his extra portion.

After lunch I hit up the mall to see if I could find some more clothes and what not.  If you know anything about me, you know it’s been ages since I’ve “shopped” at a mall.  It was horrible.  Each store was crazy white sterile rooms with ridiculous music assaulting you as soon as you walked in.  I found nothing.  It’s winter so why is everything short sleeves and see-through?  I made my way over to Forever 21 as a last stop and finally scored some finds.  A few shirts, tanks for $2.50, and two jackets.  Plus a really cute but gaudy gold color, owl necklace.  If you know anything about me, you know I love owls.

Once back home I modeled all my new finds for the fellas and then changed into jammies.  I totally forgot we had plans to go to the grocery store after feeding Rocks dinner.  If you know anything about me, you’ll know that a ton of swearing occurred as I remembered that fact.  Then I promptly decided I did not want to go.

Dinner had been on the menu plan for weeks and last night I finally decided to make it.  The only downside being I didn’t have quite as much mango as I anticipated.  Not too long ago I got a spicy black bean and mango soup from WF and that was what inspired last night’s dinner. 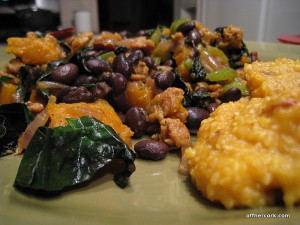 All sauteed up in one pan and just stirred together for gloriousness.

On the side of that was pumpkin chipotle polenta with pepperjack cheese just for added kick. 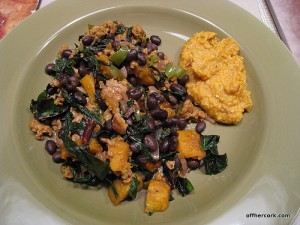 I only had a small amount of polenta because it was super spicy but also because I was more interested in the mess.  In fact I had I think two bites of polenta before just forgetting about it and concentrating on the other dish.  Which was really good!  Could have used another spice, but otherwise tasty.

If you know anything about me, then you’ll know we ate dinner while watching the Pens game last night.  They were in town playing Cbus’s poor excuse for a hockey team, the Blue Jackets.  We actually wanted to go to the game but super nose-bleed tickets were like over 70 bucks.  Yikes!  While I was at the mall I stopped in a “sports” store to check out jerseys.  They were selling some sort of cheap-o knit jersey that apparently their grandma’s made and trying to tell me they were $150.

I don’t think so.  My official real deal Pens jersey I have didn’t even cost me that much.  Perhaps they didn’t think I know anything about anything.  Pfffttt.

If you know anything about me, you’ll know that I saved room for a snack-poo. 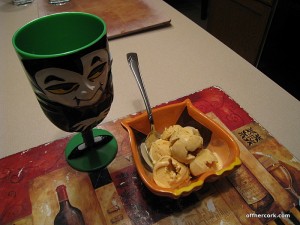 I had my snack while the Pens schooled the Jackets on how to play a full 60 minutes of hockey and then some.  Then I watched Venture Bros. and if you know anything about me, you’ll know I laughed my ass off.

But here might be some things you don’t know about me!  I got an award from Lauren! 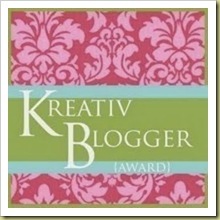 1. I do not have my ears pierced and have no desire to have more holes in my head thankyou.

2. I had my belly button pierced for a long time. Technically a belly button isn’t a “hole” so there was no issue.

3. I want a tattoo very badly but trusting someone with that is a big step.

4. I was a late bloomer, and my wisdom teeth didn’t start to emerge until I was in my late twenties.

5. I’m too much of a wussy to get them removed. Again, it’s a trust issue. I don’t want to come home all slack-jawed because some joker nicked a nerve.

6. I didn’t attend my college graduation. i was done with school on Tuesday, graduation was on Saturday. I wasn’t sticking around that long! I had a hot man and a new apartment waiting for me.

7. If I could have, I would have skipped out on high school graduation too.  Joke! But I went for my parents and because we weren’t allowed to skip.

There are way too many bloggies that I adore, so picking some for this award would be way too hard.  However, I would love it if,you either shared with me some little factoid or if you did this on your blogs as well!