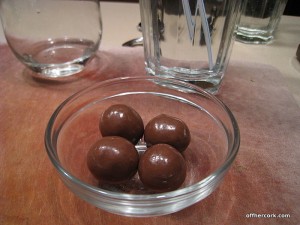 Malt balls!  And I only had one which left me feeling totally uneven and unbalanced once it was all over.  We watched DWTS, Monday’s episode and I have to say those that did the jitterbug were lacking.  I expected so much more out of them!  Admittedly Donny Osmond did bring it to the table but everyone else, BLAH!  Nothing.

At 10pm I went up to bed thinking I was just going to read for a bit because I didn’t feel tired, but I totally crashed out hard.  The rain actually woke me up a few hours later, it was coming down crazah!  Goodness!  Like I haven’t heard rain like that in quite some time.  I got up early this morning and immediately got started on work.  I thought for sure if I pushed through, I could finish my current tape and bust out another one all before I had to wake Scott up for breakfast.

I didn’t finish the first one until it was time to wake Scott up.  Man that was like the tape that just would not end.  I kept thinking for sure I only had 5 minutes left but nope, it crawled!

It made me super cranky.

I started a batch of oatbran and realized this would be the last batch until I hit the grocery store.

Me: Wakey wakey loves! (Actually how I wake him up is by jumping on top of him and smothering him with smooches (on his cheeks because I do not dig on morning breath, thanks), but that takes a long time to type out. And it’s major sappy.)

Me: Listen we have a crisis.

Me: This is the last batch of oatbran I can make.  We are out AND we are still out of oats.

Nothing resulted from that conversation though, we are still out of oats and oatbran. 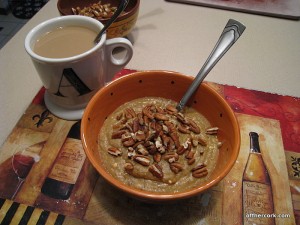 Pumpkin cheesecake oatbran, minus the banana because yes, the HQ is still out of bananas.  How we are even at a functioning level, I do not know.  Perhaps it’s the added pecans to things?

After breakfast, I worked a little more and then took Rock of Love out for his walk.  It was quick because rain was immenient.  When we got back I busted my hiney getting my last tape done and over with.  That took me till about 2pm and then Scott started looking over in my direction asking if I was going to eat lunch.

Translation: What he really wanted to know was if I was going to make him lunch.

It was late in the afternoon so a light easy lunch it was. 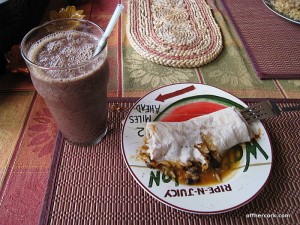 Amy’s burritos and a smoothie:

The burrito was alright, it was warm and I was cold so it filled a need for the moment.  After “lunch”, I cleaned up the kitchen and got busy tackling other tasks that were other work related.

Result, it definitely was not an issue.  Done.  Over and out and I am not working anymore today.  Pfffttttt! 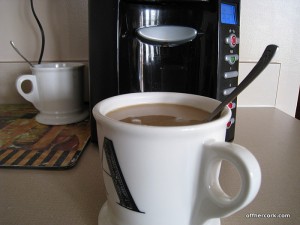 Somewhere around all of this, I had a cup of decaf coffee which was totally lame, sort of like lunch.  First of all, decaf is just not right to begin with, but caffeine for me at that point would have been a huge mistake.  And second of all, the coffee was so weak and icky!  It was like drinking a mug of warm water.  Ew indeed.

Here’s the scoop with din, I at this time am not hungry.  I don’t know if I’ll eat something before SF class tonight or not, it’s a toss up.  If I do, y’all will see it in all it’s glory tomorrow.

Right now, I am so over typing for the day.  I’m off to read and then hit class, and then hit bed to sleep well in prep for my day off tomorrow and the start of my vacation.