Hey gang!  Before heading off to the wedding, there was a snack! 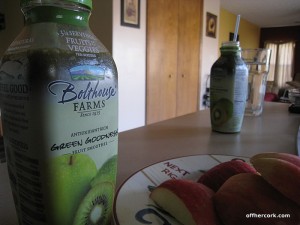 A Bolthouse green goodness smoothie and a honey crisp.  Mmm fill my bellah!  I sipped and munched while I got dressed.  I thought for sure we were going to be late but ended up right on time!  The ceremony was lovely and the reception was small and intimate creating such a warm welcoming atmosphere.  Sadly it was so dark in there that I couldn’t get pics of any food!  They came out really bad and I wasn’t about to use flash.  I will tell you what I had though. 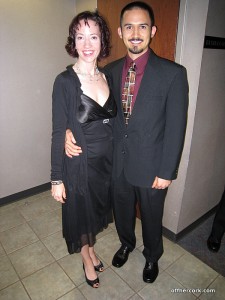 First you must bask in our hawtness!  Rawr!  You can see I went with the first dress.  I asked on Twitter whether people wear hose or not and the majority of responses were a firm no.  I had originally picked up a pair of hose at Kohl’s because I didn’t have any at home but somehow this pair of hose never made it out of the store.  We didn’t even buy them but I’m not sure what happened to them.  The last thing I wanted to do on Sunday was make a quick run to Target for more hose.  No thank you.  I went sans and it all worked out well.

Now eats!  To nibble on, a small bowl of chex mix with a glass of Cabernet.  Salads were served which were iceberg lettuce, some shredded carrot, red onion, cranberries and I think goat cheese, but I’m not positive.  The dressing was honey mustard which I drizzled a little bit on.  The main entree was green beans and roasted potatoes for me.  There was also a beef or chicken option (chicken had cheese and bacon on top), both of which I declined.  Scott had the chicken and said it was alright.  Then I picked some extra green beans off his plate.  I’m not sure what the cake was because I did not have any of that either.  Looking at Scott’s plate last night it seemed to be a chocolate and white combo.  There were Buckeye favors at the table and I ate one of those.  Buckeyes are just like a homemade Reese’s cup, milk chocolate and peanut butter. 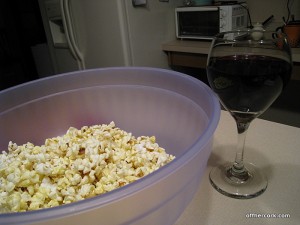 All of us more senior guests peaced out around 10pm.  It was Sunday and we were all passing out! :p  I was still a bit “hungry” when we got back home, so I had a glass of red and some popcorn.  I kept the “fun” theme going.  I had some chex mix and now some popcorn, both of which I rarely have so what the hell right?

I went to bed way too late!  This is what happens when I stay up to watch a hockey game, jeesh!  It was 12:30 when I hit the hay.  I know!  All desire to get up early this AM were long gone.  I slept until 8am and immediately felt like crap as soon as I got up.

So much so, that I debated going back to bed after feeding, watering, and potty-ing the Rocks.

I stayed up and just sat at the computer for a minute trying to get my bearings and see how I felt.  Around 9am, I woke up Scotts and made some breakfast.  My appetite was a bit off which is never a good thing for a foodie.  I didn’t want anything too heavy but did want something substantial. 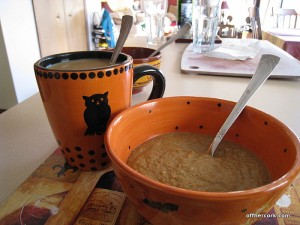 I had some coffee and pumpkin oatbran with no banana because I’m out. Boo!  The oatbran was fine, the coffee was not.  I had about maybe two sips before passing it off to Scott.  It was not sitting in the tum very nicely.  After breakfast I took Rocky out for a walk which helped a bit.  The day was a beautiful one with clear skies, sun, and just a touch on the cool side. 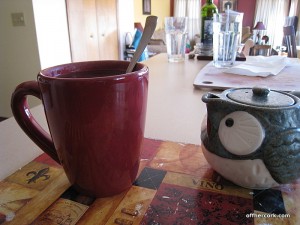 I made some tea when we got back home, My Apple Pie blend from TehKu.  Awesome!  I added a touch of honey and figured that the chamomile component of the tea would help with any ills.

I did a bit of work and then moved into the kitchen for some lunch.  Easy, comforting, and fortifying is what I was looking for. 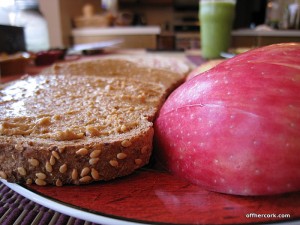 Two slices of Ezek bread with PB and honey, along with a slice honey crisp apple.  Thank Jeebus for Ezek bread, love it! 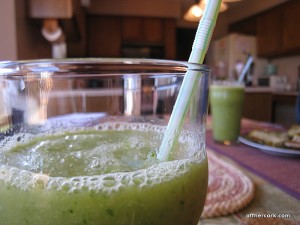 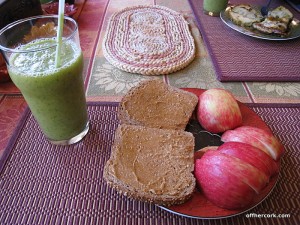 After lunch, I went right up to bed and took a nap for the rest of the day.

I know!  I never nap anymore.  It throws off my sleep schedule and I always feel worse when I wake up.  Today I just had to have one though and the down time was awesome.  I felt better, not 100% but better when I woke up.

I worked for a bit and then started making dinner. 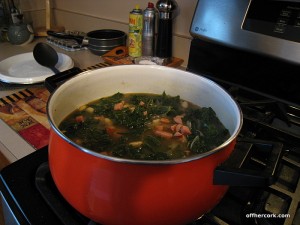 I busted out my grandma’s old pot and got soup started.  White bean and kale soup is by far my favorite and makes me feel so much better.  And when you don’t feel well, really is there anything better than a lovely bowl of soup? 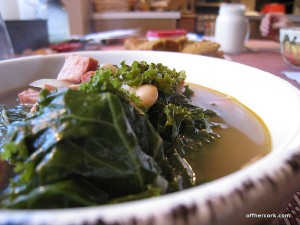 I added in some kielbasa this time around to give some extra smokey flavor.  I ate around it though, it was mostly for Scott’s sake.  Kielbasa was just a bit too heavy for me today. 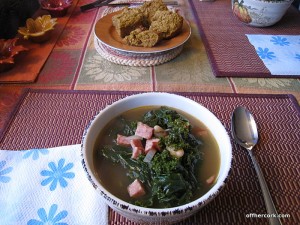 I also made some pumpkin cornbread to go with the soup.  I totally kicked that big huge bowl too!

Now I’m off to make more tea and to actually get in bed and read for a bit.  My goal is an early bedtime with an early wakeup call so I can get caught up on the work I had to put aside today.