Hi gang!  Let’s get something out of the way first. 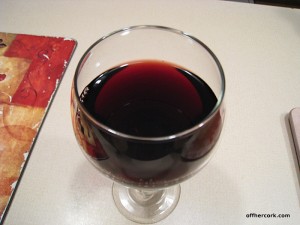 I had a glass of red wine and a small handful of dark chocolate chips last night while watching Wednesday’s hockey game.  It had a rough start but finished nicely.  The hockey game I mean.

Now that that’s out of the way, let’s talk today!  Today has been full of crazy inappropriate things; my head is swirling.  No worries, I’ll highlight the inappropriate for you so you can follow along at home.

Six am rolled around and my kid was huffing and puffing to get up.  At eight years old, I expected more mature behavior out of him.  Demanding things and throwing tantrums is not allowed in this house unless said behavior is being exhibited by me.  I ignored him till 7am, and then I finally dragged my hiney out of bed.  I fed, watered, and pottied the kid, then I made myself some breakfast. 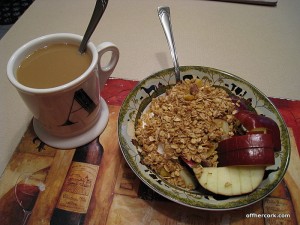 I do not have enough oats in the house to make my own granola so I have to resort to store bought. Store bought just does not cut it for me anymore (chocolate granola is the exception here) and this yogurt mess was very disappointing.

First of all, why do I not have enough oats in this house?!  Inappropriate!

Scott and I missed MT again today because we are just swamped with errands.  We have so many things that need to get done either for stuff this month or in preparation for my trip.  Missing so much class is never appropriate.  It also bums me out.

Our first and only stop today was to Target where I purchased a coffee. 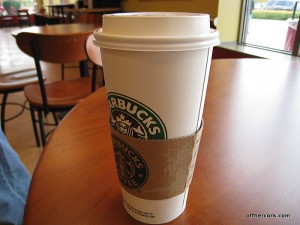 I had a gift card, so this was free.  Score!  Venti pumpkin spice latte with soy milk, no whipped cream, no foam.  Venti because Scott wanted to split it. This meant he had to hang around with me while I browsed so we could “share” the drink.  Not how I envisioned the shopping trip going.  I tried looking up the ingredients for the pumpkin spice syrup that Starbucks uses but could not find the list anywhere. I was curious to see if it was made with HFCS because I would avoid it if it is.  Since I couldn’t find it, I just decided to hope for the best.  I have Starbucks maybe once a year so whatever.  But having ingredient lists available is a good thing Starbucks, get on that!

I found some really cute things at Target today.  I’m trying to get my “foundation” wardrobe; you know, the basics of things.  Then I’m going to build off of that and finally have a cute wardrobe with comfy fashionable clothes.  One thing I bought today was a pair of bell-bottom jeans on clearance. I don’t care if the fashion industry calls them “flair” legs now, they are bell-bottoms.

And while I may have been born in the 70s, bell-bottoms are never appropriate clothing items.  However, these are so comfy it’s ridiculous and they make my butt look cute, which is always appropriate.

A side note: Target has some cutie Halloween jammie Ts for $5, they are over in the workout clothes area.  Check ’em out!

A few more pants, jammie bottoms, and sweaters later, I realized that I ate up way too much time looking at and trying on clothes.  This stressed me out a bit because it meant that the other items on our to-do list for today weren’t going to get done!  GAH!  We picked up some household items (curtains) and headed back home.

I made us a super quick lunch so we could move on to other things. 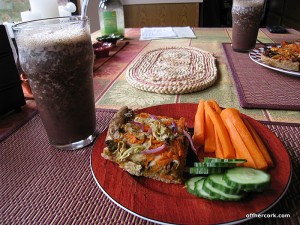 Carrots, cucumber, and a leftover pizza slice that I ate cold.  So so good!

After lunch, we headed upstairs where I modeled my new jeans and Scott admired my ass, said they looked nice.  Then I cut his hair and helped him get ready for a bachelor party he was going to tonight.

Where he is to provide social conversation and be a designated driver.  I at least know he looks good.

This meant I was left to my own devices for the evening.  Oh how would I spend all this free time?

Starting off by stuffing my face.  I needed some dinner! 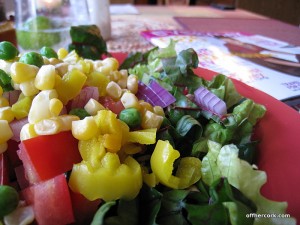 This is totally inappropriate behavior.  I should be having some fabbo single-girl dinner like bistro salad, some goat cheese fritters, and a wine spritzer.  However, what I realized is that what I really want out of life is a awesome Huz who can keep me well supplied with Jass fixin’s.  I’ve got that, so I guess I’m doing alright. 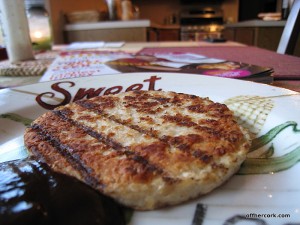 A Morningstar grilled chick’n patty with some BBQ sauce tossed to the side like last night’s panties. 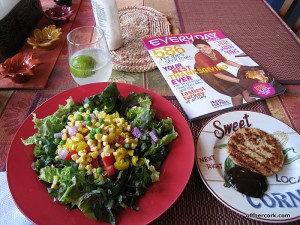 I had dinner with Rachael Ray, which is totally out of line because I’m mad at her.  After about a year, she started getting way too aggressive with our friendship, demanding attention and such.  She also kept trying to turn everything into a “burger”.  I pointed these out to her, which she yelled at me and said I was out of line.  Then she said something about making my pumpkin oats into burgers.  I told her if she even thinks of coming near my oats, there will be a throwdown the likes of which even Bobbie Flay wouldn’t be able to help her. 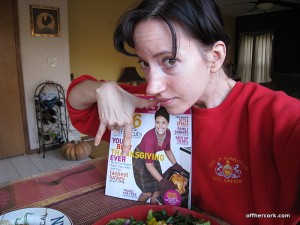 Bring it Rachael Ray!  Ya Ya YiEEE!

After dinner I did the exciting task of dishes and then….

I cleaned the house.  With the boy gone, I didn’t have to worry about anyone bugging me about, “Can I use the bathroom yet?”  Or just dancing around like all of the sudden he’s channeling his inner Savion Glover.

Then I decided to make some veggie brownies but realized I do not have enough chocolate powder to make brownies!  Do I even really need to highlight that statement?

I am now finally doing something totally wild and risque.  It’s about time right?

I’m hanging out with one honkin’ stud, and we’re kicking it with a personal entertainment device between us. 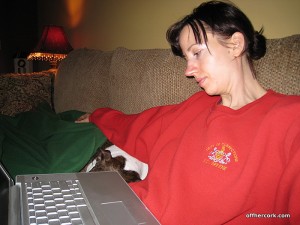 Nite my pretties!  I need to get more of my inappropriate on!