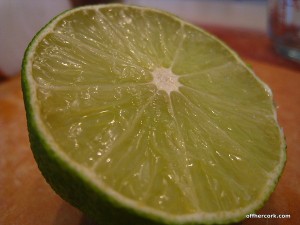 Our house came with a garage disposal.  Brand new! Just updated! Said the little flyer talking about all the great features of this house.

We don’t really consider a garbage disposal a great feature.  We don’t use it and in fact I’ve cursed it more than I’ve praised it.  It’s annoying.  It clogs very easily, causing dishwater to back up in my sink.  It drains slowly.  The only way to alleviate these frustrations is to run the disposal.

Garbage disposals are loud.  Not only does the sound assault my ears, but goodness it makes my whole sink shake and my faucet suddenly turns into something going through stage one detox.

But as frustrating as those things are, the thing that irritates me the most about this stupid disposal is that it will start to smell.

Stupid disposal!  Do people really toss food down their kitchen sink?  I suppose so since that is the point behind the disposal’s whole existence.

One way I’ve found to combat this is to toss in my leftover citrus remains.  We go through a lot of limes at the HQ so that is what normally deodorizes the disposal.  In the winter our orange intake increases and the disposal sees orange peels as well.

The essential oils in the peels help clean and deodorize the disposal.  If the smell is particularly potent because the disposal just happens to be angry for whatever reason, I’ll toss in some baking soda with the peels.  Toss in the peels, run cold water, and run your disposal until it stops making grinding noises.  Turn off the disposal and run cold water for another second and then you’re done.  Disposal is clean and the smell of fresh lime or orange or whatever you used will waft up from the sink.

Peels can be frozen and used later too!

Another use for peels — I personally really like orange but feel free to use what floats your boat. — is to toss them in a pot with some water, cinnamon, and cloves then heat it up.  Let it boil for a few minutes and then simmer for another little while.  Instant room deodorizer and air freshener.  Plus it’s cheap!  And once you’re done, that whole mess can clean your stupid garbage disposal if you’re unlucky enough to have one.

Of course if you don’t have a disposal, the peels can go in the compost pile!