Hi guys!  Sorry for disappearing yesterday but I didn’t get a chance to start on my post at all and then by the time we were done with dinner it was 8:30.  I was very close to going to bed so I decided to wait until today to catch you up! 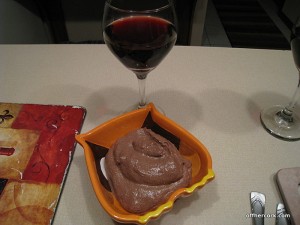 Red wine and some vegan chocolate pudding (Scott and I split the bowl)!  YUMMY!  I’m still fiddling around with the recipe so give me just a few more times.

Friday started off with some coffee and very lame oats. 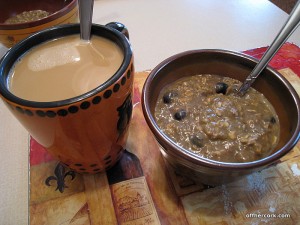 Okay, well I guess they weren’t that lame but no banana and our WF grocery items are getting desperate.  I made pumpkin oats with blueberries.  Veggies and fruit in one breakfast, bam!  It was a gross color because the blue from the blueberries turned the orange pumpkin into some sludge looking stuff.  And the coffee was just so-so.

After breakfast it was time to run my little man to the doctor for his yearly check-up.  He’s a senior now *sniffsniff* and that means he gets more testing done to him.  He was a champ!  And he came away with a clean bill of health.  After the visit I was going to take him for a walk and all that but he said, “No way mom!”  And went to bed to crash out for the rest of the day. :p  He gets stressed really easily but doesn’t freak out, which is good.  And then once it’s over, he’s zonked.

I cleaned the house and then made us some lunch.  A little different.  I was in the mood for a nice salad with a twist, so that’s what I made! 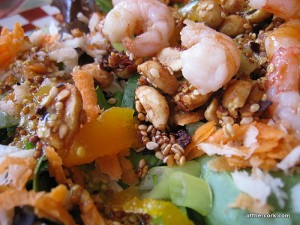 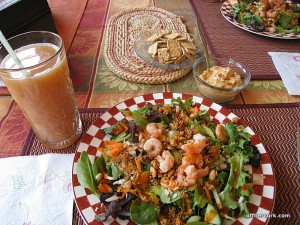 And no smoothie!  I honestly didn’t feel like dragging my blender out.  I did have some juice though, OJ+Cranberry+Seltzer.  And some kashi crackers with hummus. 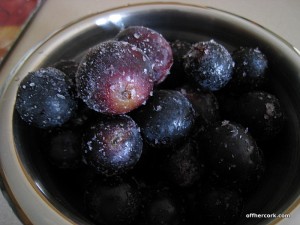 Once the kitchen was cleaned up, I had a bowl of frozen grapes and headed into the office.  For a work project that’s coming up, I have to go through this “training” program required by a University.  It actually is very silly as it has nothing to do with me and transcription.  But in order for me to transcribe these documents, I have to take the same training the researchers did.  Weird right?  It’s taking forever!  I’m just about half way through.

Then I stopped for the day and whined about what to do for dinner.  Part of me wanted to go out only because I was tired and lazy and didn’t feel like doing anything.  And the other part of my wanted to stay home and just make something easy. 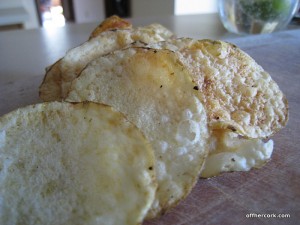 I snacked on some baked chips while Scott and I discussed it.  After much dramatic decision making on my part, I finally decided to make some soup.  Comforting, easy, and we haven’t had any for a while. 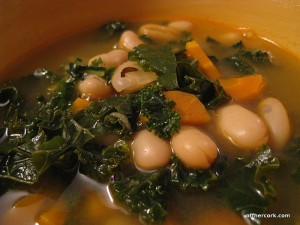 Kale and white bean soup with onions and carrots.  YUM!  So flipping delish and I love kale.  Since I didn’t have any in my smoothie, this was perfect. I think a lot of people have this misconception that soup takes all day long to make.  It doesn’t! Soups are so easy and quick, they are perfect for fast meals.  And you can toss anything in them!  Whatever you have on hand can go in. 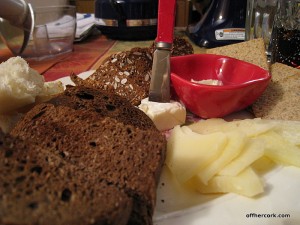 I also made us  a mini snack plate to go with the soup.  Breads and crackers with cheese and butter (for the bread if wanted).  The cheese was sliced asiago and manchego. 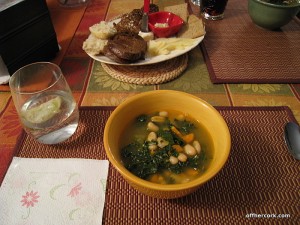 PERFECT!  I have these Raincoast Crisp crackers that I just love.  If you like crackers give them a try, they are so good.  One of the cheeses on there was a laughing cow light french onion triangle.  I had a small bit and I have to say, this pretty much confirmed that I don’t dig on laughing cow.  I used to like it but not anymore.  It doesn’t have any flavor for me.  And if I’m going to have cheese, then I want some wow factor, you know?  It sort of shows me that better cheese equals better results.  When you buy really good high quality cheese, it doesn’t take much to flavor something and even just eating it, you don’t need as much because you’re getting such a punch from it.  Mmmm cheese!

I sat on the couch with a glass of red and some dark chocolate. 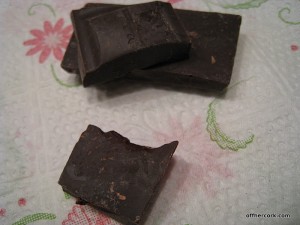 This was some dark chocolate I got from World Market and I have to say it’s awesome.  I had 1.5 squares and was happy happy.

Then I headed off to bed and was asleep before 10:30.  I can rock a Friday night like no one’s business!