Gang I am going to fly through this post because I want to sit with my boys for a sec before having to crash it in bed.

It’s been a busy long day!

First things first, this girl went for a run!  It was raining when I got up this morning so I putzed around responding to emails giving the weather a chance to decide if it was going to stop or keep raining.  I was seriously considering running the rain because I needed a run today.  My soul was begging for it!

Eventually it stopped raining and I was able to head out before 7am and start my run.  I initially wanted to do 5 miles today but my hammy was getting tight on me so I did 4.6 instead.  It was crazy humid outside, my hair was soaking wet by the time I was done.  Ew!  I felt good about my run though!  My pace was decent, my HR was up, and I was a sweating beast, all conditions for a great workout. 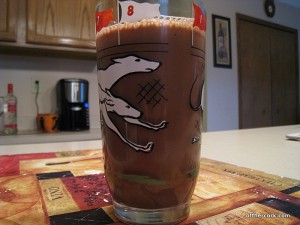 I slammed a huge glass of CS and then back out with Rocky-love.  We busted out his walk and I came home to a stretch and shower.  I woke up Scott and practically sprinted downstairs for coffee and breakfast. 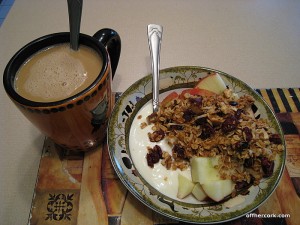 We finally have some apples up in this house!  So I had a yogurt mess with Stoneyfield, a honeycrisp, and some homemade granola.  Oh it was so so fine!

After breakfast I made another batch of chocolate zucchini bread but turned this batch into muffins.

I KNOW!  Crazy good!  I wanted to have something on hand my mom could grab for breakfast if she wanted.  Plus it gave me a chance to give my recipe a second try to make sure it works.  I’m pretty sure it’s a go.

Then we had lunch!  Slim pickings around here: 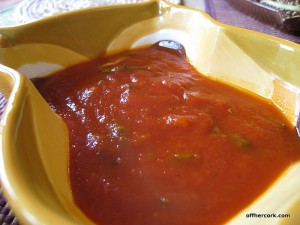 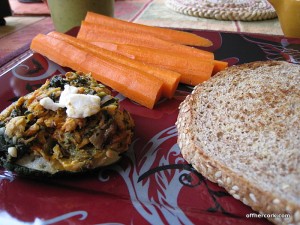 Carrot sticks, a slice of Ezekiel bread, and the last 1/4 of salmon stuffed zucchini. 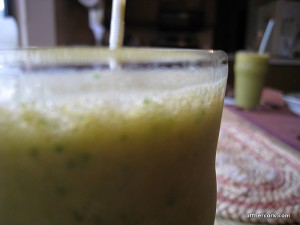 Pumpkin Pie Smoothie.  To die for!

Blend, blend, blend.  Not as orangey as I expected but so tasty it was crazy.  Thick and rich like a milk shake! 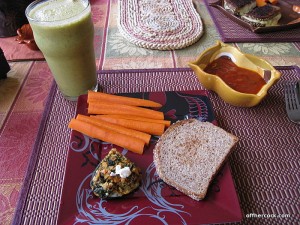 The smoothie was easily the best part of lunch.

After lunch I cleaned the house.  And then it was time for more grocery shopping, this time three different stores. I hate having to run around to so many different places but not one place has everything unfortunately.

Before heading out, some fuel. 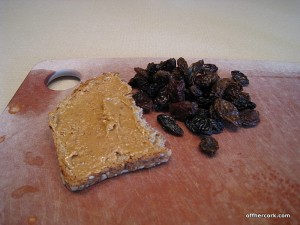 I only had 1/2 the slice of bread at lunch, so for my snack I had the other half with some PB, and raisins on the side.  No way I would have made it shopping, I needed some food!

First stop was Sam’s for a few things.  Then over to Meijer for produce and the rest of my stuff.  Thankfully they are right next door to each other!  After Meijer we came home, unloaded everything and then back out to Whole Foods.

I am stocked up and so help me I don’t want to see the inside of a grocery store for a while!

We picked up dinner at Whole Foods! 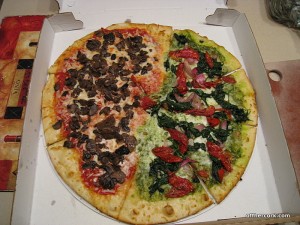 Pizza Wednesday!  Spontaneous! :p  Since my mom will be here tomorrow I have no idea what we’re doing for dinner yet, so I figured we might as well have pizza tonight.  Plus it gave me the night off since we were running around so much and it was late. 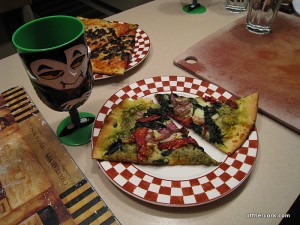 So so good!  And a glass of wine to go with the pizza.  Mmmm mmmm

Now I’m off to chill it with my boys then to bed because have an early day tomorrow!