Hi gang!  Last night after SF this sister crashed it in bed!  I almost made some banana soft serve but decided that bed sounded much more appealing so I diverted myself into the bedroom.  I got up at 6am this morning to get started on my day and bust out a run!  I ran 4 miles this morning and lordy was it humid out.  Gah!  I had to bust out the running shorts and t-shirt again.  I was a sweating fool!

I don’t know if it’s a sign of fall or just because it was a bit overcast today but the sun took longer to poke its shiny head out.  I was more than 1/2 way through my run before it was what would be considered “light” out.  And it wasn’t until I was walking Rocky that it was officially light outside. 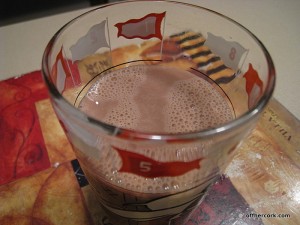 I slammed a huge glass of CS before the walk.  Since I sweated so much, I compensated for that loss with the CS and it was delish!  Unfortunately, Rocky’s walk got cut short because it started to rain.  When we got back home, I stretched and took the most perfect shower.  It was perfectly hot and steamy. 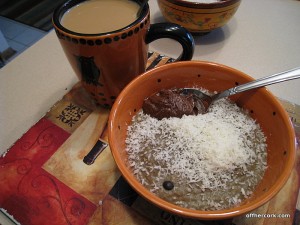 During the run all I could think about was a fabbo bowl of oatbran.  And chocolate.  So that’s what I had!  No bananas on hand but I did add pumpkin and blueberries to the oatbran.  And a huge scoop of chocolate PB and a sprinkle of unsweetened coconut.  I added the coconut to take away some of the brown sludge look to the oatbran.  I had a huge bowl with coffee and loved every minute of it.

After breakfast we had to run some errands.  I was finally able to go and pick up my pants that had been altered!  They all fit perfectly now and look totally amazing.  YaY!  After that Scott went to the bank while I headed over to a jeweler’s to inquire about my ring being sized.  I am now wedding-bandless.  They are going to size my ring for me and clean it, all done in-house.  Bonus, they are local!  Not a chain jeweler, whoo!

When we got back home, I was a starvin’ machine so it was time for lunch.  I debated putting some salmon in my salad, but since I knew we were having fish tonight I didn’t really want to double fish it today so I passed. 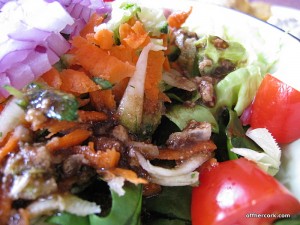 Salad was a smaller version of last night’s dinner:

With balsamic and olive oil on top! 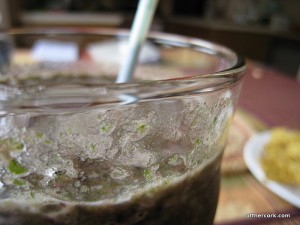 Delish!  I’m out of kale and fresh spinach so I decided to try frozen spinach.  It doesn’t blend quite as well as fresh (surprisingly) but it does the trick in a pinch. 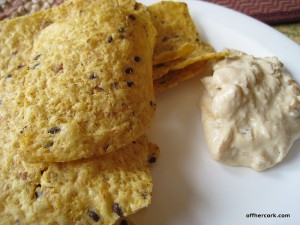 Some hummus and multigrain chips. 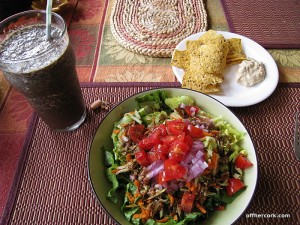 My lunch was fantastic and totally hit the spot!  I thought that I might not eat much of the chips and hummus but I ended up licking that plate clean like its name was Scott and it was business time.

After lunch, I prepped dinner!  Then I cleaned the kitchen and did stage one of cleaning the house.  Which consists of dusting and swiffering the floors.  As much as I hated to, we had to miss MT again tonight.  By the time we go back next week, we’ll have missed two weeks of classes.  Ack!  We just still had so much to do that making class just was not happening.

Once we realized that we weren’t going to class, we headed back out for more errands.  This entailed going to a pet shop (independent shop, does not sell animals) to pick up some shampoo for the kid and naturally I can’t just buy that.  So treats and toys later, we headed over to Big Bird for some things.  I’m wondering if Big Bird has stopped carrying Fage because I can never find any in their stores anymore.  I did find some pumpkin ale though!  Score!

When we got back home and groceries were put away, I gave Rocky a bath in preparation for Grandma’s arrival.  Rocky hates baths but at least he cooperates and just stands there letting me do my thing.

While we were doing that dinner was heating up in the oven.  Mmmm!

I decided to try an experiment!  I had a huge inappropriately sized zucchini in the fridge and what better way to handle inappropriate sized veggies but to stuff them, right? 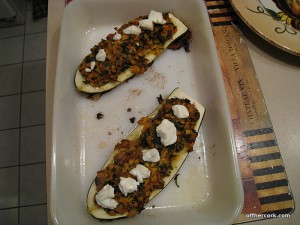 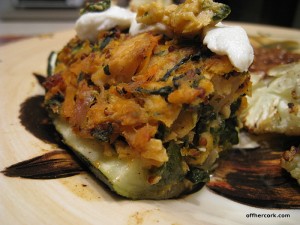 I used the concept behind salmon patties and instead of making a patty, just stuffed the zucchini.  Then I topped it with some goat cheese.  Yeah, basically heaven! 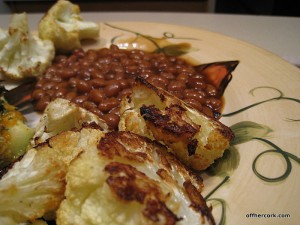 With roasted cauliflower which blows my mind it’s so good.  And baked beans!  Total guilty pleasure of mine although there’s no guilt! 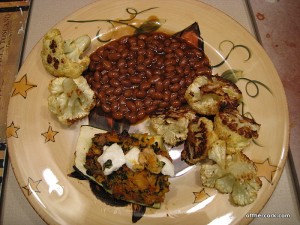 I had 1/2 a zucchini, a ton of cauliflower, and a good bit of beans.  Cleaned my plate like a good girl!

Alright guys, I’m off to get some rest.  Huge day tomorrow making sure everything is done before my mom arrives.  One last clean, laundry, and food prep.  Along with another grocery store trip to the main store we shop at.  And other stuff I’m sure I’m forgetting at the moment! :p  Tomorrow!