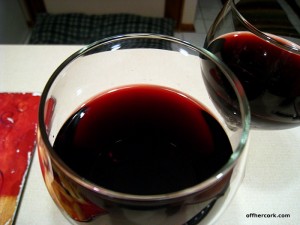 While we watched some Jim Gaffigan, I had a glass of red and 1.5 PB cookies.  Oh my goodness this cookies are so right up my alley!  Perfectly peanutbuttery moist and minimal sugar!  Yumlicious!

I slept like a rock last night! And bonus, Rocky let me sleep in till 8am. :o  Unheard of!  I was still in super sleep mode and had a bit of a sleep hangover when I got up this morning.  Do you get those or just me?  I am almost walking sideways for a few minutes till I get my bearings back. :p

I poured coffee, grabbed the laptop and settled down in the living room.  Apparently in my sleep hangover state, I forgot to snap a pic of the coffee!

I did catch an awful episode of Semi-homemade on FoodTV.  In all honesty, when Aunt Sandy’s show first started, I loved it.  It was fun and different and had great ideas.  And then it tanked and I don’t know why the creators thought it would be a good idea for her to start using pre-chopped veggies.  Now it’s all frozen chopped onions, pre-chopped potatoes and so forth.

Mah man got up and I headed into the kitchen to make some oaty oats! 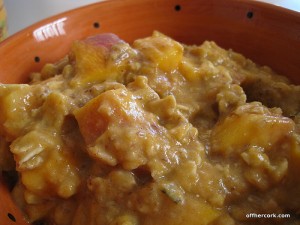 Heat all of that up till the mixture starts to bubble, then add in your oats.

Turn heat down and cook for a few more minutes making sure to stir on occasion.

Over breakfast Scott and I discussed the game plan for the day.  We have so much to do!  Part of that involves cleaning and organizing the house because my mom is coming to visit next week.  And the other part involved shopping for things to help clean and organize the house. :p  Sadly this meant that MT got put on the backburner today so we could get things done.

After breakfast, the first task was to go through all of our clothes we are donating so we could photograph them and make a list of everything being donated.  You would think this would be a quick task but it was not.  At.  All.

I wanted to go out before eating lunch but that was not going to happen because I was getting hungry and it was taking us forever to leave.  I tried to hold my hunger at bay with a new product. 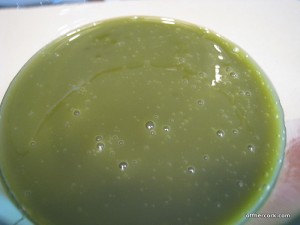 A green goodness smoothie by Bolthouse.  This has veggies, fruit, all those superfood grasses, but lots of other healthy things.  This thing was the flipping BOMB!  I split a small bottle with Scott and he agreed that it was fabbo.  I’m going to get more just to have on hand in the event I need some smoothie action but either don’t have the time to make one, or I’m on the run and need something to take with me.  If you dig on green monsters or smoothies, check it out!

Then I decided to get cracking on lunch.  Might as well by this point! 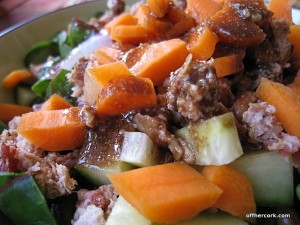 Salad!  With a chard base instead of lettuce.  Mixing it up!

Topped with balsamic and oil 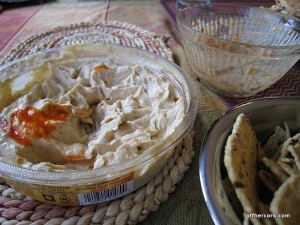 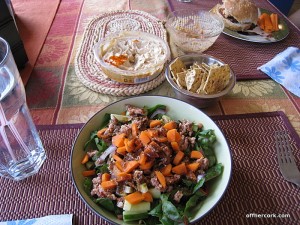 This salad was fantastic!  I’m going to get more chard just so I can add it to my salads.  It was hardy and provided a nice change of pace from my normal everyday salads.

Finally after lunch we were able to leave and run errands!  First order of business was dropping off the clothes.  Whew!  We still have another bag that needs to go but it can be dropped off at another time.  At least now some of the clutter is starting to recede.

Then it was off to Payless were I found two pairs of the cutest shoes!  A lovely pair of black heels and a nice pair of causal brown heels.  Then Target! For all manner of things like curtains, lotion, and other fun yet necessary items.  Target actually has some very cute fall and winter items out now.  Some very cute jackets that I might need to take a look at again.

I did buy some halloween jammie shirts.  Hey 6bucks, I can dig it!

Next stop was Kohl’s to look at some luggage which was crazy overpriced.  But I found a tshirt that is totally me and I can’t wait to show it to you!  I’m pretty sure you’ll agree that it’s right up my alley.

Eventually it was time to head home!  We were gone for a long time and it was pushing 7pm by the time we started back for home.  I know Rocky was probably wondering where the heck his dinner was at!

And all I have to say is thank goodness I had the foresight to prep dinner ahead of time!  All I had to do today was pop it in the oven.  Last minute I decided to make some shrimp but that’s no big deal.

While dinner was doing it’s thing, some chips made an appearance: 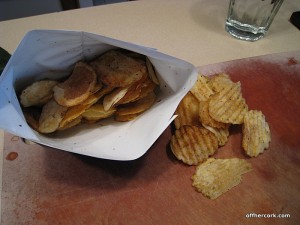 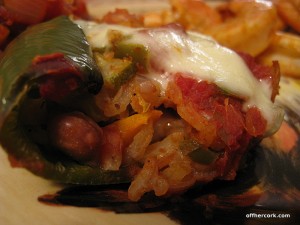 I made stuffed poblano peppers!  Stuffed peppers seem to be a running theme around the HQ lately!

Topped with some pepperjack cheese goodness! 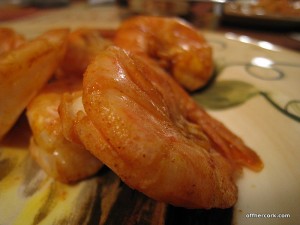 Peel and eat shrimp! That I just sauteed in a skillet for a few minutes.  They sat in:

For a minute before jumping in the skillet. 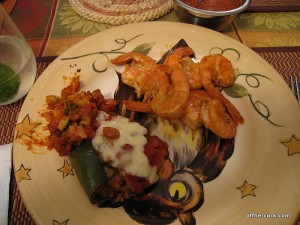 Sorry guys, I don’t even realize it till I’m writing the post!  There’s some homemade cocktail sauce for the shrimp or just for general eating if your savages like us.

Now Scott is hanging some of our new curtains and I’m off to make some tea and chill with my book for a bit.  Tomorrow guys!