In an attempt to better what we put into our bodies here at the HQ, I’ve started looking for better quality products.  One thing that we use a lot is soy sauce.  When one half of the HQ population is Asian and the other half just happens to like having some Asian in her, the use of soy sauce sky rockets.  I use it almost every time I make roasted veggies.  And I use it in soups, sauces, and dressings.

Basically whenever I can find a reason to use soy sauce, I will manhandle it into a recipe.

But a lot of soy sauces in the market don’t have a great ingredient list.  And while I understand this product is a processed item, I still think it’s a fair assumption to be able to purchase a quality processed product.  Yes?  We all agree?  Great!

My first and so far only attempt at purchasing some better quality soy sauce was buying 365 Brand Soy Sauce.  365 Brand is the Whole Foods store brand.  When I think 365, I think quality and care went into making the product.  The ingredient list wasn’t too horrible so I purchased it.

I am here to tell you that this flipping soy sauce has become the bane of my existence at the moment.

The flavor is not very intense which caused me to use more which then caused whatever I was trying to flavor to be overly salty tasting and generally yucky.  This did not please me.  Inedible food is such a waste because what can you do with something that is too salty?  Exactly.  This made me so grumpy.  But I could work around that and just realize that I can’t use that much and find other ways to enhance the flavor of what I was making.

I adapted.  It’s what foodies do.

But what got me the most frustrated – to the point of me wanting to crush the stinkin’ bottle with a meat mallet – was the bottle itself.  I have no idea what Whole Foods was thinking when they created the bottle for the soy sauce but hot damn it drove me bonkers.

First it had a little plastic top under the cap, so when you went to use it, it came out in dashes and shakes.  You couldn’t pour it out.  Think something similar to the top of a red wine vinegar bottle.  That little plastic device which means you have to work your wrist skills like mad and shake it shake it shake it.  Exactly like that.  Annoying.  But not only was there a crazy plastic moderation attachment, it would collect the soy sauce inside of it.  When you put the bottle back down, the soy sauce would slowly leak out, down the bottle and stain whatever the bottle was sitting on.  Living a nice soy sauce ring where ever you put it.  Stupid plastic thing!

I ripped that sucker off.

Instead of triumph, I was smacked down yet again.  Did you know that the actual cap to the bottle holds more sauce than that plastic thing?  Oh it does.  And it will rain even more sauce down the bottle and on to the counter, the fridge, the cutting board and so forth.

Oh but I’m a fighter gang.  Don’t think for one minute that I let that bottle get the best of me.  After calling it a messy dribbler, I kicked the bottle to the curb and made that soy sauce my bitch. 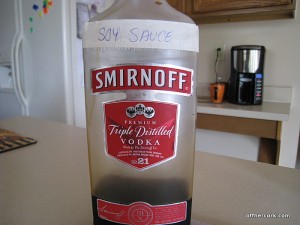 How do you like it now soy sauce?  Can’t get all messy up in here any more can ya?  That’s right punk, that’s how we roll.  Suckah!

I don’t even have a picture of the original bottle because in my frustration, I threw it out before snapping a photo.  This should tell you something because I take about 50 pictures of everything for a review and I’ve got nada.  Except my new and improved soy sauce bottle.  Which is much better, makes a statement, and is a great conversation starter.

It should go without saying but I’ll say it anyway, I can not recommend 365 brand soy sauce.  Bottle issues aside, the flavor is just not there and it tastes very salty.  More salty than other soy sauces I’ve had.  I’ll move on and find something else to use once the current vodka soy sauce is kicked.