Today was a totally normal Saturday. 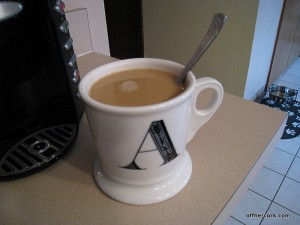 After taking care of Rocky, I poured myself some coffee and headed into the office to scope out the situation.  I looked at blogs but either my reader wasn’t updating or no one was blogging because there were barely any entries.  I moved along and putzed around online while still sipping the Joe.  Then Scott got up and I made some breakfast. 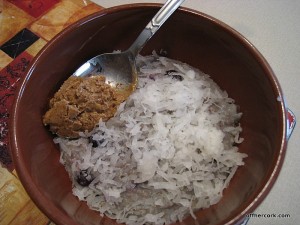 Oatbran sans banana because I’m out.  Booo!  This had blueberries though which made it lovely.  And a small scoop of vanilla almond butter and a bit of coconut.

After breakfast we headed over to MT to get our sweat on.  It was nice to get some cardio action going!  I had been looking forward to class and working out.

Off to Sam’s after class! For much needed mixed greens and other various Sam-esque items.  I scored some new books and some new slippers.  Wheee!  Back home for some eats!

Because it was late I didn’t want to have a huge meal but I did know that a smoothie was in order.  I was missing them and feeling so off balance! 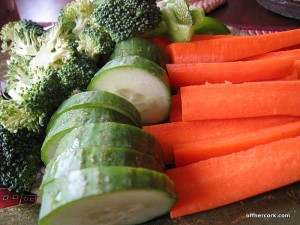 I had a plate of raw veggies: 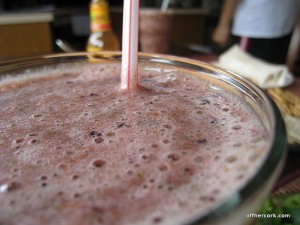 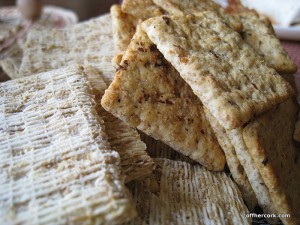 And crackers for hummus!  Oh how I’ve missed hummus. 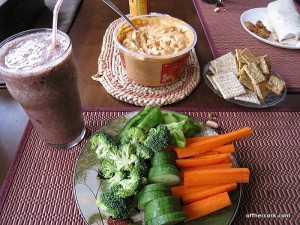 I decided to just go for it and buy the huge ass tub of Sabra hummus at Sam’s.  It’s over a 1lb and a half! :o  I can only get Sabra at one other store and I hardly ever go there.  Sam’s tub it was.

After lunch, I took Rocky out for a quick walk.  Then I showered and got busy cutting Scott’s hair.  While Scott showered, I laid in bed and read.  It was glorious.  When Scott was done showering, we talked about what to do with the rest of the evening.  It was going on 6pm by this point.  I was a bit hungry and there was brief mention about going to dinner someplace.  And then possibly hitting the grocery store afterwards.  But in true Andrea fashion, once I’m showered and in my jammies, I don’t really want to leave that state of being.  I decided to make some snacks instead. 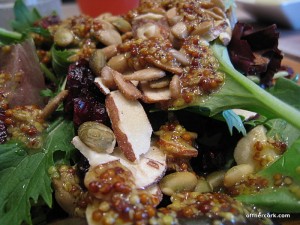 Topped with a whole grain mustard maple dressing (I made). 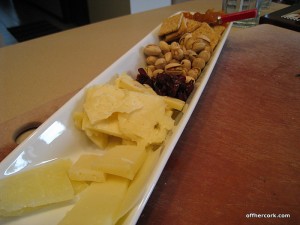 Cheese plate!  From left to right: 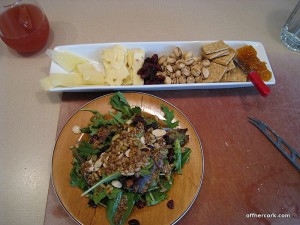 YUM! We have not had a cheese plate like that in what seems like a very long time.  It was delish!  My fave combo is a cracker with a bit of preserves and then topped with some of the cheddar.  Heaven!  I had a few of those, some pistachios, a small bite of manchego, and a small bite of asiago.  Mostly I was focused on the cheddar.  Sooooo good!

And that’s where we’re currently at! I dunno if there will be more eats and I don’t know what we’re going to do now.

I very much would love a glass of wine but it’s Saturday night.  And I just got talking about how I try not to have wine on Sat. nights during 1/2 training because my long runs are on Sunday.  But tomorrow’s long run is only 4 miles.  No biggie.  *sigh*  I’ll have to decide!