I still keep typing July in my title!  Anyone else having troubles with the fact that it’s August?

I had a crap-ton to get done today and I set my alarm for 6am.  Last night, I went to bed right after SF class.  I read for a minute, talked with Scott, and then it was lights out, grandma needs some sleep!  But when the alarm went off at six, instead of it being all sunny outside, it was very dark.

I do not run in the dark.  I know some of you do, but I’ve tried it and I don’t like it.  I can’t see anything!  I went back to bed instead.  Then it started thundering, well I don’t run in that either unless it comes around the corner and surprises me.  I laid there for an hour waiting for the weather to make up its mind.  At 7am, I finally got up to take care of Rocky before it started raining.  By this time it was lightening out as well.  I knew that rain was about to hit any second.  Grrrr I was totally ready for a run!

I came into the office and handled some bidness instead.  I waited patiently for the weather to change in my favor because dangit I wanted to run!  The rain was short and I busted butt to get changed and out the door.  Training schedule had me doing a 3mile run today.  I had to cut it short because I got a wicked cramp.  I stopped to walk twice and that didn’t help.  I jogged really slowly back home.  It was less than three miles but it couldn’t have been by much.

I walked Rocky and then took a very lovely super hot shower.  Then it was time for breakfast and to feed the hungry beast! 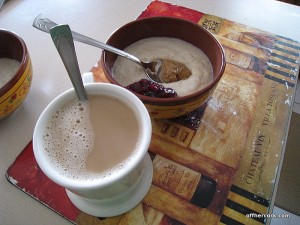 I went back and forth about what to have and eventually decided on some oatbran.  It turned out to the best thing ever and exactly what I needed this morning!  The only thing I didn’t add was some extra protein powder.  Since it was already close to lunch time, I nixed it.  The last scoop of rhubarb blueberry sauce and vanilla almond butter were my mix-ins.  Coffee along side!

I got work done and got plans for tomorrow started.  We have a big day tomorrow and I can’t wait to share a little about it.  Wooot!!

Then I had to get busy making some lunch.  You know the drill. 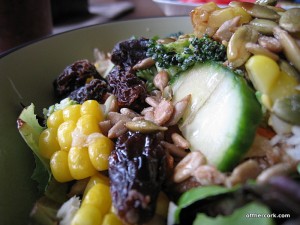 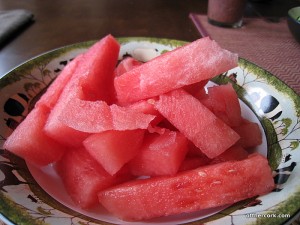 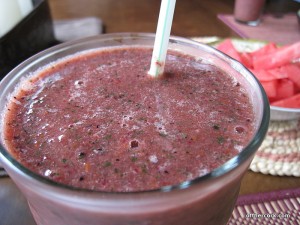 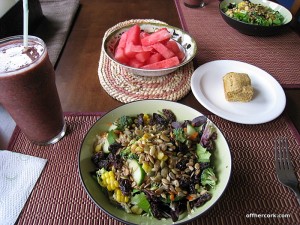 That little piece of cornbread on the side was for me but I decided I didn’t want it so Scott ate it.  He also told me he snacked on some cornbread last night for his bedtime snack.

The smoothie was fantastic and totally made up for yesterday’s monstrosity.

I have prepped dinner as much as I could so it would be ready to go when we get back after class.  I’ve got loads to get done, so I need to get back on the move.

Question for you Facebookers! I want to create a page for OHC.  Now when I go to sign up it’s asking for my name and so on.  Do I just put in Off Her Cork as my name?  Grandma has zero facebook knowledge kids! Help a sister out.