Hi guys!  Rocky let me sleep in until 8am this morning! :o  Now only if I had been getting awesome sleep, that would have been perfect.  Ah well.  I got up and got him taken care of, and then it was time for coffee. 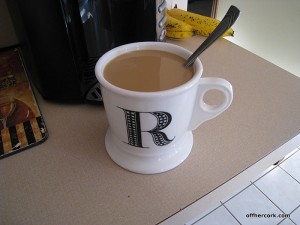 Which I was only luke warm about this morning.  In fact my body sort of seemed like, “Hey sister, we don’t really want this today.”  It left me blah and more blah.  And those few sips of that really bad wine I had last night put me over the blah edge.

I said to Scott as I was making my breakfast, “Now is the time where I wish I had a juicer because I could really go for some juice goodness right now.”

Where did that come from?! I don’t know but my body was screaming for some raw produce up in the hizz-owse.  Is it something worth exploring further or looking into?  I’m not sure about that either.  I’ll have to get back to you. 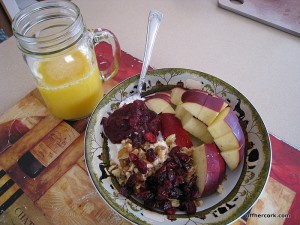 To satisfy my need for produce, I had a red delicious with yogurt, crushed walnuts, and some rhubarb blueberry sauce.  Don’t worry, the sauce is almost kicked so you won’t have to endure it much longer. :p  And some OJ for the juice fix.  Mmmm this breakfast was fantastic!

Then I got dressed and took my punk out for his walk.  When we got back I started some laundry and other life organizing bidness.  It wasn’t too much later that I proclaimed to no one but myself that I was ready for a salad and some smoothie action. 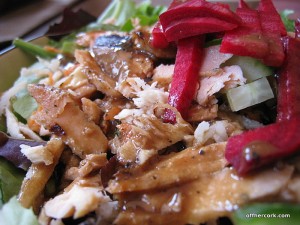 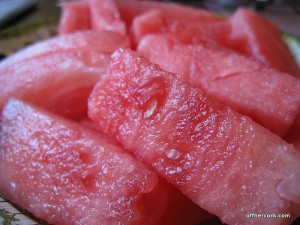 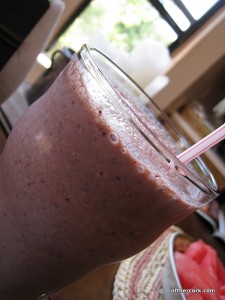 Smoothie with loads of changes: 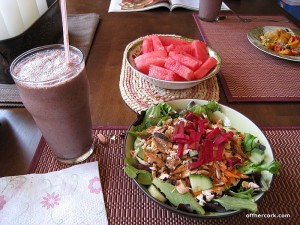 I didn’t want the nuts going to waste so they got included into the smoothie.  I also have a container of milk open that I don’t want to turn without using.  So many people add nut butters to their smoothies, I decided to give it a try.  In short, yuck.  The smoothie was drinkable but not preferable.  I’m going to stick with juices from now on, they taste so much better.  Even soymilk in smoothies tastes a lot better than regular milk.  And no more nut butter.  I’m keeping that paired with oats or oatbran.

The rest of lunch was fantastic though!