Hi guys!  We hit the Irish Festival late yesterday evening.  We arrived maybe going on 5pm and walked around for about an hour or so.  There were so many things and booths to see it was a little overwhelming.  I learned some history about Scott’s last name and also that the local Irish dance troops sure do love their super curly wigs.

Both of us were hungry upon entering the fair but I honestly wasn’t looking to eat fair food.  While I love me some sausage and ‘kraut every so often, last night was not one of those nights.  Once we got our fill of the fair, we headed out to get something to eat.

Surprisingly a lot of the restaurants in downtown Dublin were closed.  It’s been a long time since I’ve seen a restaurant closed on a Sunday.  One place that was open was J. Liu’s. Be forewarned there is music on the website that will start playing immediately. 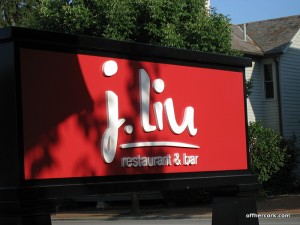 We’ve been meaning to try it out for ages and last night was the perfect opportunity.  It was a great evening so we got to take advantage of the patio seating.  The one drawback to the outdoor seating is the road noise.  It can be a little hard to hear with the traffic buzzing along.

Scott was highly Hangry even though he will tell you that he clearly was not.  Which is a big indicator that he was.  Follow?  We decided against appetizers and went straight for meals. 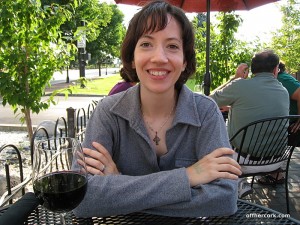 I don’t know what’s going on with the droopy eyed looking I’m sporting in that pic.  I decided on a glass of merlot to go with my meal. 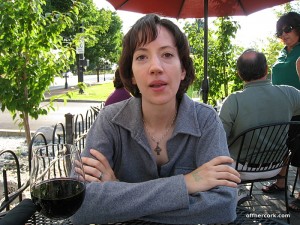 Here’s me getting frustrated with Scott.  I’m complaining that I never know when he’s going to take a picture so I feel like I’m smiling for 10 minutes. The whole time wondering what he’s doing. 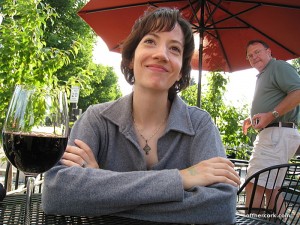 He said he does that on purpose and this is my, “You’re a bastard.” look.  Check out the guy behind me, he thinks the same thing! :p 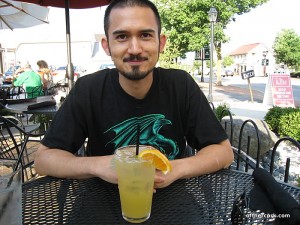 Scott ordered a mango margarita which was potent indeed. 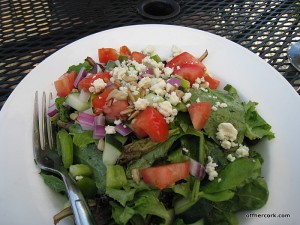 I started off with a house salad with actual mixed greens!  Hooray!  And tomatoes, cucumbers, red onion, green pepper, sunflower seeds, and some gorgonzola all topped with a balsamic dressing.  It was seriously good and I kicked that whole thing. 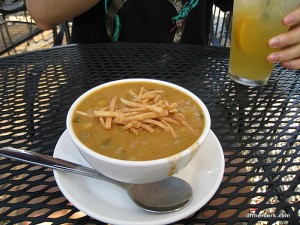 Scott started off with chicken tortilla soup, which was the soup of the day.  I had a few bites and it was also very good.  He mentioned that there wasn’t much chicken in it though and I said that would be perfect for me! :p  I’d rather have more veg! 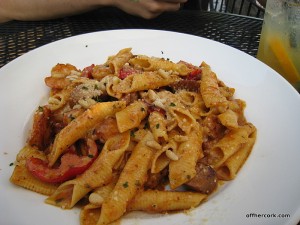 For his main meal, Scott ordered the Pasta Diavolo.

It had shrimp, chorizo, and roasted red peppers all in a spicy creamy tomato sauce.  I had a few bites and it was delish!

My main meal was the hoisin glazed salmon made with house-made hoisin sauce.  It came with coconut basmati rice and ginger glazed carrots and snow peas. 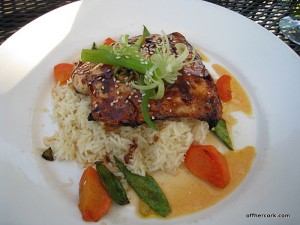 Doesn’t it look pretty!  The salmon was cooked to perfection and had great flavor.  The hoisin wasn’t quite as flavorful as I thought it was going to be but it was still very good.  The rice was very coconuty and fabulous!  Even though I didn’t eat much of it, I enjoyed it.  My only disappointment with this meal were the carrots and snow peas because I expected more! I was looking forward to a whole side of veggies and was a little bummed that there were only a few small bites.  Those bites were great though!

Would I get that dish again?  Yes and maybe I would ask if I could some how get some more veggies.

We fully enjoyed our time at J. Liu’s.  We loved the laid back atmosphere paired with great food.  Our server was awesome and checked in on us constantly which left us feeling taken care of.  There was no rush either, everything was brought out in a leisurely manner allowing time for conversation and relaxation.  If you’re in downtown Dublin and looking for a place to grab lunch or a nice cozy dinner, give J. Liu’s a try!

When we got back home, we took Rocky out for a walk and then it was jammie time! 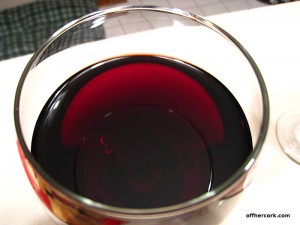 I had another glass of red while we watched TV and decided on how to spend the rest of the evening.  We came to the conclusion that it had been far too long since we’ve seen Godsmack (one of our fave bands) so we watched a concert of theirs we taped.

Scott opened a white and some vegan chocolate pudding made its way out of the fridge. 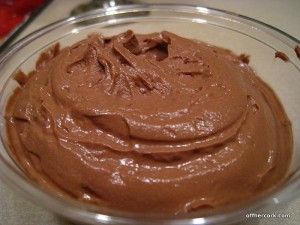 I had a two sips of white and was done because it was horrible.  I’ll just say it smelled like pot and leave it at that.  Ugh.  But it worked out because I didn’t need it anyway.  I don’t do well with three glasses of wine. I was totally caught up in the moment of jamming out to Godsmack.  “Oh yeah I’ll have another!”

No, no, no.  And it tasted bad and my body was like, “Um, no we’re not digging this.”  and I listened.  After the show,  I hit the hay because I was one tired girlie.