Hi guys!  Look at my snackies! 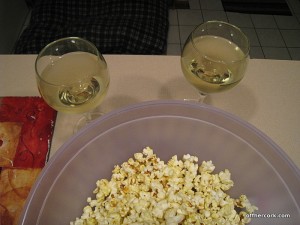 I had a glass of chard which was really sweet for a chard, odd.  And some popcorn!  Mmmm salty goodness and because I had popcorn with wine, that shows off my Klassiness.

We attempted to watch some Lewis Black last night but satellite was being a dinkus so we moved on to some Venture Bros.  Oh season 3, I love you!

I did finish my book last night as well!  It ended alright but the rest of the book is fantastic so I’m giving it a thumbs up!  If you like crime stuff, it’s called The Likeness by Tana French.  Very good and an easy read.

Then it was off to bedtimes, I was exhausted!  I stayed up past my bedtime trying to finish the book.  Doh!  I slept like a rock though and woke up around 7ish.  Rocky-love got taken care of and then I poured some coffee and headed into the office. 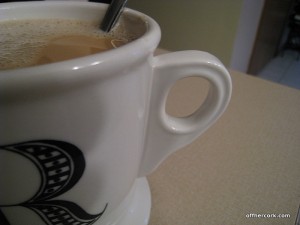 I tried to catch up on things as best I could.  Emails and blogs and such.  I think it’s time to reorganize my Google Reader is in need of some serious help and possibly a trim.

By the time breakfast rolled around, I was starving!  And you know what was on the menu! 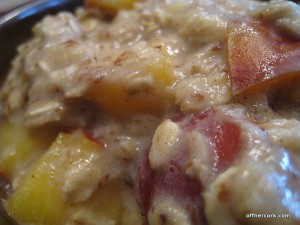 Two nectarines today.  And I made sure to pile my bowl high because I was ready for food!

Naturally we are out of yogurt, well let me correct that.  We have like a spoonful of yogurt left in this house.  And since we’ve been “out” of yogurt, I’ve wanted nothing more than to have a big bowl of it.  Curses! Isn’t that always the way?

After breakfast, it was time to hit up some MT and get a workout going.  I was in such a blah mood this morning.  Monthly blah, and I just didn’t want to do anything.  I didn’t want to have to leave the house at all.  I only wanted to hole up and stay in my jammies.  Too much to do, so that is not possible.  Plus working out always makes me feel better and we had errands to run after class so we needed to go.

And we did!  And it was a great class and I felt a little bit better.

We ran quick errands, none of which included heading to WF.  Boo!  When we got back home it was time for lunch! 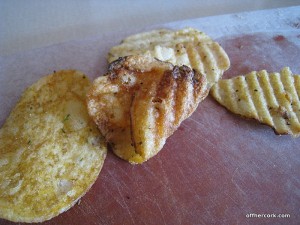 I stuffed my face with some chips first.  This PMS bidness this month is kicking my ass.  All I want are chips and I don’t even eat chips really!  Crunch and salt is what I want.  So I keep taking a chip here and a chip there.  Finally I decided to just pull out an Andrea sized portion and have at it.

Then I made lunch and tried to find my sanity again. 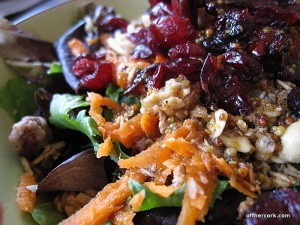 With a balsamic mustard maple dressing. 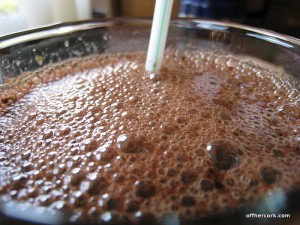 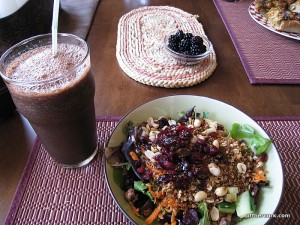 And there’s some extra blackberries in the background over there.  Lunch was divine and I may or may not have snagged a few bites here and there of Scott’s pizza.  Literally, that was not a euphemism.  Because I know you went there.

Kitchen duty and finally a shower!  And then I was wiped out.  I didn’t want to go run any more errands.  I wanted to do nothing.

So I put on one of Scott’s t-shirts and crawled into bed with a new book.

Whenever I feel like poo, I always put on Scott’s clothes.  I dunno why but it makes me feel better.  I wasn’t in bed for very long because Rocky was pitching a fit and ready for his walk.

We ran him out for a walk and then once we got back home, I put on my jammies, made a drink, and hit the couch with my laptop.  My drink was just seltzer with a slice of lime.  Awesome!

OHC is coming up on a year old! So I’ve been fiddling with some site things because I’m hoping to revamp it.  Wooo!

Then it was time to get started on some dinner.  I didn’t even feel hungry but got busy anyway.  And then I proceeded to inhale everything.  I saw Lauren make some coconut fish the other day and that has been on my mind ever since!

Tonight was fish n’ chips (and some other random veggies)! 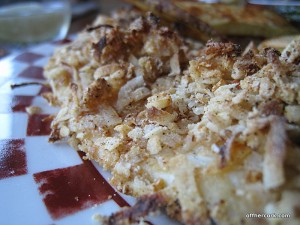 Hello mama!  This was soooo good I couldn’t get enough of it.  Coconut and walnut crusted tilapia. Jealous? 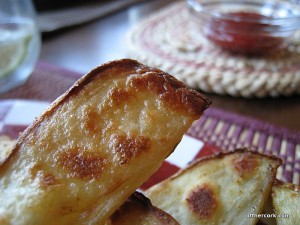 And the chips! Oven roasted russets.  Olive oil, seasoned salt, garlic powder, and some pepper.  Roasted at 400 for about 10 minutes. 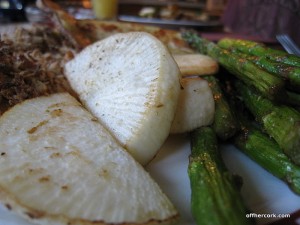 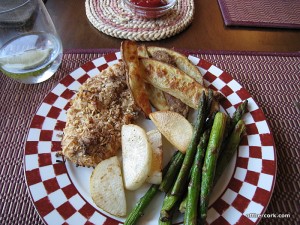 Look at that plate of food!  I inhaled that and then proceeded to start picking at the fish on Scott’s plate while we had this conversation because I brushed up against his arm.

Scott: I’m having a heat surge (This is the more manly term apparently).

Scott: Do you get that?  Where you think you’re going to be hot or about to get hot, and then boom you’re hot?

Me: Sometimes but usually when I’m stressed out or nervous. They’re called hot flashes.  Normally they occur during menopause though.  I guess you’re having a menopausal episode.

Me: Penispausal! Do you think I can put this on the blog?

Scott: You totally will.