Hi guys!  I did indeed have wine and dessert last night! 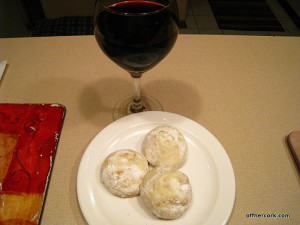 Red wine and 1.5 Mexican wedding cookies made by WF.  We watched a comedy special last night featuring a bunch of random comics.  Scott and I love comedy so much!  But we are extremely picky about what we find funny and what we don’t.  It’s not even subject matter related because we’re pretty easy going and not easily offended.  So swearing and off color jokes don’t phase us at all.  It’s more about how the comedian moves, talks, and approaches their routine.  We saw several bad comics in that lineup we watched and sadly most of them were women.  I really want to support women comics but I’m just not finding any that are funny.  Example, I really really want, with all of my heart, to think Sarah Silverman is funny.  But every time I watch one of her routines, all I want to do is scratch my ears off to make the pain stop.  I find her stuff horrible and totally not funny.  Her small part that we watched last night, I was thankful for it being less than five minutes long because it was so terrible.  Blah! I know loads of people love her but I am not one of them.  However, Eugene Mirman sends me into fits of laughter.  It was Comedians of Comedy or something along those lines, that we watched last night.

Once it was over I crashed out in bed.

I tried sleeping in this morning but it wasn’t happening.  Oh well.  I got up, took care of Rocks and then got started on my day.  Oh Monday, why do you have to be so quirky sometimes? 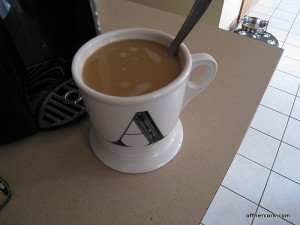 I wanted yogurt and granola.  I went downstairs to check for backup yogurt only to discover that we don’t have any!  Well I wasn’t about to eat the last of the yogurt so I had to move on to something else.  I didn’t feel like oats or oatbran.  After pacing around the kitchen for 45 minutes, I finally decided on a whole wheat pita with PB and honey. 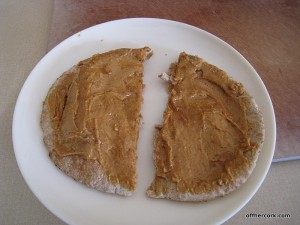 It was okay but I only ate half because somehow breakfast without fruit seemed so very wrong. 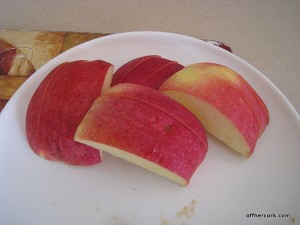 I pulled out an apple to munch on.

And I got busy on the always exciting Monday task of laundry.  Took Rocks out for his walk in the gorg weather we are having!  And then back home for lunch prep.

I bought a yellow watermelon at the store over the weekend and as I was chopping it up, I found out it was rotten.  YUCK! 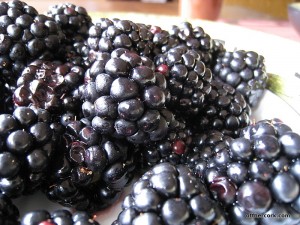 Blackberries for lunch it was!

I started pulling out other things for either sides or for Scott to eat.  Disaster!

I pulled out some leftover guac. Bad.

I just started stomping around the kitchen and putting together lunch all Grumpy Dwarf like.  Here’s what we had: 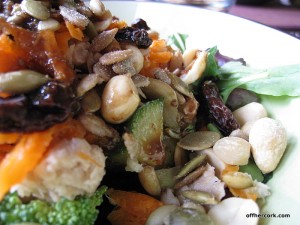 Salad! With the much better mixed greens! 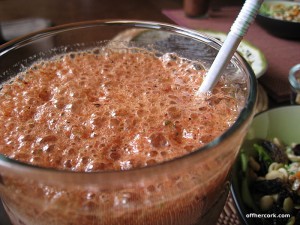 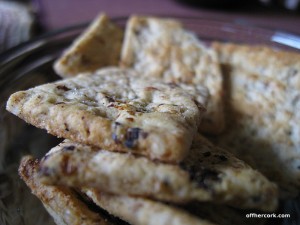 Some crackers just for munching. 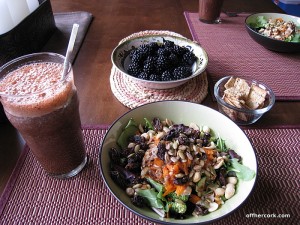 I didn’t have too many of the crackers because I prefer them dipped in something and all my dips were toast!  Salad and smoothie were mighty fine.

I cleaned up the kitchen and Scott brought in the mail.  I ordered what I thought was going to be a fabbo shirt, only to have to return it because it fit weird.  I went a size up and that arrived today.  I was pretty excited about it, until I realized that these shirts are just plain weird and even this one fits funny.  I hate to have to return it and be a pain so I’m thinking about keeping it.  But I totally don’t like it!  Ack!  And I’m pretty bummed about the ill fitting shirt.

Thankfully today we have leftovers! Because that bought me some extra time to do some work and not have to worry about taking time out to cook. 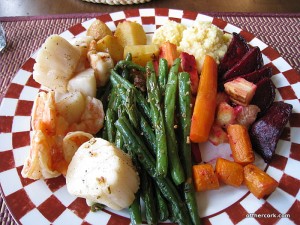 No closeups because y’all have seen it before!

Alright kids, I’m cutting out so this post stops being a cranky-butt.  Catch ya tomorrow sweets!