Hi guys!  I’m doing a post early today because my afternoon and evening are jam packed and I might not have time to chat about lunch and dinner until tomorrow.

So let’s get to the wine!  A sip while watching House Hunters. 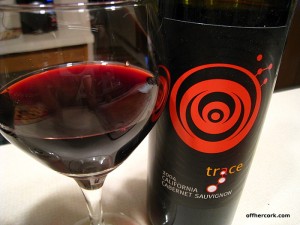 And then, oh yeah, time for dessert baby! 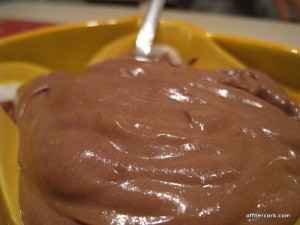 Can we say vegan chocolate pudding?  That this sister right here made?  You got it!  And it was delish!  I need to play with the recipe a bit more but it’s crazy easy!  We finished the evening watching some Chris Rock and then I zonked right out.

I got up at 7am this morning dragging just a bit.  Not enough sleep because I hit the hay way after my bed time.  Family guy pulled me right in!  I poured some coffee and got straight to work in the office getting things done. Because I am determined to be productive today! 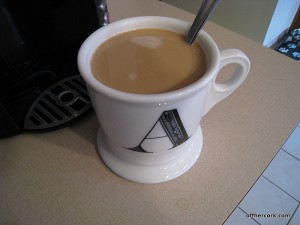 Then I woke up my loves and made some breakfast! 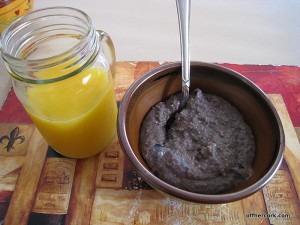 Blueberry oatbran sans banana because I’m out.  I’m also out of kale and spinach which is causing me some distress.  I will probably have to make an emergency stop today as I’m running around.  I had some OJ instead of another cup of coffee and didn’t even finish that.  The oatbran had chocolate protein powder mixed in which is just too yummy for words.

Scott and I are off to run some errands!  I have to go see the lovely Inggrie, at Tehku to pick up some blackberries she’s holding for me.  Then it’s off to Microcenter for some parts for the new addition. We’re building him Frankenstein style.

And then lunch out.  And then back home to get purty because we’re going to a party!

Columbus Collective is having their official launch party tonight and fund-raiser for Pelotonia.  Scott and I were invited to attend, so expect pictures and recap this weekend!