Hi guys!  I got the afternoon munchies, I think out of boredom honestly, but I still ate something. 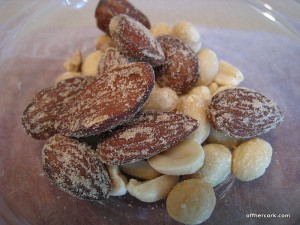 I snacked on some peanuts and smoked almonds.  Mmmm nuts!  Just a few nibbles while I made dinner.  Scott and I discussed how we have not had spaghetti in a very long time.  Since I don’t really eat too much carbs, pasta isn’t on my radar as much anymore.  Oh sure we have it on occasion, pumpkin mac’n cheese anyone?  But it’s really not my first choice as a meal.  However, Scott totally digs on spaghetti and I thought it was time he had some darn sketti. 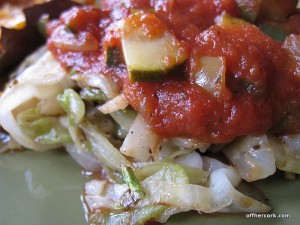 But since I didn’t want it, what would I have?  Well, I really love sautteed cabbage and I love cabbage + tomato sauce.  I happened to have some cabbage that needed used up, so solution solved.  I had some sauteed cabbage with spaghetti sauce on top.  The sauce was super simple sauteed onions, green peppers, zucchini with seasonings.  Added in some crushed tomatoes and a small dollop of tomato paste to make it all delish. 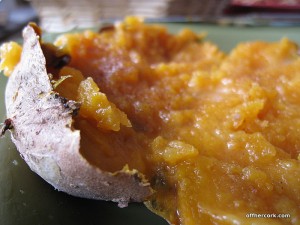 I also had a small baked sweet potato on the side with a tiny bit of butter and cinnamon sugar. 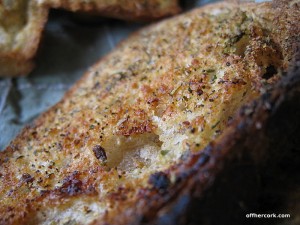 Just because I wasn’t having official spaghetti doesn’t mean I don’t get garlic bread.  Thinly sliced whole grain bread with a bit of butter, garlic powder, and Italian seasoning toasted up in the oven. 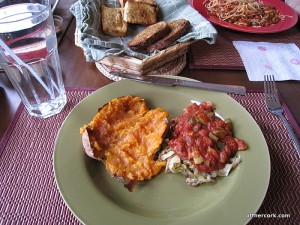 Dinner!  I thought the potato and cabbage would be a weird pairing but it worked out really well!  Dinner was tasty but a little heavy and too carb loaded.  I had both slices of bread which for me is a good bit of filler.  Blerg. I don’t feel icky, just weighted down and I don’t like that feeling.  But moving along!

Now I need your advice! On my to-do list for this year is to explore the city more and to meet new people.  But I’m horrible at mingling in large groups.  What are you best tips for mingling and becoming involved in conversations?  How do you handle walking into a crowd of people you don’t know?  Share!