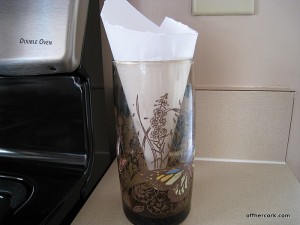 I don’t know about where you live but here at the HQ we become fruit fly and gnatty central.  It becomes craziness, causing me to have temper tantrums with made up curse words as I try to bat, swat, and swing the gnats into oblivion.  My husband has researched and thus tried every idea to help us battle the gnat and fruit fly problem.

We have only found one solution that works for us, Apple Cider Vinegar.  I will now let my husband explain how to create your own gnat trap at home (Because I’m lazy and I also have no idea how to make one!):

You’ll want something that isn’t too wide or skinny, or too tall or short. If you choose a drinking glass, you probably want to choose one you no longer actively use (unless you don’t mind later drinking out of the glass you drowned a bunch of fruit flies in…). You may also be able to reuse a jar (though be sure it is clean and odorless). 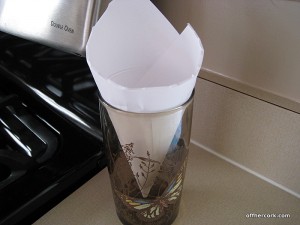 The goal with the barrier is to provide an opening through which the fruit flies can enter (attracted by the bait) but which prevents them from being able to leave.

A simple and effective barrier is a piece of paper rolled into a funnel/cone shape. You’ll need the glass from step 1 handy as you work out the exact cone to suit the glass. The tip of the cone should provide a small opening no bigger than a coffee bean, maybe even half that size. The large opening of the cone will need to be of a wider diameter than the top of the glass so that the funnel can rest on its sides inside the glass. When in the glass, the funnel tip should be about an inch from the bottom, and its opposite side should extend at least an inch over the lip of the glass.

Once you’ve worked the piece of paper into the proper shape, tentatively tape it to retain its shape. Try it out in the glass again. Again ensure that the tip is about an inch from the bottom of the glass, and especially now ensure that the cone is truly round and that when set into the glass, it provides a “seal” around the lip of the glass. With the funnel in place, the only way in and out should be through the small opening in the tip of the funnel.

Add more tape to the paper to secure the shape once it has been finalized.

(As an alternative barrier: you may be able to get away with just covering the top of the glass with plastic wrap and using a toothpick to poke a few holes in the wrap.)

Our bait of choice is apple cider vinegar (ACV). Some people use wine, which we’ve tried with less success, but who wants to waste wine on killing insects? Be sure the funnel has been removed from the glass and pour in a slight amount of ACV. When you put the funnel in place in the glass, you’ll want a gap between the tip of the funnel and the ACV.

You can also add a couple drops of dish soap into the ACV to break the surface tension (to prevent the fruit flies from treading the surface). We have success even without adding dish soap.

Place the trap in the vicinity of the fruit, trash, or other area that seems to be attracting the fruit flies. Relocate if after most of a day you stop seeing any more fruit flies entering the trap.

If after a few days you begin to notice a resurgence in fruit flies flying about, the potency of the ACV may have diminished and you may need to pour the contents of the glass down the drain and refill with the same level of more ACV. Of course, if the contraption is especially successful, then a change and refill will be warranted.  The funnel can continue to be reused.

The fruit flies are attracted to the smell of the ACV.  They’ll fly down the funnel and through the smaller hole.  Once in the glass, they are essentially trapped.  They’ll crawl around the inside of the glass and try to find an opening near the top, which is blocked by the funnel.  They aren’t smart enough (or as able) to fly back through the small hole.  If not outright, eventually they’ll land or fall into the ACV and meet their maker.

There you have it guys! Step by step instructions from OHC HQ’s official Gnat and Fruit Fly Wrangler. The summer season and early part of fall is when we have the most gnats and fruit flies so we always have a trap out and about. Sometimes two depending on how much fresh produce I have out on the counters. If you’ve got fruit fly issues, give this a try and see how it works out for you!

8 thoughts on “Tuesday Tip: To Catch a Gnat”