Hi gang!  I cannot even tell you how full yesterday’s lunch kept me.  It was going on 8pm and I still wasn’t very hungry.  I sort of just wanted to pick at things.  I could have completely not eaten a thing and been fine though. :o  Either the lunch was major filling or my body just isn’t used to that kind of heavy lifting in the afternoon and it didn’t know what to do.

Seriously though it did not sit heavy in my stomach except for right after I finished and walking around took care of that.  I just wasn’t hungry.  So weird!  But since I was in the mood for picking, I made a snack plate for Scott and I to share. 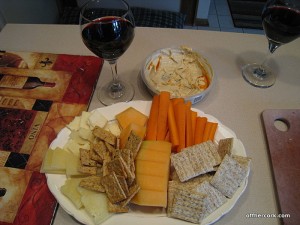 Ta-da!  From left to right:

The cantaloupe was so good, I probably could have had that the rest of the night.  I focused on that, carrots, and crackers.  I only had a few nibbles of cheese.  I had cheese in the wrap for lunch so I didn’t really need more yesterday.  While we snacked, we watched To Catch a Thief.  Not too shabby!  I do have to say the way people fall in love in older movies cracks me up.  The know each other for two minutes and all of the sudden it’s true love! :p

I could have easily went to bed at 10pm but I stayed up a bit longer to snugs with my huns.  Then before 11pm I headed up and crashed it in bed.

This morning I got up around 7ish to get the day started!  I took care of Rocky and had some coffee. 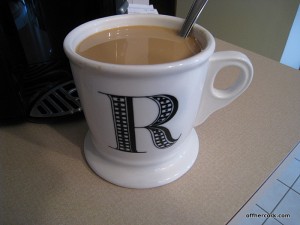 Mmmm bliss!  I did some computer stuff and then a bit later got Scott up.  Time for breakfast and I kicked up the oats today. 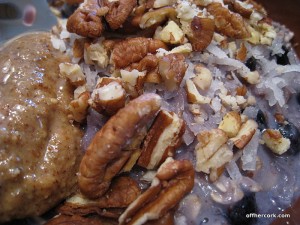 1. Because I wanted to see if I need a bigger portion and 2. Because we’re going hiking today and need the fuel.

Mix-ins were coconut, crushed pecans, and some vanilla almond butter.  YUM!  This was filling and I couldn’t finish the whole bowl but close!

We’ve got a big day ahead of us!  We’re heading out to a nearby lake and park for some hiking, picnicing, and relaxing.  I’m going to see what kinds of foods I can pack and also get a bag packed for Rocks.  Then we’re off!  I’m not sure if I’ll be posting again today but I’ll try if I’m not too wiped out.